Drought conditions persist, and a look at some of the worst droughts in our past

HARRISONBURG, Va. (WHSV) - The updated drought monitor shows worsening drought conditions with no relief in sight. The drought monitor is updated every Thursday morning and is available on the weather section of whsv.com. Just click on weather maps. 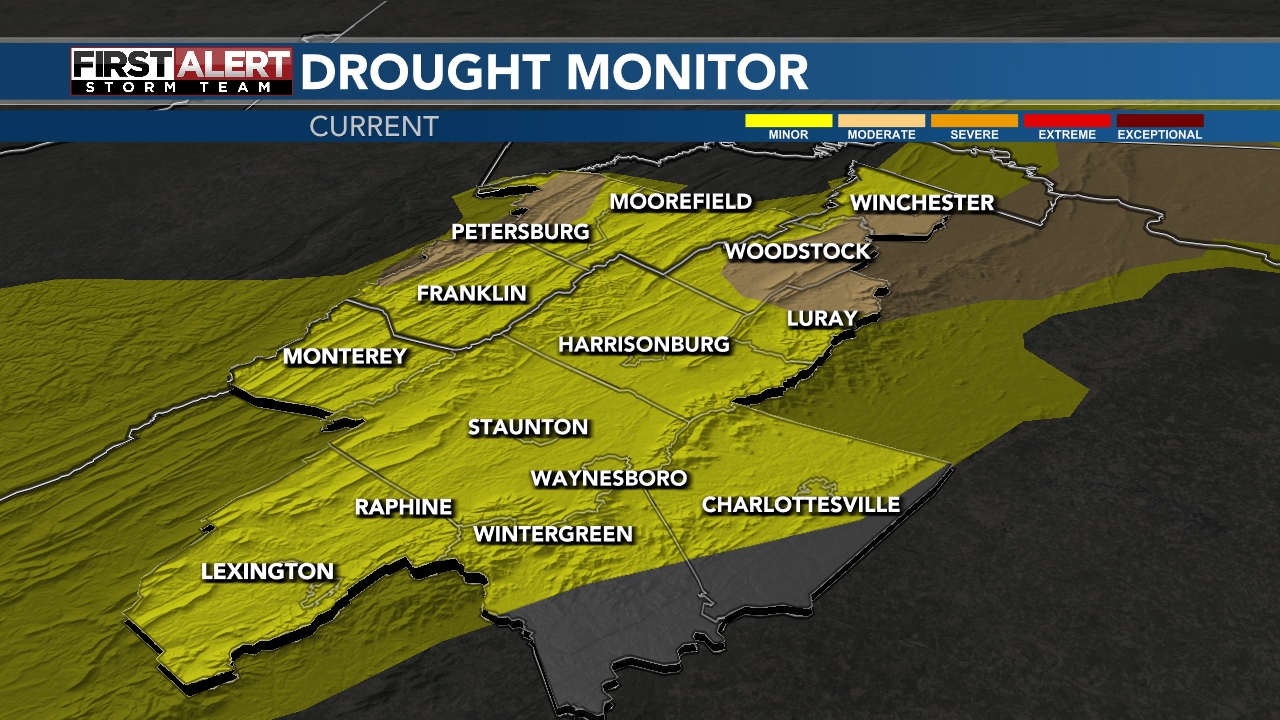 Nearly every month this year has come in with below average rainfall. Typically we like to see a wet spring. This can set us up for the summer months when thunderstorms are much more hit and miss and not as widespread.

This is a look at a few of our reliable (consistent weather data) weather stations across the area. Any surplus has been very minimal.

River levels are also very low across the region. While not every river gauge has a historic low recorded, here’s a look at a few with current stages and the recorded low stage. What’s going to be concerning is if this pattern continues into the fall. This can greatly impact agriculture and water supply. The other thing to consider is fall wildfire season which starts in mid-October.

One of the worst droughts in Virginia history. All three of our longest running weather stations recorded the lowest rainfall for the year. In fact rainfall that year was so low, it was less than half of the yearly average. All three stations have more than 100 years of records.

Not only was there a significant lack of rain but the heat of 1930 was like no other. The Dale Enterprise weather station recorded 11 days with temperatures at or above 100°. The all time record heat wave was July 18-August 10, 1930 with a staggering 26 days at or above 90 degrees.

Wells dried up as well as the rivers. Agriculture took a major hit. Several people also died from the extreme heat. Heat is still the number one weather killer, more than floods, hurricanes or tornadoes. There were also a number of wildfires that broke out.

It’s possible the drought of 1830-1840 was as severe if not worse than the 1930 drought yet little information is available.

The 1999 drought started to set up back in the summer of 1998 as rainfall was below average for the second half of 1998. Because of a persistent ridge of high pressure over the area during the summer of 1999, this steered storm systems to our north. The effect to agriculture was devastating and the Virginia Department of Forestry reported a record fire season from January to July, 1999.

The Palmer Drought severity index: This tracks moisture conditions in either droughts or surplus. We have several links to soil conditions on the weather section of our website and these are found under the tab: Weather Info and Resources

You’ll want to scroll to river levels and precipitation. There are a number of links and resources to precipitation, anomalies and soil moisture.

2 dead, 1 injured in Albemarle County crash near I-64

High school senior signs letter of intent, but not for sports or academics