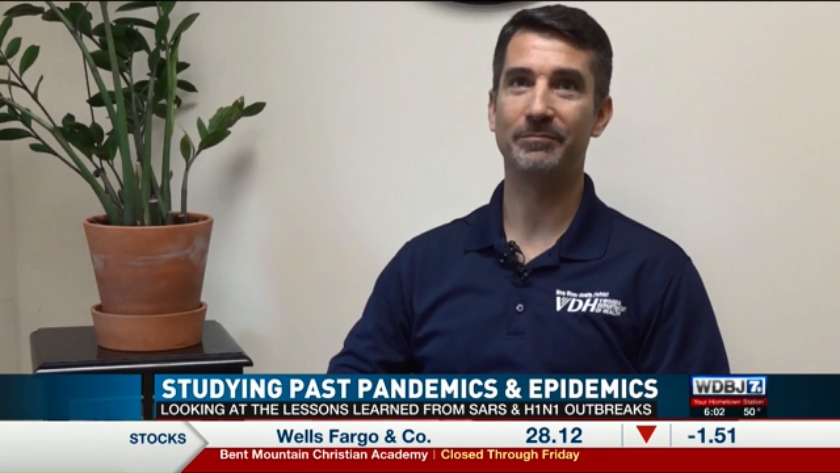 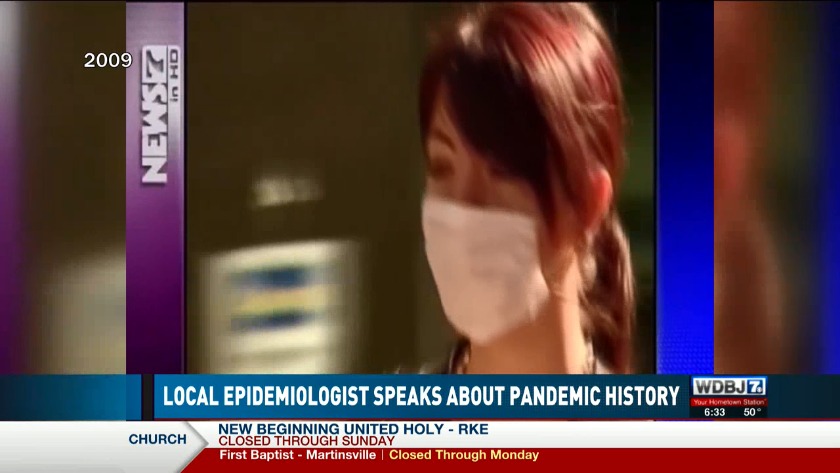 CHRISTIANSBURG, Va. (WDBJ7) — The world is experiencing a pandemic for the first time in 11 years, but with every outbreak, medical professionals learn more about our bodies, medicine, vaccines and public intervention to prepare for the next one.

"The world has seen things similar to this," Jason Deese, with the Virginia Department of Health, said.

He calls himself a disease detective and has studied diseases for decades.

"Find out the origin of people's illness. That's my j-o-b," he laughed. "I was actually in Asia for the SARS epidemic."

He said out of every outbreak, health officials learn something new. For SARS, it was how the health care system handles epidemics.

During the H1N1 , or swine flu, epidemic in 2009, public intervention was key.

"And that kind of stemmed that outbreak and made it looked like a bad season of the flu," he said.

Video pulled from the WDBJ7 archives shows an eerie similarity between life in 2009 and 2020. There were people walking around with masks and signs reminding people to cover their coughs and wash their hands.

"For reasons we don't fully understand, this virus loves to go inside the lung, swells the lung, and your x-ray will look completely white," a doctor said in 2009 describing what swine flu does to the body.

Today's coronavirus pandemic has affected over 200,000 people, but that number is growing every day. According to Deese, the severity of these cases is what has health officials concerned.

"Morbidity means how bad is the illness for your average person," he said. "And it does appear to be pretty disruptive and keep people out of work or out of school longer than your typical flu."

And because H1N1 was a variation of the flu, it was quickly treated and vaccinated.

"Because we had interventions available months after the virus was discovered, they were able to make vaccine for example," Deese said.

However, despite their similar symptoms, coronavirus and the flu are not the same, so health officials are working with a completely unknown disease, which is why nations are going to extremes to prevent its spread.

"If all of these things we put in place actually work, then it'll be a lower percentage [of cases]. If it doesn't completely work, at least we're slowing down the epidemic," Deese said. "If our efforts are successful, what we know we will hear is, 'See, this was nothing.' 'People got all spun up over nothing.' And I'll be completely satisfied hearing that, knowing that the measures that we took prevented widespread mortality and widespread morbidity."

Deese also offered this bit of hope. He said the same flu that's going around this season is the same H1N1 flu from 2009, but because health officials learned a lot about treatment and vaccines that time around, this season's flu is easily prevented and treated.

He said it's hard to tell what the long and short term effects of COVID-19 will be, but he's optimistic. He's seen how these situations bring out the best in people and hopes this one continues to do the same.

The New River Health District urges anyone with cold-like symptoms to first call its new COVID-19 hotline: 540-267-8240. The Medical Reserve Corps is also looking for volunteers for emergency response teams.

UVA Health opens up hotline for those without primary care physician

Future of telemedicine: How COVID-19 is changing how we see the doctor

UVA Health opens up hotline for those without primary care physician

Future of telemedicine: How COVID-19 is changing how we see the doctor