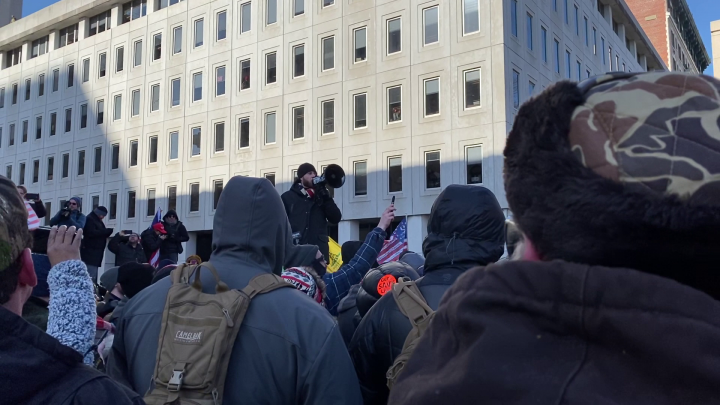 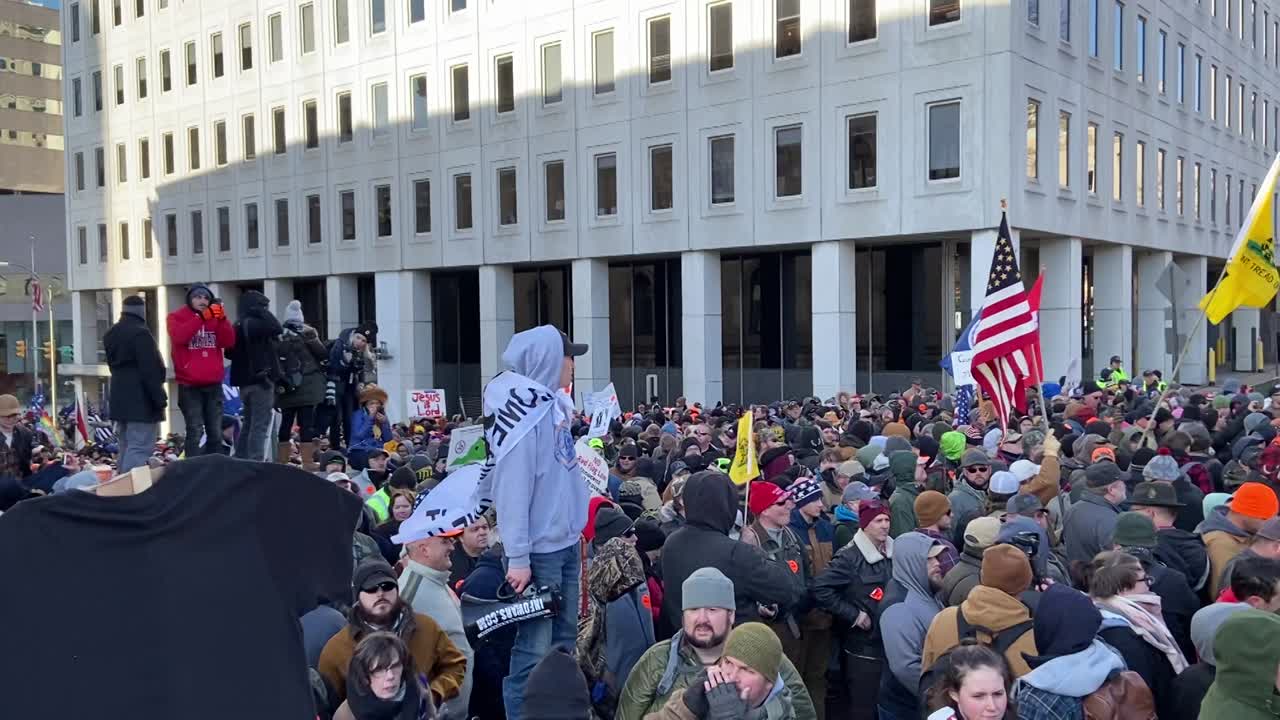 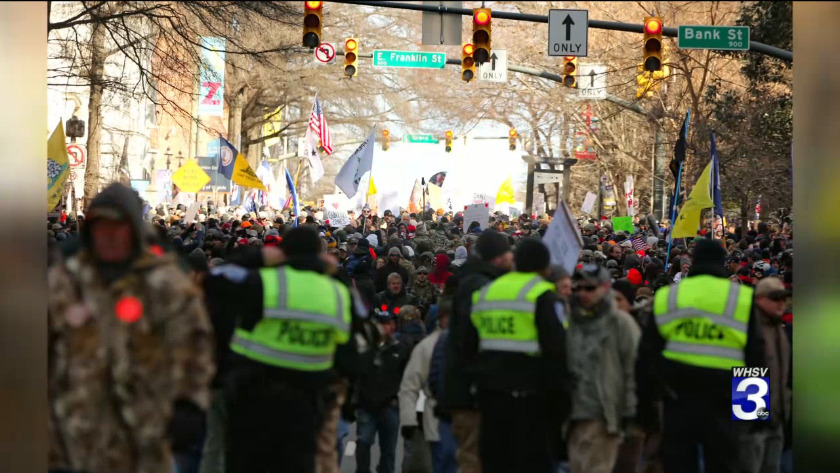 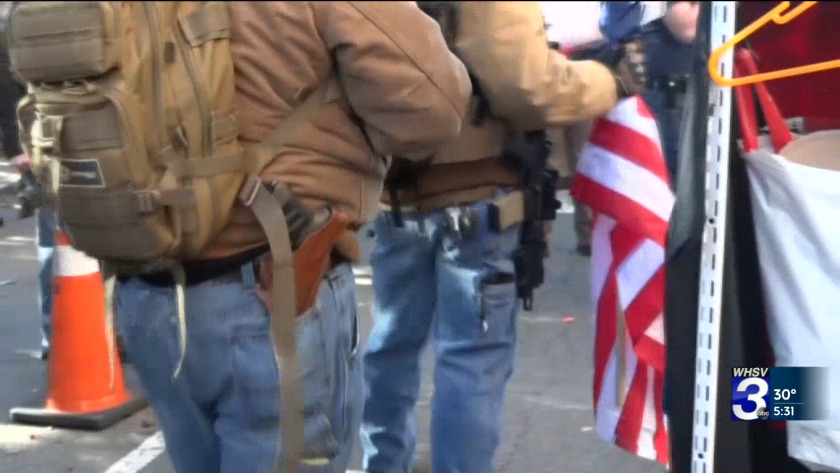 Pro-gun rally draws people from outside of the Commonwealth 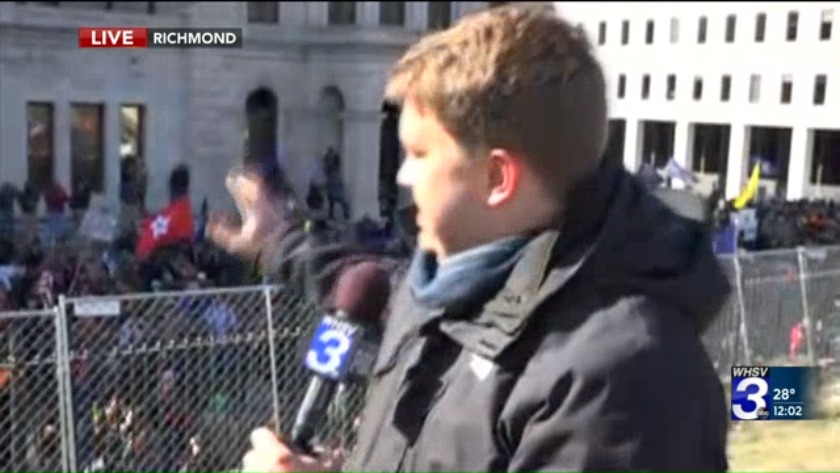 RICHMOND, Va. (WHSV) — Thousands of gun-rights activists from around the country rallied peacefully at the Virginia Capitol on Monday, protestingplans by the state's Democratic leadership to pass gun-control legislation that have become a key flashpoint in the national debate over gun violence.

The size of the rally and the expected participation of white supremacists and fringe militia groups raised fears that the state could see a repeat of the violence that exploded in 2017 in Charlottesville.

But the rally concluded uneventfully around noon, and the mood was largely festive. Attendees spilled into the streets, chanting “USA” and waving signs denouncing Democratic Gov. Ralph Northam.

“The government doesn’t run us, we run the government,” said Kem Regik, a 20-year-old private security officer from northern Virginia who brought a white flag with a picture of a rifle captioned, “Come and take it.”

Others carried signs with messages like "I want gay married couples to be able to protect their marijuana plants with guns."

The Virginia State Police, the Virginia Capitol Police and the Richmond Police had a strong presence. Police limited access to Capitol Square to only one entrance and warned rally-goers they may have to wait hours to get past security screening.

The pushback against proposed new gun restrictions began immediately after Democrats won majorities in both the state Senate and House of Delegates in November. Much of the opposition has focused on a proposed assault weapons ban. While the Senate version of that bill was killed in committee, a House of Delegates version remains.

The rally coincides with the Martin Luther King Jr. holiday, which is typically a chance for everyday citizens to use a day off work to lobby their legislators. However, the threat of violence announced by Gov. Northam largely kept other groups away from the Capitol, including gun control groups that hold an annual vigil for victims of gun violence.

Photos from Richmond, including those from WHSV viewers, Capital News Service, our affiliates, and others, can be found in a slideshow below. You can share your photos and videos with us by clicking here. Uploading photo or video through that link gives us copyright clearance to use your content on-air and online to share with the rest of our viewers. 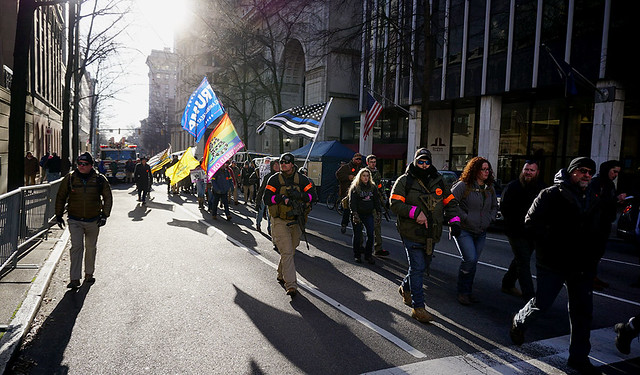 Someone set off some smoke earlier but that was the only shenanigan we saw. Surprising amount of people with faces completely covered, carrying firearms. Wearing a mask in public to conceal identity is illegal in VA pic.twitter.com/3PiGq3Y0zP

I’m pretty sure moving guillotine off street is not in the state police training manual. Cops getting this thing off the road to open it back up to traffic. pic.twitter.com/PYf0iueOCb

He said, to the crowds outside of the Capitol: “Where were you Nov. 4” (elections). He said he hopes today’s “fervor burns for the next state election”

Virginia's Grayson County Sheriff's Office was among the tens of thousands of folks at today's gun rights rally during Lobby Day at Capitol Square in Richmond. pic.twitter.com/U6k2hsalgA

It’s slow going getting out of Capitol Square with so many people pic.twitter.com/HRiQdctSVs

Some of the streets around the Capitol are so full you can barely walk. This is part of the street right in front of the building. Lots of signs for Trump and against Northam pic.twitter.com/jzs6bDsMWP

There have been a variety of speakers today, including some state senators and sheriffs. They’ve asked people to make sure they vote in November, and to ask their commonwealth attorneys and sheriffs to protect their rights.

#happeningnow The speeches have started on the Capitol steps and the area in front of the building is full of people. The streets are still full as well. pic.twitter.com/SyIEouT0db

Lobby Day in Richmond, VA. This group is from @AR15COM. pic.twitter.com/96gVs35H3G

The VA Citizens Defense League is passing out signs showing all the localities that have passed Second Amendment sanctuaries. pic.twitter.com/3WsOaZihLZ

Just spoke with some people who drove from Ohio for the rally today. They said they knew people coming from Colorado and Washington as well.

The area inside the Capitol is starting to fill up, but it’s fairly quiet inside. It seems a lot of people are staying outside the boundary in the streets. pic.twitter.com/7V9ukWnf7K

So far we’ve seen lots of people with signs about not taking away their rights, signs supporting the president. People are also selling shirts and hats. Also lots of the neon organs “Guns save lives” stickers

Zach, Travis and Tim (L to R) are here from #rva. They said everybody here seems to be friendly so far and said they hadn’t seen any confederate flags. They said they’re here because gun rights are everyone’s rights and a civil right. pic.twitter.com/wzkKOo1h93

@WHSV_Hannah and I just made it past security into Capital Square. Security was very thorough checked bags, jackets, and wanded down. Stay with @WHSVnews for continuing coverage of Lobby Day. pic.twitter.com/SRHRdvtPjK

Raymond said he is with the Mechanicsville tea party that is starting back up. He said “ they can’t overturn our laws in six months.” I asked specifically what the do not comply stood for and he said “We won’t give up our guns” #LobbyDay2020 #Virginia2A #2ARally pic.twitter.com/tUw8mpY9HL

@WHSV_John and I are in Richmond today and the area is already full of people ahead of Lobby Day. You can follow along here, on facebook, and on air as we follow what happens today. pic.twitter.com/CW51SBUpG5