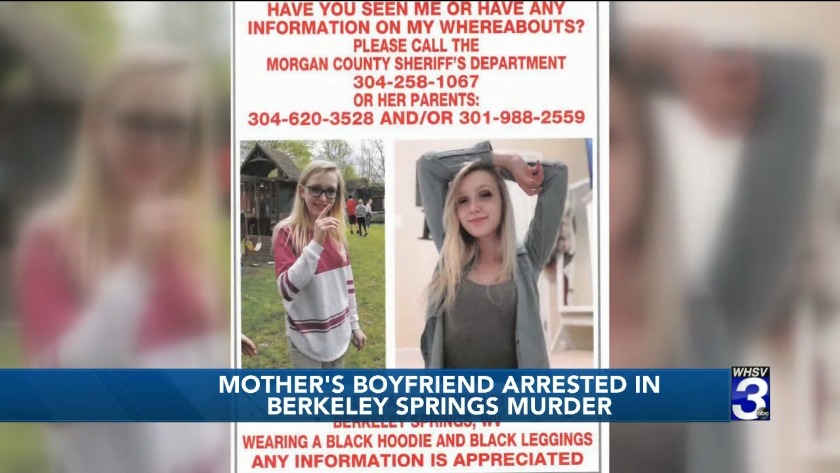 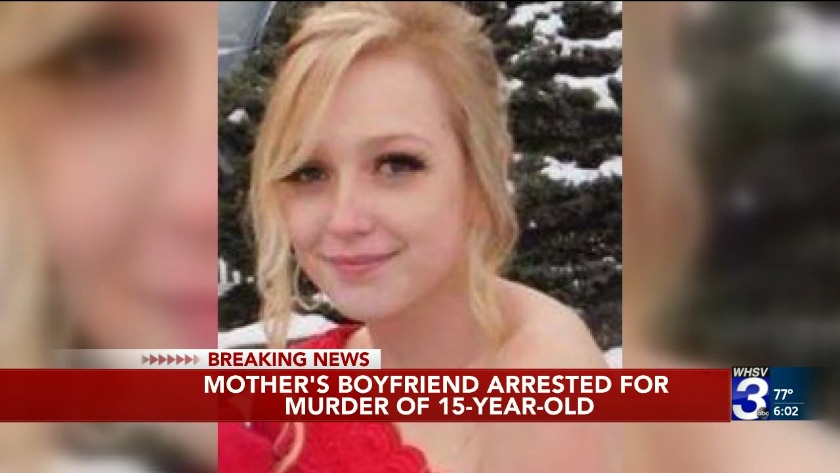 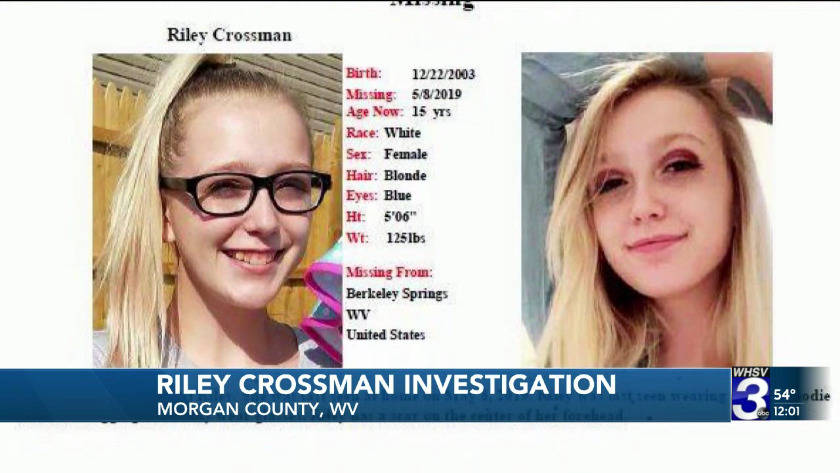 A criminal complaint for Andy McCauley, the man accused of murdering 15-year-old Riley Crossman, reveals chilling new details about the case of her disappearance.

On Thursday, the Morgan County Sheriff's Department announced that the boyfriend of Crossman's mother had been arrested for her murder shortly after her remains were found on a mountainside.

She had been missing for just over a week, and the day before her body was found, hundreds of volunteers had joined a massive search effort throughout Morgan County to try and bring her home.

On Friday, the West Virginia Medical Examiner was scheduled to perform an autopsy on the body found to confirm its identity as Riley, determine cause of death, and figure out how long she had been dead.

According to West Virginia State Police statements in the complaint, Riley was last seen at her home on Greenway Drive in Berkeley Springs on May 7, around 7 p.m., by her grandmother. Crossman's mother told state police that she saw Riley's bedroom light on, with the door closed, and McCauley was downstairs asleep around 10:30 p.m. that same night.

The next morning, May 8, Crossman's mother woke up and checked Riley's room to find that she wasn't there. However, she told police she assumed her daughter had walked to school — until she got a text from the school letting her know that Riley was absent. At that point, she called police to report her missing.

As far as where McCauley was on that day, state police say he changed his story multiple times. In Morgan County Sheriff Bohrer's announcement of his arrest on May 16, he told reporters that McCauley had been "a suspect since day one."

The criminal complaint reveals that McCauley first told police he never left his construction work site in Hedgesville on May 8.

But later, the man who has faced previous drug charges told police he had, in fact, left the work site, but just for a short time to drive back to his home on Greenway Drive to get cocaine for himself and a co-worker.

Police say he used a work vehicle, identified as a green Dodge truck, to go back to the house. Witnesses at the work site allegedly told state police that McCauley already had cocaine in his possession before leaving.

During the course of the investigation, troopers said they searched the truck in question, which was used only by McCauley.

According to the criminal complaint, McCauley lied to police about the routes he used heading back to the job site too. In his original statement, McCauley told troopers he left the construction site for only around 90 minutes to 2 hours. But troopers say video surveillance shows McCauley leaving the work site at 9 a.m. and not returning until almost 2 p.m.

In the week after, federal, state, and local agencies partnered to search for Riley, whose story was broadcast across the country, with a Dateline exclusive on NBC.

While the medical examiner's autopsy will reveal the exact time of death, Sheriff Bohrer indicated in a press conference on Thursday that she had been killed some time before, since her remains were already decomposed when they were discovered on Thursday morning.

Officers with the West Virginia Natural Resources Police were searching for Riley, when they found remains on an embankment off of a rural mountain road section in the 5500 block of Tuscarora Pike, near the top of a mountain in Berkeley Springs.

Troopers determined the body was almost certainly that of Crossman.

According to the criminal complaint, the body had drywall mud on the right shoulder and right foot that matched the drywall mud found in McCauley's truck.

Police also said the location where the body was found was in an area consistent with a route of travel McCauley could have taken from Berkeley Springs to his construction site in Hedgesville.

McCauley is charged with murder. Counselors have been provided at Berkeley Springs High School, where Crossman attended, to help students in the days to come.

If you would like to support Riley's family, a GoFundMe was established here, initially to support them during the search.

The Morgan County Sheriff's Department has arrested 15-year-old Riley Crossman's mother's boyfriend as a suspect in her death.

After over a week searching for the Berkeley Springs teenager, the department said in a Thursday evening press release that a body matching her description was found in the 5500 block of Tuscarora Pike in Berkeley County on the morning of May 16.

In a press release, the department says the body was on an embankment off of a rural mountain road section of Tuscarora Pike, near the top of a mountain. Due to the terrain, the West Virginia State Police Crime Scene Team and the Frederick County Sheriff's Office, from Virginia, responded to help.

While the identity of the decomposed remains could not be immediately confirmed, Sheriff Bohrer said they were "very confident" the remains were hers.

An autopsy conducted at the West Virginia Medical Examiner's Office on Friday morning will confirm more details, as far as cause of death and how long her body had been there, as well as positive identification of the body.

Crossman was reported missing in the early morning hours of May 8 when her mother learned she had not been to school. In the week afterward, federal, state, and local agencies partnered to search for her. But throughout that search, police were carrying out a second search for any suspicious persons.

On Thursday, they arrested 41-year-old Andy J. McCauley, Jr. for the girl's death, who Bohrer said was "a suspect since day one."

When asked by reporters at the press conference about McCauley's relation to Crossman, he confirmed that he was her mother's boyfriend.

McCauley was under surveillance by law enforcement at his job site in Berkeley County until he was asked to come into a West Virginia State Police office, which he agreed to do. There, he was arrested, and, according to Bohrer, was likely being processed during the press conference.

He will be charged with murder – exactly which degree of murder will be up to the prosecuting attorney.

Bohrer said they had no reason to suspect the involvement of any other suspects.

On Wednesday, May 15, over 300 volunteers turned out from around the region to help law enforcement search for any sign of Riley.

The Morgan County Sheriff's Department says this isn't the conclusion they hoped for, but they are glad the family has some closure, and they ask for prayers for all her family and friends.

A prayer vigil will be held at the Berkeley Springs State Park at 7 p.m. on Thursday evening.

Counselors will be at Berkeley Springs High School, where Crossman attended, to help students in the days to come.

The investigation remains very much ongoing.

Over a week after Riley Crossman's disappearance, investigators continue to search, but there's been no sign of her.

Crossman, a 15-year-old girl, was last seen at her home in Berkeley Springs, West Virginia, on May 8, wearing a black hoodie and black leggings.

The Morgan County Sheriff's Department announced that she was missing the next day.

Within days, their staff logged hundreds of man hours looking for Riley, and got assistance from the FBI, National Center for Missing and Exploited Children, Internet Crimes Against Children Unit, West Virginia State Police, and multiple local agencies from around the state, but she could not be found.

On Wednesday, May 15, they carried out a large coordinated search with the help of volunteers from all over the region.

Washington County Fire and Rescue, the Red Cross, Union Chapel United Methodist Church, and the local Moose Lodge teamed up with individual volunteers to donate food and drink for the hundreds of searchers.

Those helping out searched 16 areas extensively, with the help of K9s, and the Hampshire County Sheriff's Department conducted drone searches overhead.

Plus, the Berkeley Springs High School Fishing Club provided boats to search the Potomac River in the area.

But, even with all of those resources dedicated to the search, nothing considered evidence in the case was found.

As of May 16, the department is not planning any additional community searches, but they will use their Facebook page to announce any planned new ones.

Croswell is described as a white girl with blonde hair and blue eyes, standing 5-feet, 6-inches tall and weighing 125 pounds. She may wear glasses and has a scar in the center of her forehead.

If you see her or know of her whereabouts, you're asked to contact the Morgan County Sheriff's Department at 304-258-1067.

If you would like to support her family during the search, a GoFundMe has been established here. Funds from it will be used for search operation expenses, as well as living expenses while the family dedicates all of their time to bringing Riley home.