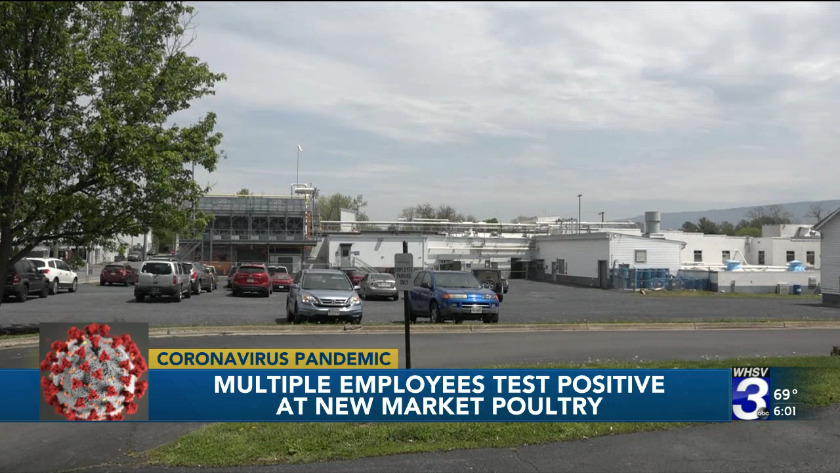 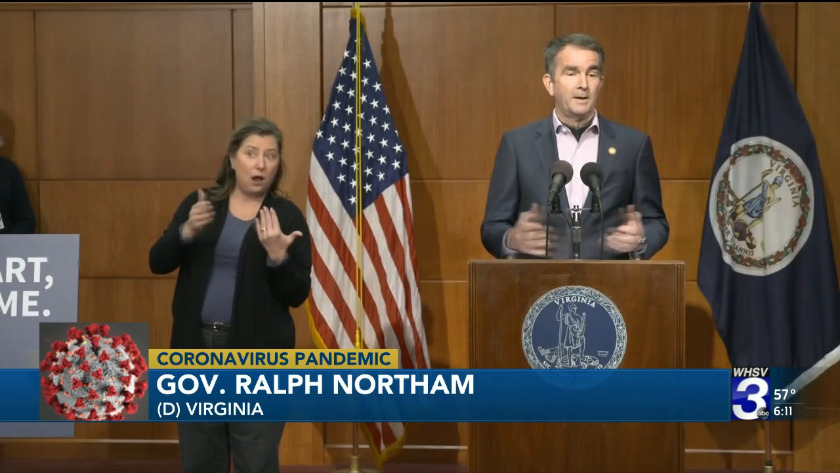 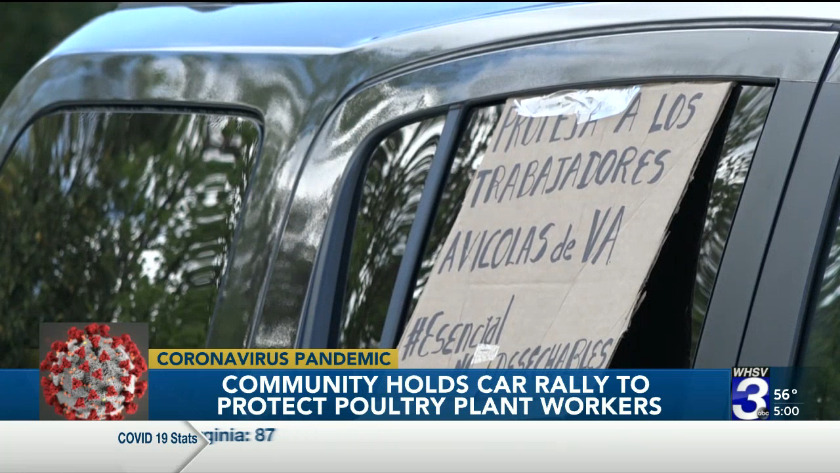 HARRISONBURG, Va. (WHSV) — On Wednesday, ahead of Governor Ralph Northam's tri-weekly COVID-19 briefing, a coalition of advocates sent a letter to the governor and state agencies calling on them to enact enforceable COVID-19-specific measures for poultry plants and farms across Virginia.

A car at an April 27 rally on the Eastern Shore in support of poultry processing plant workers.

The coalition, including the Legal Aid Justice Center, Virginia Organizing, and Community Solidarity for Poultry Workers, previously sent letters on March 30 and April 23 calling for protections for farm workers and for poultry workers.

While Gov. Northam has spent considerable time in his briefings discussing the situation at Virginia meat processing plants, especially poultry plants on the Eastern Shore and in the Shenandoah Valley, the coalition says no specific action has been taken by the governor and his staff.

The governor has said that teams were deployed from the CDC to assess the situation at many facilities and ensure that they're following updated federal guidance for meat processing facilities released last month.

And the Virginia Poultry Federation has said they've taken " significant and unprecedented steps" to protect workers, including increased sanitation and cleaning, increased frequency of hand washing, required face masks or shields for employees, social distancing in common areas and, if possible on production lines, plexiglass dividers between workers on production lines, and heightened employee screenings.

But the coalition of advocacy groups says they have not "seen anything issued beyond recommendations, many of which seem untenable or shift the burden to the workers, and none of which can be enforced if the employer does not follow them."

So, as Virginia poultry workers continue going to work, the coalition of advocates is asking Gov. Northam and the State Board of Health to go further and put into place new, enforceable guidelines.

They highlight that the governor's April 27 announcement of coordination between Virginia, Maryland, and Delaware to assist Delmarva peninsula poultry plants doesn't address the situation in the Shenandoah Valley, where a Cargill employee in Dayton has died and multiple employees at New Market Poultry have tested positive.

The situation at other facilities remains unknown because Virginia code protects them from having to publicly release any employee health information unless they choose to do so.

The coalition of advocates is calling for CDC teams to be deployed to the Shenandoah Valley to investigate the plants in and around Harrisonburg, like they were deployed on the Eastern Shore.

Testing is currently available at 10 sites on Virginia’s portion of the Eastern Shore, said Larry Hill, public information officer for VDH’s Eastern Region, who also noted that the CDC has visited the Accomack plants and is providing them guidance. But the Shenandoah Valley has not seen a similar response.

"More than ten thousand workers work in the Valley’s plants are similarly suffering, worrying, and, in some instances, dying due to COVID-19," the advocates issuing the letter to Northam said in a statement.

Overall, they're asking for the State Board of Health and Gov. Northam to use their authority to have the Virginia Occupational Safety and Health produce enforceable regulations on worker safety, including social distancing, sanitizing, disinfection, PPE requirements, mandatory notifications to the Virginia Department of Health, whistleblower protections, mandatory shutdowns for sanitizing following a positive test, and mandatory testing for COVID-19.

They're also asking the General Assembly to pass new legislation expanding the federal Families First Coronavirus Response Act to include paid leave for employers with more than 500 employees, which would include almost all poultry plants.

The Virginia Poultry Federation says they appreciate the efforts of all local governments to comply with Gov. Northam's prohibition on social gatherings and says, as a critical infrastructure workforce under President Trump's recent executive order on meat processing facilities, they are all following all CDC and OSHA guidelines.