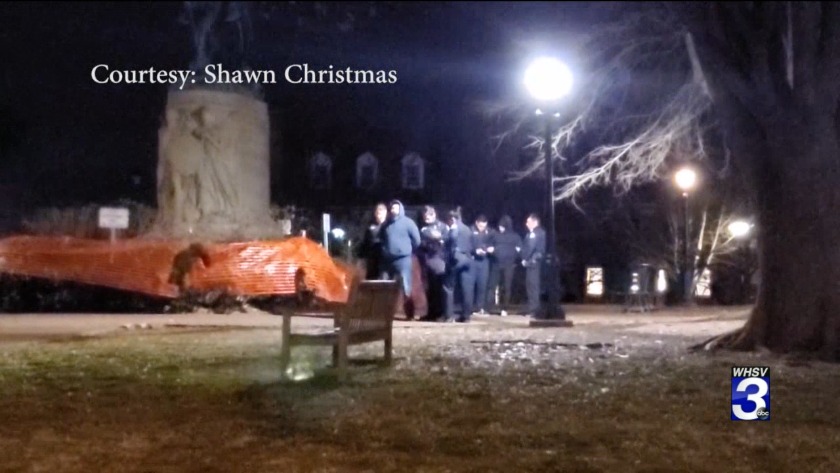 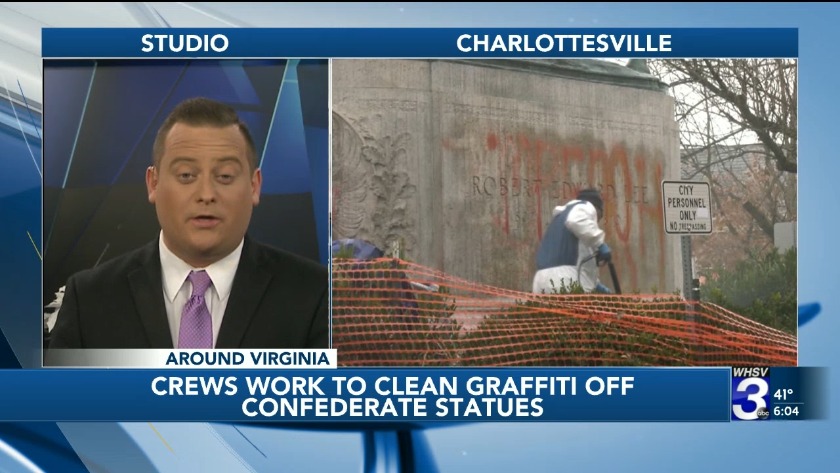 CHARLOTTESVILLE, Va. (WVIR) — A group of artists and activists have erected a new mural in support of new legislation that would clear the way for Virginia localities to remove or replace their Confederate monuments. The piece was debuted Saturday morning at the Free Speech Wall on Charlottesville’s Downtown Mall.

A panel of the Monumental Justice mural on Charlottesville's Downtown Mall, depicting possible alternative statues. The artists list Queen Charlotte, York the explorer, and a monument to Vinegar Hill as options. (Source: WVIR)

The mural was drawn in chalk over the span of three hours and spans the length of the Free Speech Wall. It was created by local artists in collaboration with Monumental Justice, a group fighting for Charlottesville and other cities to be able to remove their Confederate statues if they choose.

The piece, on one side, depicts a tiki torch being broken in half, a reference to the events of August 12, 2017 and the “Unite The Right” rally that sparked violence in downtown Charlottesville that ended with the murder of Heather Heyer. One panel of the mural urges viewers to get involved by writing their elected officials to support legislation to remove the statues.

On the other side, the artists depict possible alternative statues. The artists suggest a statue of Queen Charlotte, the city’s namesake, York, Lewis and Clark’s enslaved traveling companion, and a monument to Vinegar Hill, a historically black neighborhood that was razed for redevelopment in the 1970s.

A 2019 court decision ruled that the statues are war memorials, and are protected by state code. Two bills in the General Assembly, H.B. 1625, sponsored by Del. Sally Hudson (D-Charlottesville), and S.B. 620, sponsored by Sen. Creigh Deeds (D-Bath County), would amend the code to allow localities the final say on what happens to those monuments.

“The bills are in committee right now and they’ll be considered in the next one to two weeks," Martinez explained. "So it’s really important that we got this mural up today because we want people to know about it. A lot of times it’s really hard to follow what’s happening in local government but this makes it really easy ... it’s hard to ignore.”

The mural is on display now on the Downtown Mall.