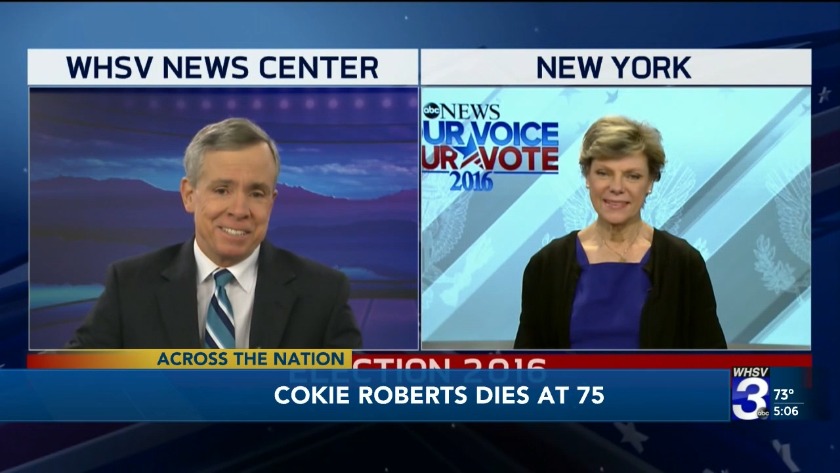 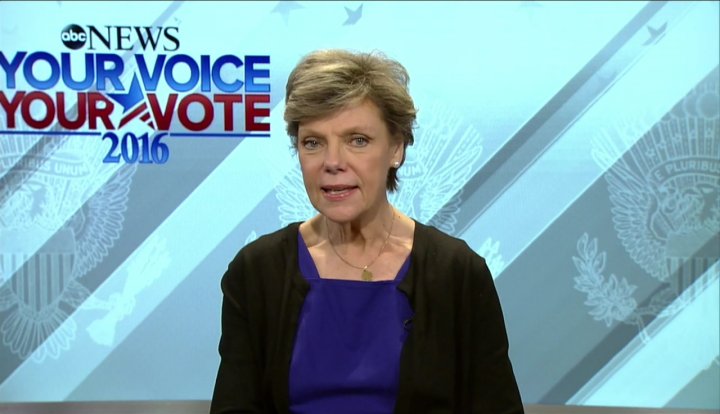 Roberts won countless awards, including three Emmys, throughout her decades-long career. She has been inducted into the Broadcasting and Cable Hall of Fame and was cited by the American Women in Radio and Television as one of the 50 greatest women in the history of broadcasting. She was named a "Living Legend" by the Library of Congress in 2008.

"We will miss Cokie beyond measure, both for her contributions and for her love and kindness," her family said in a statement.

Her death was due to complications from breast cancer.

Roberts, born Mary Martha Corinne Morrison Claiborne Boggs, said she got the name "Cokie" from her older brother, who couldn't pronounce Corinne and dubbed her Cokie instead. The name stuck with her ever since.

"Cokie Roberts will be dearly missed," said James Goldston, president of ABC News. "Cokie's kindness, generosity, sharp intellect and thoughtful take on the big issues of the day made ABC a better place and all of us better journalists."

Roberts was "a true pioneer for women in journalism," Goldston said, "well-regarded for her insightful analysis of politics and policy in Washington, D.C., countless newsmaking interviews, and, notably, her unwavering support for generations of young women — and men — who would follow in her footsteps."

She is survived by her husband, fellow journalist Steven Roberts, her children, Lee and Rebecca and her six grandchildren.

Roberts graduated from Wellesley College in 1964 with a degree in political science and began her career in radio as a foreign correspondent for CBS in the 1970s and started covering Capitol Hill for National Public Radio in 1978, reporting on the Panama Canal Treaty.

She was assigned to Capitol Hill full-time in the early 1980s, serving as the network’s congressional correspondent for more than a decade.

Roberts co-anchored ABC’s "This Week" with Sam Donaldson from 1996 to 2002. She also served as political commentator, chief congressional analyst and a commentator for "This Week" during her three decades at ABC.

Additionally, she wrote eight books, largely focusing on the role of women in American history, many of which were New York Times bestsellers.

She had recently acknowledged a struggle with her health.

"Over the summer, I have had some health issues which required treatment that caused weight loss. I am doing fine," she said in a statement after the "This Week" appearance. "I very much appreciate the kind comments I have received and expect to be, as I have been, working away in the days and months to come, covering what promises to be a fascinating election. I am grateful to everyone who has been in touch and sent their well wishes. Thanks for caring."

Roberts was diagnosed with breast cancer in 2002 and was successfully treated. When she was diagnosed, she spoke about her longtime work urging women to get regular mammograms.

"Fortunately, in the course of my efforts to inform others about the disease, I learned about the benefits of early detection," she said in a statement at the time, The Washington Post reported. "Now I am the beneficiary of that information."

She told the Post that her cancer diagnosis didn’t give her a newfound perspective on life, because she already had one.

During a Facebook Q&A in 2013, when asked what was the best part of her career, she said that her family has been "by far the best part" of her life.

"I’ve been blessed in my life with been a long and happy marriage that produced two wonderful children who have in turn each produced three spectacular grandchildren and that is by far the best part. In terms of career, I’ve been lucky to have many interesting jobs and loved most of them. The ability to develop expertise and then be able to use that knowledge in broadcasting is gratifying. And I find writing books particularly satisfying," she wrote in her response to the Facebook question.

Roberts came from a political family: she was the daughter of (Thomas) Hale Boggs, the former Democratic House majority leader and representative from New Orleans. Her father was also a member of the Warren commission that investigated the assassination of President John F. Kennedy.

Hale Boggs died in a plane crash in Alaska in 1972, and his wife – Roberts’ mother – Lindy Boggs was elected to fill her late husband’s congressional seat.

Lindy Boggs was later appointed to be the U.S. ambassador to the Holy See by then-President Bill Clinton in 1997.

Roberts’ siblings also took a liking to politics. Her older brother, Thomas Boggs Jr., was a lobbyist and her sister Barbara Boggs Sigmund was the former mayor of Princeton, New Jersey. Her younger brother, William, died as an infant, and her other two siblings have died as well.

In an interview earlier this year, Roberts noted that she was "the only person in my original nuclear family who didn’t run for Congress. Now, they didn’t win all of them – the only one that never lost an election was my mother."

But she filled that void with her foray into journalism.

"I have always felt semi-guilty about it. But I’ve sort of assuaged my guilt by writing about it and feeling like I’m educating people about the government and how to be good voters and good citizens," she told The Washington Post.

Roberts married journalist Steve Roberts in 1966, after meeting at a political event in Ohio four years earlier when they were both in college.

Steven Roberts worked as a reporter at The New York Times for many years, and in a 2017 interview, Cokie Roberts credited her husband as being "my mentor when I started off as a journalist."

"I had always been a good writer, and so I started reporting and writing. He was a big help to me, and we did a lot together," she said for an oral history project developed by the House of Representatives.

Steve Roberts said in a New York Times interview in 2017 that he was "bowled over" by his wife’s intellect.

"Marrying the right person is the single most important decision you’ll ever make in your life. Everything else is secondary. From the very beginning, I knew what an extraordinary person Cokie was," Steve Roberts said in the Times article, which was published to celebrate their then-50 year union in 2017.

The pair got married under an apple tree in the backyard of her family’s home in Bethesda Maryland, and then-President Lyndon B. Johnson and first lady Lady Bird were among the 1,500 guests in attendance. The home stayed in the family, and was Cokie and Steve Roberts’ home at the time of her passing.

Full statement from the family of Cokie Roberts:

Her loving family announces the passing of journalist and author Cokie Roberts, due to complications from breast cancer, on September 17.

Cokie’s career as a journalist at National Public Radio and ABC News took her to the heights of her profession, and her success as an author on history and family put her on the best seller list.

But her values put family and relationships above all else.

She is survived by her husband of 53 years, journalist, author and professor Steven V. Roberts, her children Lee Roberts and Rebecca Roberts, her grandchildren Regan, Hale and Cecilia Roberts and Claiborne, Jack and Roland Hartman, along with numerous nieces, nephews, and cousins.

She is also survived by friendships and by causes that she put her time, resources and energy into that are too numerous to count.

We would like to thank the staff at the National Institutes of Health for their dedication, expertise, work and incredible care for Cokie during her illness.

We will miss Cokie beyond measure, both for her contributions and for her love and kindness.

We are hopeful that Cokie now goes to join her parents, former Members of Congress Hale and Lindy Boggs, her siblings Barbara, Tom and William, who predecease her, and her God.

I'm writing with very sad news. Our dear friend and colleague Cokie Roberts passed away this morning in Washington, surrounded by her family and closest friends.

Cokie had a storied career over 40 years in television, public radio and publishing. She started at ABC as a contributor for This Week with David Brinkley, appearing frequently on the roundtable. She was ABC’s chief congressional analyst, anchored This Week with Sam Donaldson from 1996 to 2002 and was known as one of the smartest political commentators on television and radio for decades. A true pioneer for women in journalism, Cokie was well-regarded for her insightful analysis of politics and policy in Washington, DC., countless newsmaking interviews, and, notably, her unwavering support for the generations of young women – and men – who would follow her in her footsteps.

In the 1970s Cokie started in radio as a foreign correspondent for CBS, before moving to NPR to cover Capitol Hill in 1978. She would go on to become the congressional correspondent for NPR, where she would eventually split her time with ABC News. Cokie is perhaps the only reporter to have filed for Morning Edition, All Things Considered, World News Tonight and Nightline all in a single day.

A terrifically talented writer and historian, Cokie published six books, many of them best-sellers and most about women in American history, whose stories often had been overlooked. She won every major award in journalism and was recognized with over 30 honorary degrees. Cokie was named one of the 50 greatest women in the history of broadcasting by the American Women in Radio and Television, and the Library of Congress declared her a "Living Legend" in 2008, making her one of the very few Americans ever honored.

Her beloved husband Steve was at her side through all of it. They were married for over 50 years and wrote a widely popular syndicated newspaper column and two books together. Cokie and Steve were married in the garden of her parents’ Bethesda home, where Cokie grew up and they would later raise their family. They had two children, Lee and Rebecca, and six grandchildren, whom she cherished.

Please join me in sending your thoughts and prayers to Cokie's family and loved ones. Her family passed along the message below. We will share details about the service when they're available.

She will be dearly missed. Cokie’s kindness, generosity, sharp intellect and thoughtful take on the big issues of the day made ABC a better place and all of us better journalists. Please take a moment today to remember an exceptional reporter and remarkable friend.

RIP Cokie Roberts, mentor, friend and one of my favorite people in the world.

Cokie attended 22 national political conventions — that may be a record — I had the privilege of interviewing her on the floor of her last convention. pic.twitter.com/C2ulOSya7f

A mentor, a friend, a legend. We will miss you dear Cokie https://t.co/MXBzDbM1qD