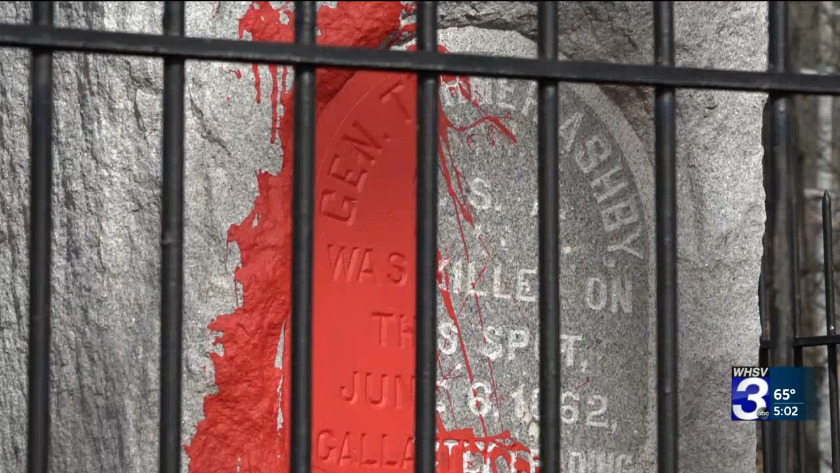 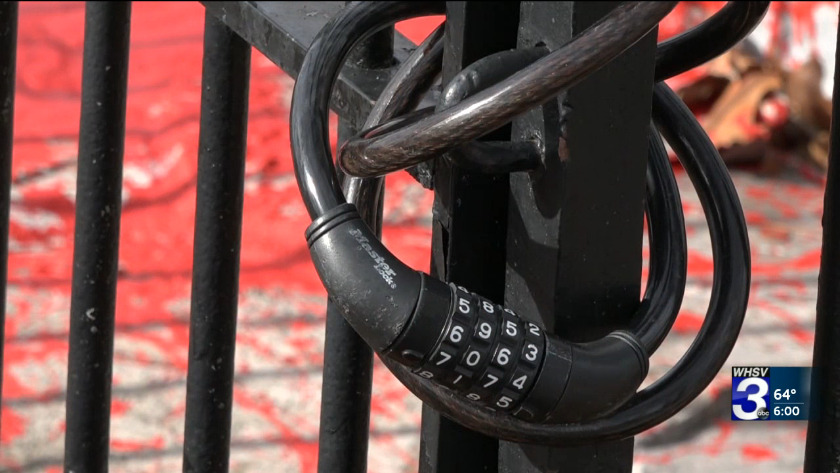 HARRISONBURG, Va. (WHSV) — A Harrisonburg monument marking the approximate place of a Confederate commander's death was vandalized over the weekend.

On Monday morning, the Turner Ashby Monument was covered in red paint, which appeared to have been splashed over the monument from outside the fence surrounding it.

Mary Eshbaugh, a woman who filed the police report, said she took her son to the monument on Sunday, Feb. 3, to take a photo for a high school history project. But when she arrived, they discovered the vandalism, which she said appeared to have happened recently at that point.

"As we got closer I noticed I could see something bright red in the distance," Eshbaugh said. "When we got up close enough I noticed that half the monument was splashed in dry red paint."

The monument commemorates Confederate cavalry commander Turner Ashby, who was killed on June 6, 1862, during the Battle of Good's Farm.

A group known as the Turner Ashby Memorial Association raised funds from Rockingham County and Harrisonburg citizens in 1897 to erect a monument in his honor, and unveiled the monument on June 6, 1898, 36 years after his death. The group was spearheaded by the United Daughters of the Confederacy, which led a nationwide push through the late 1800s and early 1900s to erect Confederate monuments and rename public buildings in honor of Confederate leaders across the South.

In 2017, the monument was added to the Virginia Landmarks Register by the Virginia Department of Historic Resources.

"It's a way to save these monuments," said Ann Alterman, the Vice President of the Turner Ashby chapter of the Daughters of the Confederacy at the time. "By getting it on the registry, we're hoping that it stays here for as long as it holds up."

It's the only known Confederate monument in Virginia to commemorate through its placement the site where a Confederate soldier was mortally wounded in battle.

Just last year, the monument was vandalized as well, when someone threw eggs, raw meat, and other substances on it.

"It's sad that it's gotten to the point that you have to destroy something to get attention," said Eleanor Price, with the United Daughters of the Confederacy, then. "It's frustrating. Everyone should respect everybody's history and work together."

That time, crews were able to power-wash the monument clean in a few hours. However, paint requires more extensive work to clean.

The Harrisonburg Police Department told WHSV they are working with the owners of the site to investigate the incident, which could be charged as a Class 1 misdemeanor, or, if the damage is assessed at over $1,000, as a Class 6 felony.

Police are also working to find ways to prevent any future similar incidents.

The monument is far from the first honoring Confederate leaders to be vandalized. In recent years, the city of Charlottesville has worked to clean vandalism from statues of Generals Robert E. Lee and Thomas "Stonewall" Jackson multiple times. At least two people have been arrested for one of those incidents.

But those monuments are large statues erected in honor of the generals in public, city-owned places. The Turner Ashby Monument, on the other hand, sits on private property to mark the spot of Ashby's death as a memorial.

Turner Ashby, originally buried in Charlottesville, was reinterred in Winchester in 1866.

Anyone with information about the vandalism is asked to contact the Harrisonburg Police Department.