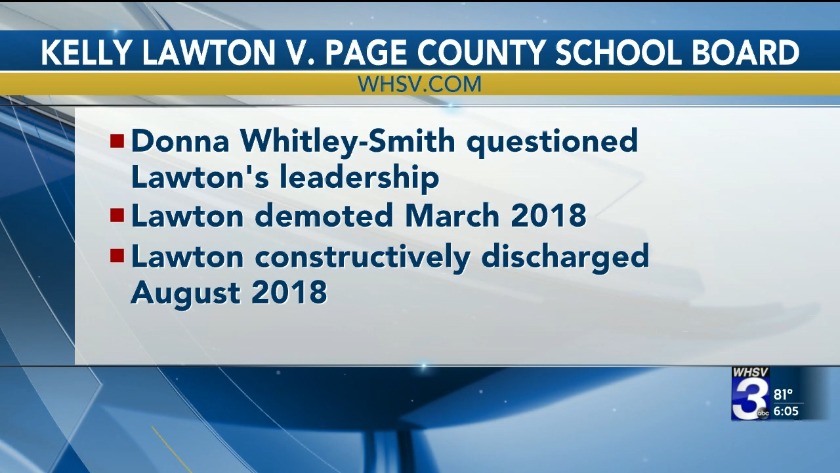 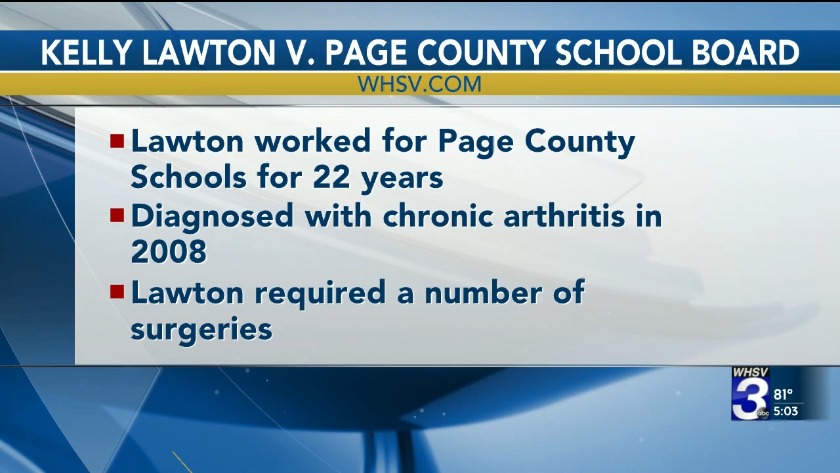 PAGE COUNTY, Va. (WHSV) — Former Luray Middle School principal Kelly Lawton is suing the Page County School Board. She claims she was demoted and discriminated against because of her osteoarthritis and seropositive Rheumatoid Arthritis.

According to federal court documents, Lawton worked for Page County Schools for 22 years, and she was promoted to principal in 2010.

She said she had been experiencing increased symptoms in the past few years of her chronic arthritis conditions, which she said required a number of surgeries and time off work.

In court documents, Lawton claimed she had been able to perform her duties as principal despite the time she said she was entitled to take off under the Family Medical Leave Act of 1993 (FMLA).

She claimed she did not exceeded the amount of time off she is entitled to under FMLA or under the school's policy.

The superintendent at the time, Donna Whitley-Smith, allegedly confronted Lawton multiple times with concerns of how much time she took off, questioned her leadership, and put Lawton on a performance improvement plan.

Lawton claimed she met the requirements of the plan, but was told she would be demoted to a teaching position with less pay, court documents read.

Lawton felt she was unable to perform adequately in that position due to her chronic condition. The documents also state she would have received a dramatic income decrease.

Both of these factors led to Lawton being constructively discharged.

Lawton claimed in the documents that as a result of these things, she is suffering from "severe emotional distress, humiliation, embarrassment, injury to her reputation, anxiety and depression, and other loss and damage."

Lawton is seeking compensation for what she says are the school board's violations of the Family Medical Leave Act of 1993, the American Disabilities Act of 1990 and Title VII of the Civil Rights Act of 1964.

We reached out to the Page County School Board. They say it is a personnel matter.