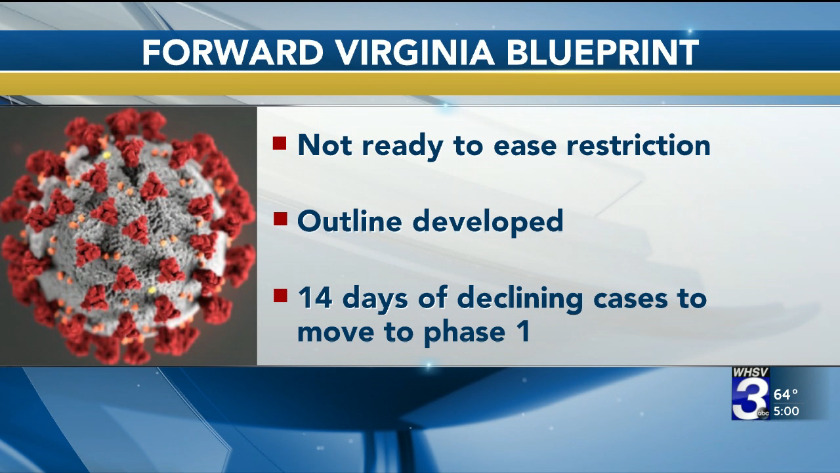 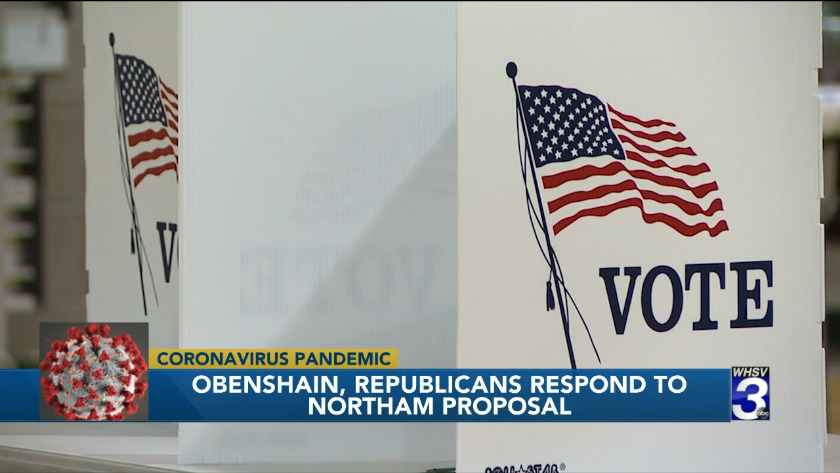 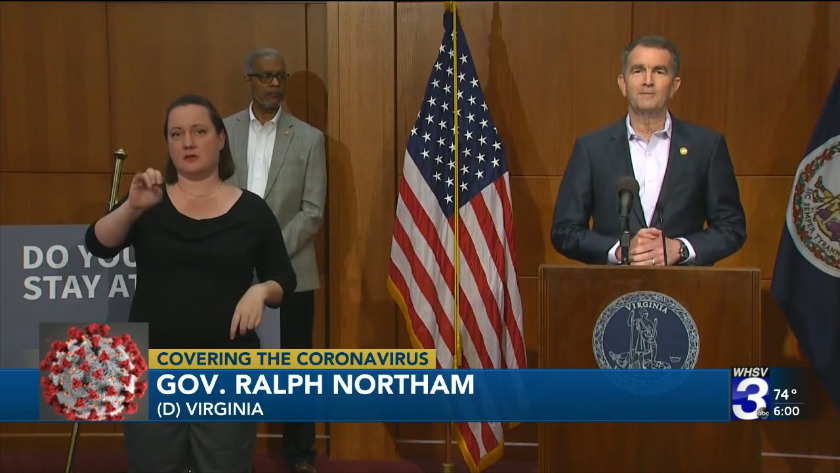 Ralph Northam requests to Move May Elections to November

Among other announcements on Friday as Governor Ralph Northam announced guidelines on when Virginia will be able to reopen, the governor announced that he would be postponing the upcoming local elections in May.

Earlier this month, Northam announced that he was postponing Virginia's June primaries by two weeks and recommending that the local elections scheduled in May be delayed until the same time as November general elections.

But the move of local elections required approval by state lawmakers, and on Wednesday, when the General Assembly re-convened to consider amendments, they did not act to postpone May's local elections.

Initially, the House of Delegates voted along a slim majority not to adopt the amendment. After debate, confusion and technicalities, the amendment passed with two votes. The Senate, which accepted most budget recommendations, simply did not vote on moving the May elections.

Delegate Mark Levine, who voted to accept the amendment, said this means elections would be held in May, despite public health concerns. He suggested that since the Senate did not vote to move the elections, the senators should man the polls.

Now, on Friday, Northam said he was invoking his statutory authority to postpone the May local elections by two weeks, from May 5 to May 19.

The Virginia governor holds the authority to move any elections by up to two weeks.

With Northam saying in Friday's press conference that he hopes restrictions may be able to start easing around May 8 — if increased testing shows cases declining by the right amount by then — pushing back the election date could help amid the pandemic.

In Northam's Friday announcement, he slammed the Senate for their lack of action.

“Virginians should never have to choose between casting a ballot and risking their health,” said Governor Northam. “I am grateful to the House of Delegates for taking action to move our upcoming elections, but unfortunately the Senate failed to make the same commonsense decision. While we strongly encourage every Virginian who can vote by mail to do so, we will also take every necessary step to conduct these elections in a way that ensures in-person voting is done safely and responsibly.”

The governor has directed the Virginia Department of Elections to provide general registrars the latest CDC guidance to maintain social distancing and sanitization standards at all polling locations in the state.

Northam is encouraging voters to vote absentee by mail for any general or special election on May 19, if that is at all possible for them.

The General Assembly's recently passed law to allow no-excuse absentee voting hasn't yet taken effect — so the Department of Elections advises people requesting an absentee ballot to choose the reason of having a disability or an illness.

How to request an absentee ballot

Voters can request online that an absentee ballot be mailed to them at elections.virginia.gov/voterinfo or by downloading and printing a request form at elections.virginia.gov/forms and then returning the completed and signed form to their local General Registrar’s office by mail, fax, or scanned attachment to an email. Contact information for General Registrar offices is on the form. Forms are also available in Spanish, Vietnamese, and Korean.

Voters completing a paper application may use reason 2A, “my disability or illness” to complete their form. Voters completing an online application to request an absentee ballot will need to follow the prompts and select “I have a reason or condition that prevents me from going to the polls on Election Day.” You will then have the option to choose “my disability or illness” as the reason for your request.

“Elections are a critical function of our government,” said Attorney General Mark Herring. “We will do everything in our power to maintain the integrity of our democratic process while ensuring the safety of all Virginians.”

Local General Registrar offices must receive mailed-in requests for absentee ballots for the May 19, 2020 election by 5:00 PM on Tuesday, May 12, 2020. Voters are advised to apply immediately to account for any potential delays in mail delivery.

Absentee ballots returned by mail must be received by the local General Registrar by 7:00 PM on Election Day, May 19, 2020. Voters can find contact information for their local General Registrar at elections.virginia.gov/localGR. Voters are encouraged to mail their completed ballots as soon as possible to ensure they arrive before the deadline.

“This is the most challenging time in election administration that any of us have ever lived through,” said Allison J. Robbins, President of the Voter Registrars Association of Virginia. “Registrars across Virginia are committed to ensuring that every election official feels protected while performing their duties on Election Day. Registrars are equally committed to ensuring the safety and security of all voters and ensuring that voters can cast their ballots with confidence that they will be counted.”

The Department of Elections is recruiting election officers to work at polling locations for the upcoming elections. Election officers are always in demand, but their service is needed even more now as the elections process faces unprecedented challenges. Election officers perform a wide range of functions on Election Day, including setting and up and breaking down activities at polling locations, providing voters with basic voting instructions, verifying voter information, and assisting with other duties as needed.

The Governor encourages college and university students to become involved as election officers, especially when many retired Virginians—a population that traditionally serves as election officers—are at a higher risk for complications from COVID-19. While working as an election officer, students are not only able to help their communities, but they are also eligible for compensation, according to the governor.

The executive orders in full

The full text of Executive Order Fifty-Nine , postponing the May 5, 2020 General and Special Elections to May 19, 2020 is available here.

Governor Northam amended Executive Order Fifty-Six, postponing the June primary election, directing the Department of Elections to work with the Virginia Department of Health and the Virginia Medical Reserve Corps and provide support to election officials. The full text of the amended executive order is available here.

As the Virginia General Assembly convened with abnormal accomodations due to COVID-19 on Wednesday, lawmakers considered hundreds of amendments to legislation and the state budget that had been proposed by Governor Ralph Northam.

One of the biggest topics was an amendment that the governor announced in one of his COVID-19 briefings earlier this month. On April 8, Northam announced that he was postponing Virginia's June primaries by two weeks and recommending that the local elections scheduled in May be delayed until the same time as November general elections.

“As other states have shown, conducting an election in the middle of this global pandemic would bring unprecedented challenges and potential risk to voters and those who work at polling places across the Commonwealth,” said Governor Northam. “Making these decisions now will help election officials prepare and implement the necessary changes. This is about protecting the health and safety of Virginians during this pandemic and ensuring our citizens can make their voices heard in a safe, fair, and uniform manner. I urge the General Assembly to do their part and take action to move our upcoming elections.”

Northam said his recommendations were made after discussing the changes with Virginia's congressional delegation, as well as leaders in the state House and Senate.

But on Wednesday, lawmakers did not pass the measure.

Initially, the House of Delegates voted along a slim majority not to adopt the amendment. After debate, confusion and technicalities, the amendment passed with two votes. The Senate, which accepted most budget recommendations, simply did not vote on moving May elections.

Delegate Mark Levine, who voted to accept the amendment, said this means elections will be held in May, despite public health concerns. He suggested that since the Senate did not vote to move the elections, the senators should man the polls.

Many Republican lawmakers, who became the minority party this past year, but by a closer margin in the Senate, disagreed with the local election proposal from the time of its announcement.

“We sincerely hope the Governor will reconsider his proposal," Sen. Mark Obenshain said at the time. "There is an option that keeps Virginians safe and healthy, keeps local self-determination in place, does not subordinate local issues to the furor and din of a Presidential election, and maintains the high level of integrity that our electoral system requires and that our citizens expect.”

Obenshain said the reason for holding local elections at a separate time from November is to "avoid the hyper partisan rhetoric that overshadows all November elections – especially in a Presidential election year."

Obenshain and other Shenandoah Valley General Assembly members said they thought a better option would have been to move local elections to June 23, the same date to which Northam moved statewide primary elections

But since the Senate took no vote on the governor's recommendation to move May elections, they will remain as scheduled.

What to know about preventing the virus

Most people don't suffer much from COVID-19, but it can cause severe illness in the elderly and people with existing health problems.

The coronavirus that causes COVID-19 can cause mild to more severe respiratory illness. In a small proportion of patients, COVID-19 can cause death, particularly among those who are older or who have chronic medical conditions. Symptoms include fever, cough, and difficulty breathing. Symptoms appear within 14 days of being exposed to an infectious person. COVID-19 spreads primarily through respiratory droplets produced when an infected person coughs or sneezes.

To lower the risk of respiratory germ spread, including COVID-19, the Virginia Department of Health encourages the following effective behaviors:

• Wash your hands often with soap and water for at least 20 seconds. Use an alcohol-based hand sanitizer only if soap and water are not available.
• Avoid touching your eyes, nose, and mouth.
• Cover your mouth and nose with a tissue or your sleeve (not your hands) when coughing or sneezing.
• Clean and disinfect frequently touched objects and surfaces.
• Stay home when you are sick.
• Avoid contact with sick people.
• Avoid non-essential travel.

For the latest factual information on COVID-19, you're encouraged to check both the Virginia Department of Health and the CDC.

City of Staunton’s local election will move from Tuesday, May 5 to Tuesday, May 19 aligning with Governor Northam’s latest executive order.

City of Staunton poll stations will be open on Tuesday, May 19; however, citizens are strongly encouraged to vote by absentee ballot. Applications for absentee ballots must be received by May 12 at 5 p.m. and can be submitted online, by U.S. mail or by emailing the Registrar. In-person absentee voting, taking place in the Johnson Street parking garage, will be available until May 16. For instructions and additional information on how to vote by mail, visit the Registrar’s website.

In addition to the date change, the polling location for Ward 2 has moved from Christ United Methodist Church to Gypsy Hill Park Gymnasium located at 116th Regimental Road. To find your Voting Ward click here.

To ensure the safety of citizens, election officials and volunteers on Election Day, several measures have been implemented. The Electoral Board is following social distancing protocols for Election Day, to include control of the flow of voters through polling stations to maintain a proper distance of six feet. Polling locations will have sneeze guards on polling tables, and hand sanitizer, hand soap and Lysol wipes will be on-hand.

The Registrar is also equipping volunteers with face masks and gloves and election offices with shields. Voters are encouraged to wear masks and will be asked to observe social distancing.

For questions regarding the upcoming elections and voting procedures contact the Registrar’s Office at 540.332.3840.