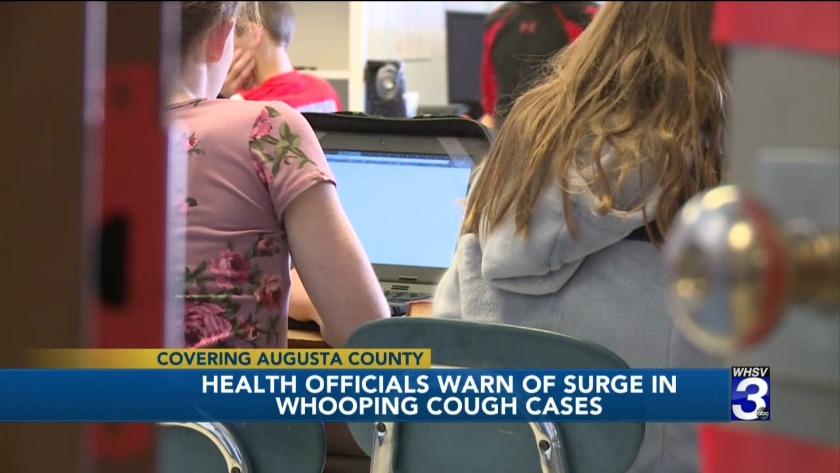 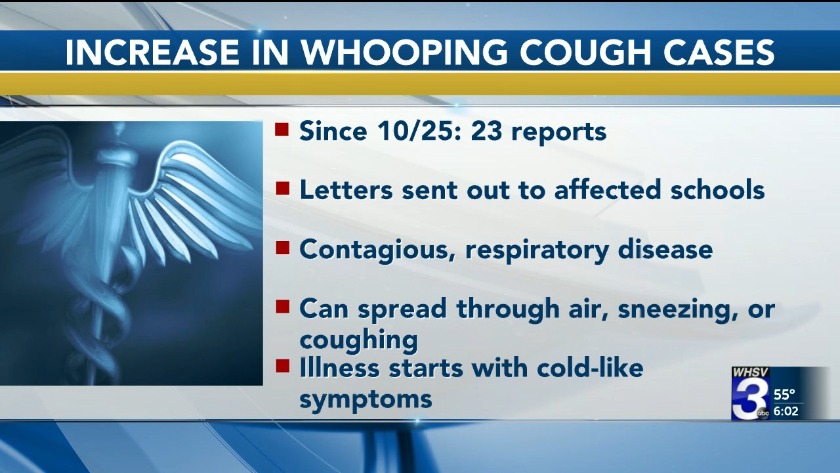 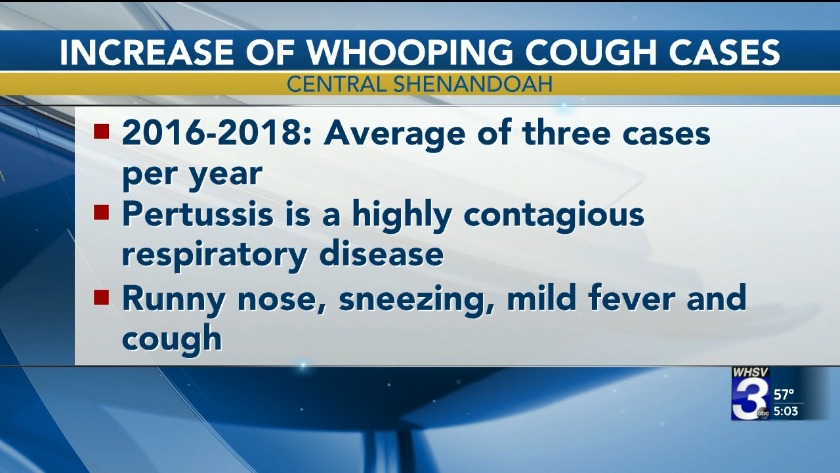 Whooping cough confirmed in the Valley

STAUNTON, Va. (WHSV) — The Virginia Department of Health has issued a warning about a recent surge in whooping cough cases in the Shenandoah Valley.

Earlier this week, parents and staff members at Hugh K. Cassell Elementary School in Augusta County received letters from the Central Shenandoah Health District about a confirmed case of pertussis (the scientific name for whooping cough) at their school.

The cases have been reported among children, teens, and adults.

That's a massive increases from the norm, which, from 2016 through 2018, was an average of 3 cases a year in Augusta County, Waynesboro and Staunton.

The Virginia Department of Health reports that their staff is working with health care providers in the Shenandoah Valley and working with school faculty to identify, treat, and exclude patients from group activities at school, work, or sports.

Separating patients with the disease from others is essential to prevent its spread, considering how contagious it is. Anyone with it should stay home until treatment is complete.

In response, the health departments sent letters to parents, faculty, and staff at all schools affected.

How the vaccination plays in

According to the health department, the majority of the 23 patients with confirmed cases of pertussis were previously vaccinated against it, so they're emphasizing awareness that you can still get the disease even if you've been vaccinated in the past — That's because the pertussis vaccine has historically had varying effectiveness and diminishing results over time.

That doesn't mean you shouldn't get the vaccine though — the newest version of it prevents illness for the vast majority who receive it and also helps to prevent other severe respiratory illnesses in infants, immune-compromised and elderly patients.

Health officials also recommend getting a booster shot to vaccinate against pertussis about every 10 years to keep your immune system in the best shape it can be against the disease.

The symptoms of pertussis

Pertussis, or whooping cough, is a highly contagious respiratory disease caused by bacteria spread through the air in droplets from sneezing or coughing.

The illness typically begins with “cold-like” symptoms, including runny nose, sneezing, mild fever and cough. Newly infected persons are most contagious during the first week of illness when cold-like symptoms are present. If left untreated, infected individuals may develop a more severe respiratory illness that includes coughing fits accompanied by difficulty breathing, gagging or vomiting, or a cough that is followed by a high pitched “whooping” noise as the person tries to catch his or her breath.

If you or your child has developed those symptoms, you should seek evaluation from a medical professional and avoid public or group settings.

Anyone diagnosed with pertussis should take all prescribed medications (usually a five-day course of antibiotics) and stay at home, avoiding group activities to prevent the spread of the disease.

The health department also recommends keeping all infants and other high-risk individuals away from anyone with respiratory-like illness, including those with confirmed and suspected cases of pertussis.

The best form of prevention of pertussis is for all babies, children, teens, and adults who are able to be vaccinated against it, providing what medical professionals call herd immunity.

Talk to your doctor to see if you or your child may need another dose of the vaccine to protect against pertussis.

Like many respiratory illnesses, including the flu, pertussis is spread by coughing and sneezing while in close contact with others, who then breathe in bacteria.

• Cover your mouth and nose with a tissue when you cough or sneeze. If you do not have a tissue, you can cough or sneeze into your upper sleeve or elbow, not your hands.
• Wash your hands frequently with soap and water for at least 20 seconds. If you do not have access to a sink with soap, alcohol based hand sanitizers may be used.
• Do not share food, drinks, vaping products or anything that has come into contact with someone else’s saliva.
• If you are ill, stay at home.

You can contact your local health department with any questions about the increase in cases of pertussis:

For more information about pertussis, see the Department of Health website.