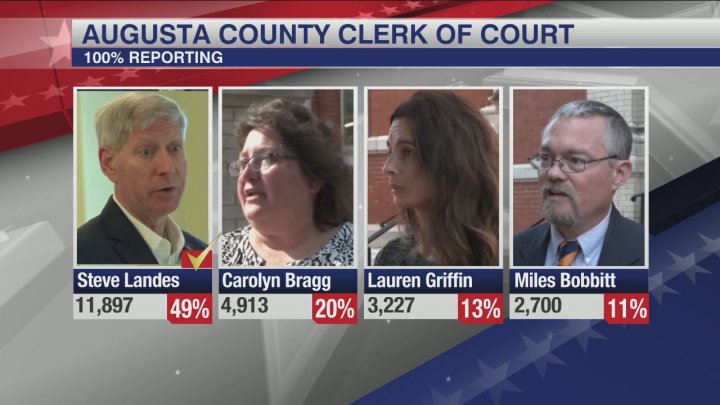 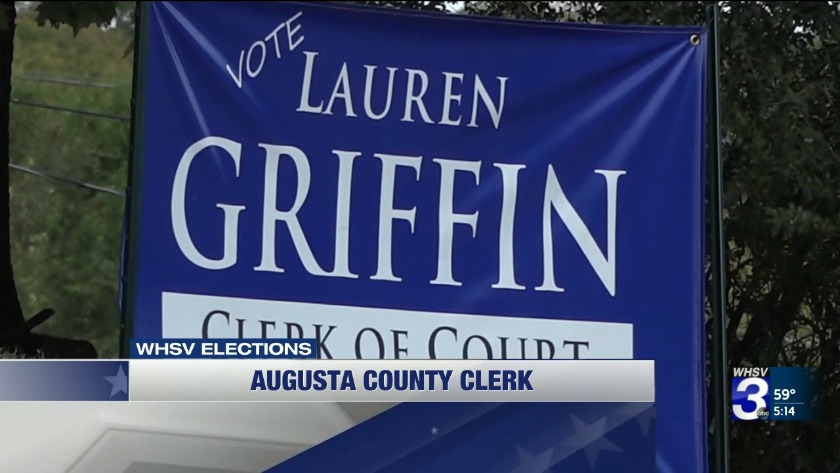 Landes received 49% of the vote on Tuesday night, with Carolyn Bragg getting 20%, Lauren Griffin getting 13%, Miles Bobbitt getting 11%, and Tracy Pyles getting 6%.

"I'm very excited, very thankful for the people of Augusta County for entrusting me to be the Clerk of Court for Augusta County," Landes said Tuesday night. "I'm looking forward to the challenge and opportunity – there's a great staff that works in the clerk's office. It's been a great honor to serve people in the House of Delegates for over 20 years, and I want to continue to be able do to do that in this new role."

Landes currently represents the 25th district in the Virginia House of Delegates. He has held that position since 1996, but announced earlier this year he would not run for re-election to instead rim for Clerk of Court.

Earlier in the campaign, Landes outlined nine goals he would set as Clerk of Court in three different categories: innovating and working for all, preserving and promoting history, and seeking input and advice.

In September, Landes said his most important priority is learning the role of Clerk of Court. He plans to shadow each person on staff. Landes also wants to look into adding technology to help assist the clerk staff with workload, consider offering passports at the office again and look at the possibility of offering plastic concealed weapon permit cards.

Landes also hopes to create an advisory committee to gather input from the county. He said it would be made up of county residents from the Bar Association, Association of Realtors, the historical society and the genealogical society.

Landes announced he would not seek reelection in the House of Delegates earlier this year, opting to run for this position.

The Code of Virginia lists more than 800 responsibilities for the Clerk of Court, including everything from recording EEDs to issuing marriage licenses and maintaining court records.

You can find profiles of the other four candidates below:

Miles Bobbitt is one of five candidates hoping to become the next clerk of court in Augusta County. Bobbitt is currently the director of the Valley Alcohol Action Safety Program, and he thinks that experience will help him if elected.

If elected, Bobbitt said he wants to focus on making sure the key services of the clerk's office are done well, including making sure partner agencies have what they need.

"We need to make sure our partner agencies are getting the information they need in a timely manner," Bobbitt said. "There's a lot of agencies in the community that rely on information coming out of the clerk so that they can do their job."

However, it's not just partner agencies using clerk services. Bobbitt said it's important to be responsive to citizens and their needs as well.

"It's not just lawyers, it's not just department of corrections, or probation officers that need the clerk," Bobbitt said. "Every citizen has business at the clerk, and I think we need to be responsive to that."

Bobbitt is running against Steve Landes, Carolyn Bragg, Tracy Pyles and Lauren Griffin for the job. You can click on each candidate's name to see our previous coverage of them.

Carolyn Bragg is one of five candidates running for Clerk of Court in Augusta County. Bragg said she became interested in the position a few years ago during the courthouse referendum.

Bragg, currently serving on the board of supervisors, thinks the position would be a good way to continue serving the community. Bragg said she thinks the court staff already works well together. She said she plans to make herself available to the community for any questions or concerns they may have.

"Whether they're in Mount Solon or Newport, or Craigsville, that they're comfortable to come in to my office and sit down and talk to me and make suggestions and comments and really share their thoughts," Bragg said.

We've already spoken with Steve Landes, Tracy Pyles and Lauren Griffin about their goals if elected. We're catching up with Miles Bobbitt next week.

Pyles said he also wants to improve the website.

"I'll do that by having an interactive website, where people in far reaches of the county can make sure they have all the information they need before they make a needless trip to the courthouse," Pyles said.

Pyles said he thinks those changes will benefit people, since the courthouse can sometimes be a challenge to get to.

"The improvements to how we can do things better for our citizens," Pyles said. "Being here in downtown is difficult for many of our folks. The parking, the topography."

Pyles said he also wants to honor the veterans on the plaques outside of the circuit courthouse with more individualized honors inside. Additionally, Pyles wants to stop charging people for concealed carry permits. Until that change is made at the state level, Pyles said they would pay for the changes out of his salary, if elected.

He said he's not running for the position for the salary, but rather to make changes to benefit the county residents.

Pyles is running against Steve Landes, Carolyn Bragg, Miles Bobbitt and Lauren Griffin for the position. You can find our interview with Landes here . WHSV plans to interview each of the people running for office in the weeks leading up to the election.

Lauren Griffin is a paralegal in the Augusta County Commonwealth Attorney's office, but she hopes her next job will be as clerk of court for the county.

Griffin is one of five running to fill the rest of Carol Brydge's term. Steve Landes, Tracy Pyles, Carolyn Bragg and Miles Bobbitt are also running for the role. Griffin said she decided to run because of her experience as a paralegal.

Griffin said she thinks it's important to have realistic goals, since whomever wins will only be in office for four years at first. Griffin thinks the staff already works well together now, but she would want to support them through a possible move, if the county makes a decision about the court house.

"Just really making sure the needs of the community are met during that time and the office can still function and everybody feels comfortable,' Griffin said.

She also thinks its important to be responsive to the community and their needs.

"That's the whole job, is serving the community with whatever legal documents it needs," Griffin told WHSV.

Griffin said she knows there has been some discussion of people wanting the court house to start providing passports again and she said that would be something she would look into if elected.

WHSV has already spoke with Steve Landes and Tracy Pyles about their goals. In the weeks ahead, we'll plan to speak with the rest of the candidates.