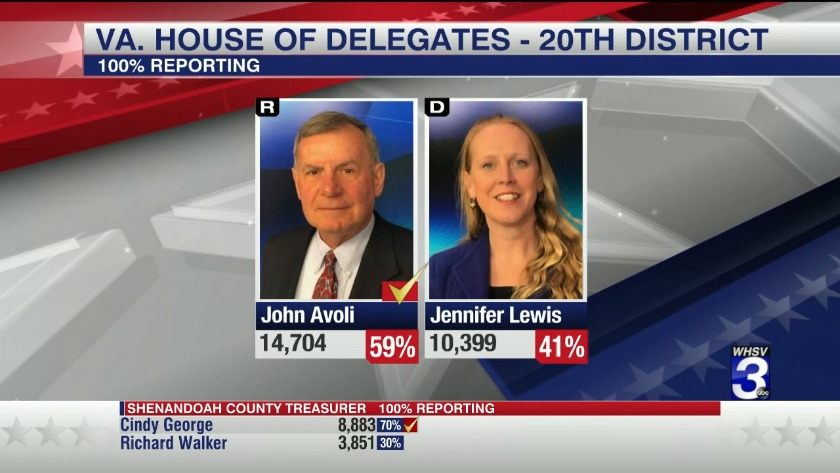 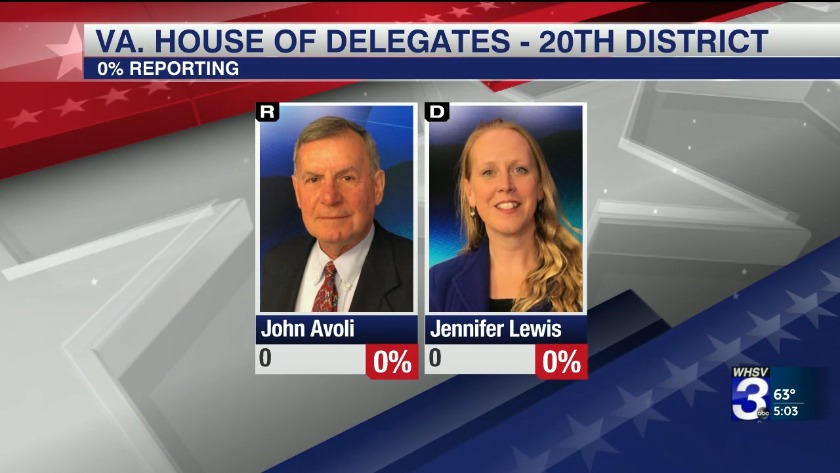 With 57% of the vote, John Avoli has been declared the winner in the race for the 20th District of Virginia's House of Delegates.

Avoli and his supporters rallied at the Staunton Elks Lodge. When our reporter walked in, everyone was excited as Avoli was declared the winner.

He said the campaign was long, and he's excited to relax for a few weeks before taking over the seat from Dickie Bell next year.

He is eager to serve all people of his district. He said he plans on starting by focusing on improving public education in the state, with his two main interests being early childhood education and adding more vocational programs for students.

"Multitude of brick layers, machinists, we need welders, and these are jobs that people are crying for. They're going unfilled, and as a former principal of the valley vocational technical center, that's one of my big things here, no question about it," Avoli said.

Avoli said he's also proud that he and his opponent, Jennifer Lewis, ran a positive campaign, and he is looking forward to relaxing a bit now before starting the job.

In the race for the 20th House of Delegates, two candidates are looking to take over Dickie Bell's seat. Bell was voted in in 2010, and announced in late 2018 that he would not be running for re-election.

John Avoli has worked as an educator at some of the county schools. He was a teacher at Wilson Memorial High School, assistant principal at Valley Vocational Technical Center, and later principal principal at Stuarts Draft High School.

He also served as Staunton's mayor for 14 years.

He came out of the June primaries beating Dave Bourne, and he is hoping to keep the seat red.

Jennifer Lewis, on the other hand, is looking to switch things up.

She's worked as a mental health worker for a number of years, has been a volunteer in the community for The Boys and Girls Club and Big Brothers Big Sisters, and has been a leader in the fight against the Atlantic Coast Pipeline. She founded Friends of Augusta, a pipeline opposition group.

While these candidates do have different views of how they want to create change for their district, they don't disagree on everything.

Both candidates are in favor of strengthening broadband services and making healthcare more affordable.

Avoli is totally opposed to the legalization of marijuana, saying we don't need to add a possibly problematic situation to the area.

Lewis says she is strongly in favor of it, saying it would give farmers another potential cash crop.

Avoli is a strong supporter of the second amendment as an NRA member, and Lewis is hoping for more safety measures to be put in place for gun purchases.