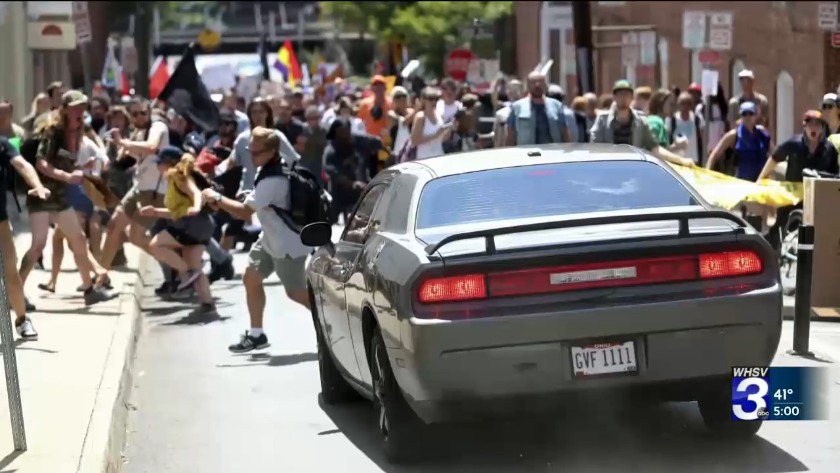 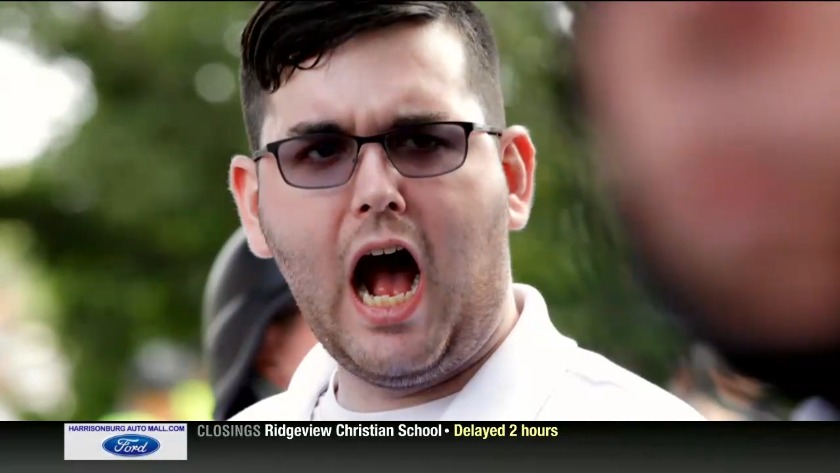 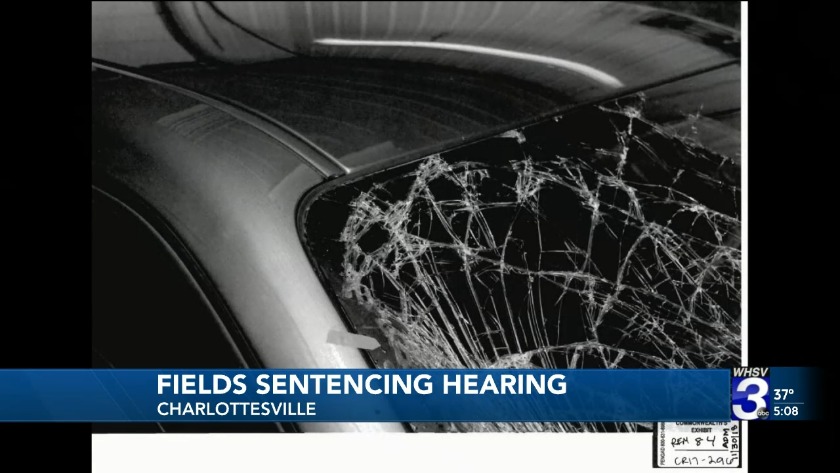 Jury gathering once more for sentencing of Fields 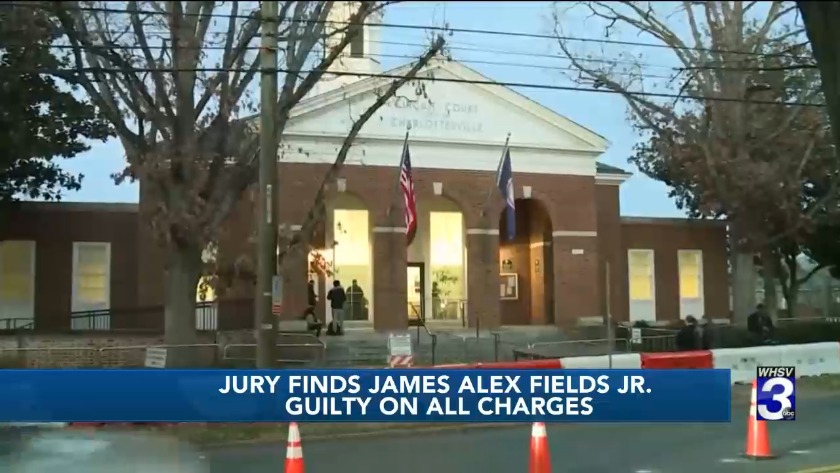 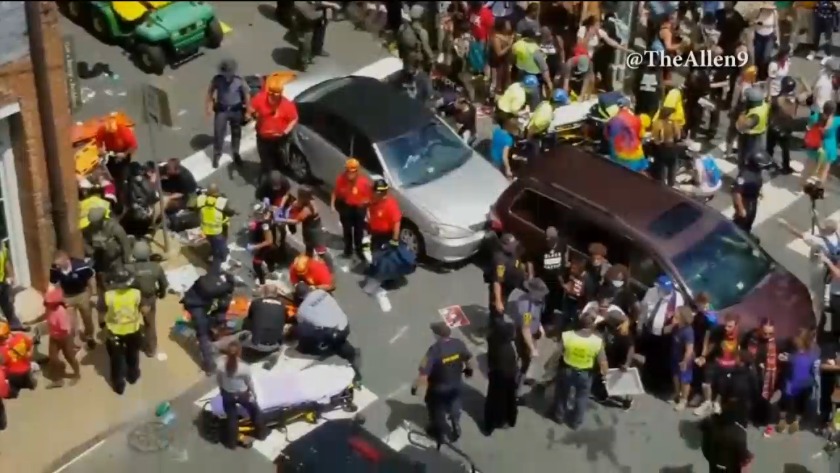 Jury will decide the fate of neo-Nazi Fields

A sentencing hearing has been delayed for a man convicted of driving his car into a crowd of counterprotesters at a 2017 white nationalist rally in Virginia.

James Alex Fields Jr., of Maumee, Ohio, was convicted in December of first-degree murder in the killing of anti-racism activist Heather Heyer and multiple charges for injuries caused to others.

The jury recommended life in prison, plus 419 years.

A sentencing hearing was originally scheduled for March 29. But an online court docket entry shows the hearing has been postponed until July 15. No reason was given for the postponement.

Judge Richard Moore will decide on Fields' punishment. Judges in Virginia often go along with the jury's recommendation. Under state law, they can impose a shorter sentence but not a longer one.

The jury that convicted white nationalist James Alex Fields, Jr. of murdering Heather Heyer and wounding several others when he plowed a car into a crowd of protesters in Charlottesville on Aug. 12, 2017, has reached a consensus on sentencing recommendations after about four hours of deliberation spread out over two days.

The total recommended sentence amounts to life plus 419 years in prison and $480,000 in fines.

Judge Richard Moore will formally sentence Fields in a hearing on March 29 at 9:30 a.m.

Judges in Virginia often impose the sentence recommended by juries. Under Virginia law, judges can impose sentences lower than what the jury recommends, but cannot increase sentences.

The jury deliberated for just under two hours Monday after hearing emotional testimony from the mother of Heather Heyer, a 32-year-old paralegal and activist who was killed when Fields rammed his car into a crowd at a "Unite the Right" white nationalist rally in Charlottesville on Aug. 12, 2017. On Friday, the same jury rejected Fields' lawyers' arguments that he had acted in self-defense.

Fields could face the death penalty on separate federal hate crime charges, for which a trial has not been scheduled yet.

A jury began its second day of deliberations Tuesday on a sentencing recommendation for a man convicted of killing a woman and injuring dozens when he drove his car into counterprotesters at a white nationalist rally in Virginia.

Under the law, the jury, which convicted James Alex Fields Jr. last week of first-degree murder and nine other charges, can recommend from 20 years to life in prison on both that charge and each of five charges of aggravated malicious wounding.

Fields also faces five to 20 years on three counts of malicious wounding, and up to 10 years on one count of leaving the scene of an accident. Judge Richard Moore will formally sentence Fields. Judges in Virginia often impose the sentence recommended by juries.

Under Virginia law, judges can impose sentences lower than what the jury recommends, but cannot increase sentences.

The jury deliberated for just under two hours Monday after hearing emotional testimony from the mother of Heather Heyer, a 32-year-old paralegal and activist who was killed when Fields rammed his car into a crowd at a "Unite the Right" white nationalist rally in Charlottesville on Aug. 12, 2017.

Jurors also heard from several people who suffered severe injuries. A psychologist testifying for the defense said Fields has a long history of mental health issues, including bipolar disorder.

Heyer's mother, Susan Bro, told the jury her daughter's death has been like an "an explosion in our family.

"We are forever scarred by the pain," she said.

Jeanne "Star" Peterson said her life has been "a living nightmare" since she was hit by Fields' car. Her right leg was shattered, and she's had five surgeries to try to repair it. She also suffered a broken spine and still hasn't been able to return to work.

"I will be dealing with the aftermath of Fields' choices for the rest of my life," Peterson said.

Fields, 21, drove to Virginia from his home in Maumee, Ohio, to support the white nationalists. After the rally, as a large group of counterprotesters marched through Charlottesville singing and laughing, he stopped his car, backed up, then sped into the crowd, according to testimony from witnesses and video surveillance shown to jurors.

Wednesday Bowie, a counterprotester who got caught on the trunk of Fields' car when he backed up and was then slammed into a parked truck and thrown to the ground, told the jury that in addition to a broken pelvis and other physical injuries, she has been hospitalized three times for post-traumatic stress disorder over the past year.

She told the jury: "Please know that the world is not a safe place with Mr. Fields in it."

Testifying for the defense, University of Virginia School of Medicine professor and psychologist Daniel Murrie told the jury that while Fields was not legally insane at the time, he has a long history of mental health issues.

Fields had inexplicable volatile outbursts as a young child and was diagnosed with bipolar disorder at age 6, Murrie said. He was later diagnosed with schizoid personality disorder.

Murrie said Fields went off his psychiatric medication at age 18 and built an isolated "lifestyle centered around being alone."

A video of Fields shown to the jury during the first phase of the trial showed him sobbing and hyperventilating after he was told a woman had died and others were seriously injured.

Fields' lawyer Denise Lunsford called him a "mentally compromised individual" and urged the jury to consider his long history of mental health issues when considering a sentence.

The Unite the Right rally had been organized in part to protest the planned removal of a statue of Confederate Gen. Robert E. Lee. Hundreds of Ku Klux Klan members, neo-Nazis and other white nationalists — emboldened by the election of President Donald Trump — streamed into the college town for one of the largest gatherings of white supremacists in a decade. Some dressed in battle gear.

Afterward, Trump inflamed tensions even further when he said "both sides" were to blame, a comment some saw as a refusal to condemn racism.

According to one of his former teachers, Fields was known in high school for being fascinated with Nazism and idolizing Adolf Hitler. Jurors were shown a text message he sent to his mother days before the rally that included an image of the notorious German dictator. When his mother pleaded with him to be careful, he replied: "we're not the one (sic) who need to be careful."

Fields is eligible for the death penalty if convicted of separate federal hate crime charges. No trial has been scheduled yet.