would have scaled back regulations on late-term abortions

in the third trimester.

Similar legislation has been voted down twice before.

“When I saw it from New York, it was extremely disturbing,” Cox said. “Essentially, you have legislation that doesn’t protect the unborn at all. That you can have an abortion up to the point of birth.”

Under Virginia law, third-trimester abortions are allowed but require consultation with three doctors. They then determine if the woman could die or if her health would be “substantially and irremediably impaired” without the procedure.

Under Tran’s bill, it would require just one doctor to sign off, among some other changes.

“I know women in my family, women in my district, and women across Virginia who have had to make the very personal decision as to whether they’re going to have an abortion,” Tran said in a video posted to Twitter Thursday. “That’s why I introduced a bill to repeal the medically unnecessary and unduly burdensome barriers that Virginia women face when they’re accessing this health care service in consultation with their doctor.”

Prominent Republicans accused the governor of supporting “born-alive abortions” and even infanticide.

“I think he was very clear in what he said,” Cox said. “I think that was very disturbing.”

“No woman seeks a third trimester abortion except in the case of tragic or difficult circumstances, such as a nonviable pregnancy or in the event of severe fetal abnormalities, and the governor’s comments were limited to the actions physicians would take in the event that a woman in those circumstances went into labor.”

Thursday, the Governor, along with other Democratic leaders, held a news conference at 3:30 p.m. regarding the late-term abortion legislation:

On Thursday, Del. Kathy Tran corrected her answer that she gave to Del. Todd Gilbert in the video that went viral.

"“I should have said: ‘Clearly, no because infanticide is not allowed in Virginia, and what would have happened in that moment would be a live birth," Tran said.

Abortion rights groups such as the National Association for the Repeal of Abortion Laws and Progress Virginia continue to support Tran. Anna Scholl, executive director of Progress Virginia, said that Tran was a champion for women and that Republican legislators are taking her remarks out of context.

“We trust women to make decisions about their health care needs. Shame on politicians like Todd Gilbert and Kirk Cox for trying to distract us from the real issue here: getting politics out of the doctor’s office,” Scholl said.

Del. Gilbert, a Republican from Shenandoah County, is the House majority leader. At the Republicans’ press conference, he equated abortion to murder. Gilbert said Democrats would allow late-term abortions out of concern not just for a woman’s physical health but also for her mental health.

“It has nothing to do with saving a woman's life. A mental health concern could include anything that you can name that has an identifiable mental health issue -- depression, anxiety, feelings that one gets when one is about to have to care for a child,” Gilbert said.

Originally, 23 Democrats co-sponsored Tran’s bill, but some, including Del. Dawn Adams of Richmond, said they would pull their support. The controversy has made national headlines and drawn widespread condemnation from Republicans. President Donald Trump criticized Northam for speaking in favor of Tran’s bill.

“If Democrats gain control of the General Assembly this fall, they have a Governor who is ready to sign legislation that will remove every protection of unborn children related to abortion,” said Delegate Kathy Byron. “We need to take these words seriously. We need to understand that this is what is yet to come folks.”

“We believe legislators, most of whom are men, should not be making decisions about women’s choices for their reproductive health,” Northam said. “We can agree to disagree on this topic, but we can be civil about it.” Northam said some Republicans were attempting to use the issue to score political points. Attorney General Mark Herring, who also spoke at the press conference, called Republican efforts to discredit Democrats “desperate” and “ugly.”

Delegate Emily Brewer also spoke during the Republican news conference about her upbringing by adoptive parents.

“The testimony I watched earlier this week shook me to my core,” Brewer said. “Back on that day in 1984 I didn’t quite arrive on time, but I lived. Had this legislation been in place, who knows how things could have turned out.” 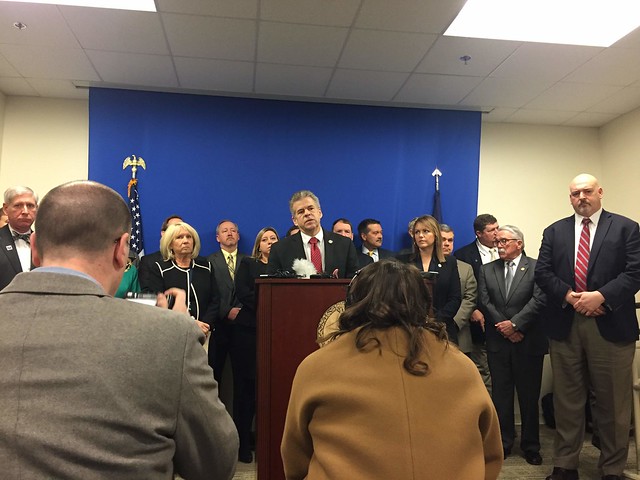