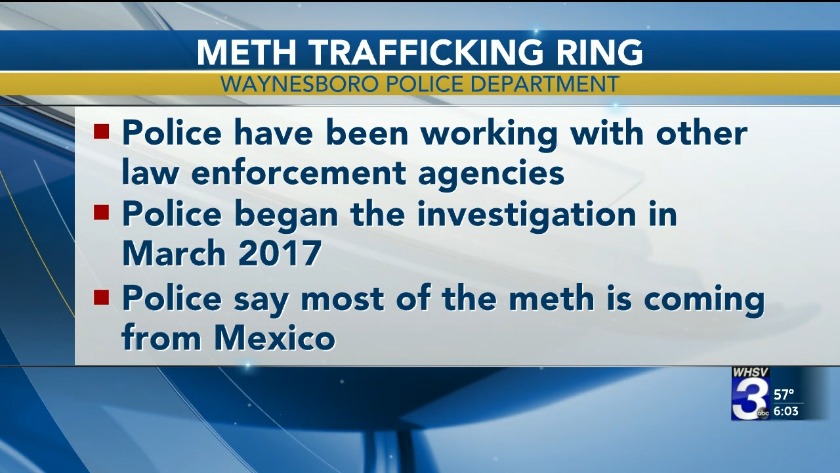 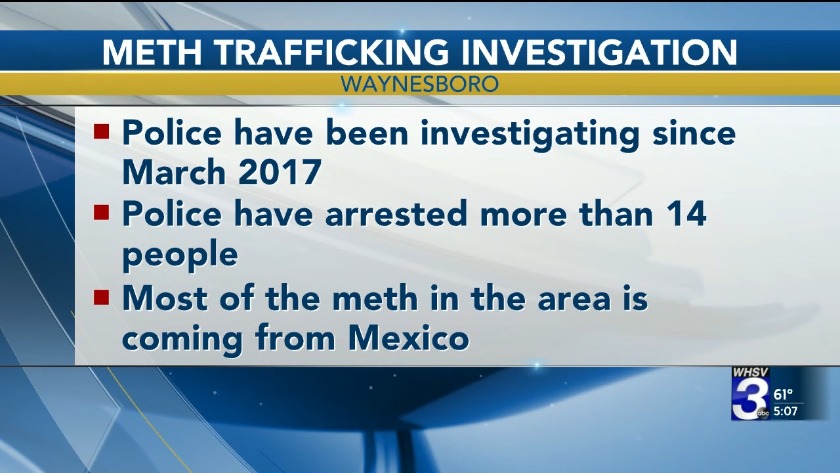 WAYNESBORO, Va. (WHSV) — A year-long investigation into drug smuggling in Waynesboro connected to a Mexican cartel led investigators to a store they say was a front for a large methamphetamine ring in the Shenandoah Valley.

Police say they received a tip about potential trafficking in March 2017.

Over recent weeks, Waynesboro police have cracked down on various levels of meth distribution in the city, announcing a series of arrests beginning in June with arrests on the street level, followed by the sentencing of a Stuarts Draft man in August for distributing nearly half a ton of meth in the Staunton, Waynesboro, and Augusta County area.

By September, officers arrested a Colorado couple with four pounds of methamphetamine in their vehicle, alongside two children, including an infant.

Just days later, another two people were arrested for allegedly acting as methamphetamine couriers in Waynesboro, on behalf of a Mexican drug trafficking organization that police say was recruiting local residents to transport large shipments from the western part of the country to Waynesboro and surrounding areas.

Earlier this month, a Fishersville woman was arrested in connection with the same drug ring for conspiring to distribute over 100 grams of meth.

According to Sgt. F. W. Smith, with the Waynesboro Police Department, the crackdown culminated this past Friday with a raid at Tienda La Mexicana and the arrest of 40-year-old Waynesboro woman Nancy Martinez.

On October 19, Waynesboro officers teamed up with the Waynesboro SWAT team and agents from Homeland Security and U.S. Immigration and Customs Enforcement to execute search warrants at Tienda la Mexicana, a Mexican-themed market at 401 North Poplar Avenue.

The warrants were issued right after Martinez was arrested on four felony charges related to the investigation into the Mexican cartel.

While warrants were carried out at the store, other officers carried out a warrant at Martinez's home in the 500 block of King Avenue.

Martinez, the owner and operators of Tienda la Mexicana, is accused of using at least four of the wire transfer services in her store to send money from local drug dealers back to suppliers in central Mexico.

According to police, she helped head up a ring of drug smuggling and money laundering committed by a network of Mexican foreign nationals who were trafficking large amounts of meth through a network of undocumented immigrants, as well as local people in Waynesboro and throughout the Valley.

She is charged with conspiring to act as one of the principal organizers of a continuing criminal enterprise engaged in the trafficking of methamphetamine, which carries a minimum 20-year sentence, as well as engaging in illegal money transmission which was derived from racketeering activity as a person who owns or operates an enterprise, knowingly conducting a financial transaction where the accused knew the property involved was from illegal and felonious activity, and conspiring to transport methamphetamine into the Commonwealth of Virginia.

More than 14 people have been arrested in connection to the trafficking ring. Police say Martinez's arrest won't be the last as this investigation continues.

‘Get your knee off our necks!’: Floyd mourned in Minneapolis