Staunton man connected to 5 more commercial burglaries around the city 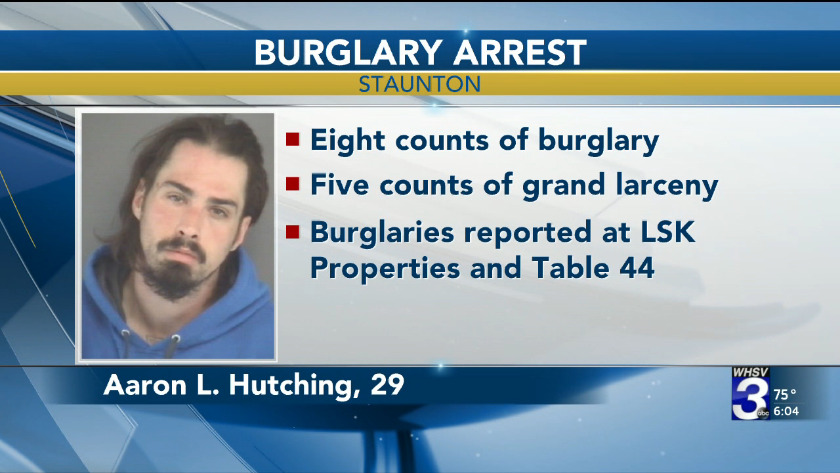 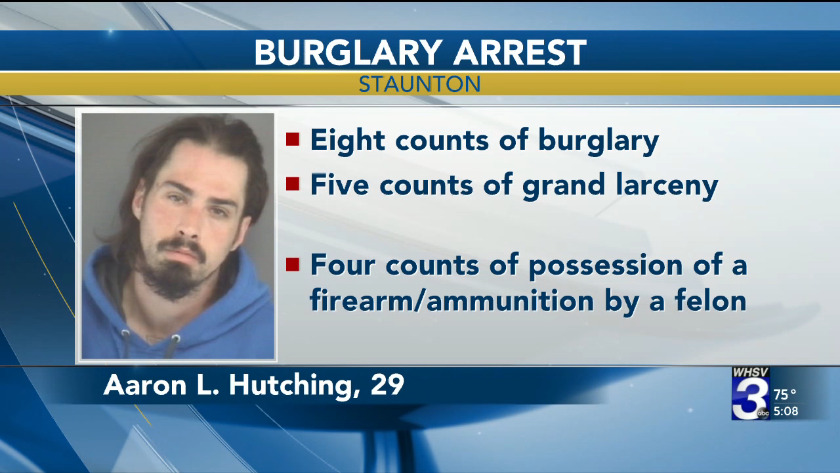 On May 22, 29-year-old Aaron L. Hutching was arrested by Staunton police after officers found evidence linking him to a series of commercial burglaries that ended after surveillance video from Table 44 caught images of him that were shared with the public.

Now, in addition to his initial charges, police have connected Huching to commercial burglaries going back months in the city.

The link to those incidents has resulted in five more counts of burglary, plus two counts of petit larceny, third or subsequent offense; two counts of grand larceny; eight misdemeanor counts of damaged property; and one count of possession of a firearm by a convicted felon.

Each burglary remains under investigation and Hutching is being held at Middle River Regional Jail without bond.

A Staunton man has been arrested for a string of commercial burglaries in the city.

According to the Staunton Police Department, after surveillance video was obtained of a burglary at Table 44 early in the morning of May 21, police were able to identify 29-year-old Aaron L. Hutching as the suspect.

On May 22, officers carried out a search warrant at a home in the 600 block of A St. and arrested Hutching without incident.

In their investigation, police linked Hutching not just to the burglaries and attempted burglaries reported on May 21, but a series from recent weeks.

He's accused of burglarizing:
• Lion's Den Tattoo on March 12
• D. Karrel, DMD, on May 12
• Staunton Dental Care, Terry Court Properties, and Select Physical Therapy on May 13
• A residence on May 17
• LSK Properties and Table 44 on May 20

Burglaries remain under investigation, and more charges may be filed.

Hutching is being held at Middle River Regional Jail without bond.

There's no word on whether police believe he may be connected to a similar string of burglaries in the Terry Court area in March.

Multiple commercial burglaries in the city of Staunton are under investigation after an apparent spree on the outskirts of the downtown area early Thursday morning.

According to the Staunton Police Department, on May 21, commercial burglaries were reported at LSK Properties, LLC at 630 Charles St. and Table 44 at 300 Church St Suite A.

Police say a man matching that description was seen in the area of W. Beverley St. and S. Waverly St. right around midnight.

All of the burglaries and attempted burglaries are under active investigation. Anyone with information about the crimes is asked to call either the Staunton Police Department at 540.332.3842 or Crimestoppers at 1.800.322.2017. Callers to Crimestoppers may remain anonymous and are eligible for cash rewards.

A night of peaceful rallies in Harrisonburg

Local colleges make statements on death of George Floyd, others

A night of peaceful rallies in Harrisonburg

Local colleges make statements on death of George Floyd, others