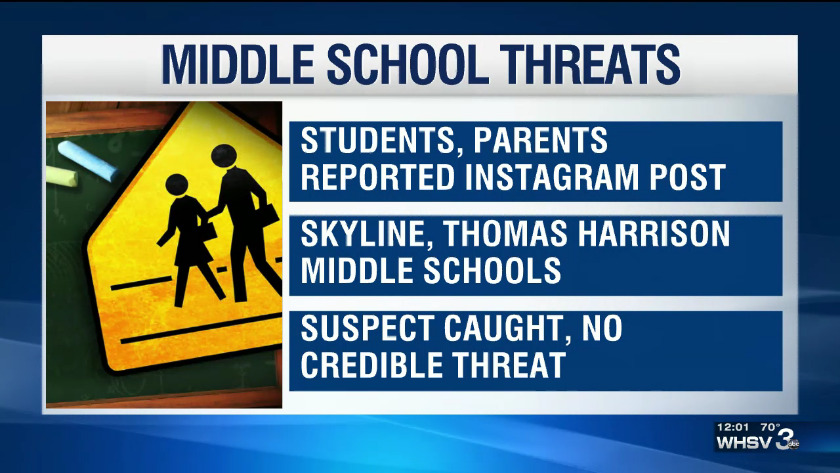 HARRISONBURG, Va. (WHSV) — A 13-year-old student has been charged with a felony for allegedly posting a threat to shoot up his Harrisonburg school on social media.

According to Corporal Scott Drugo, Harrisonburg Police spokesman, the boy, a student at Skyline Middle School, created a fake account on Instagram and then posted a photo of guns he found online along with a caption saying that he was going to carry out a school shooting at Skyline and Thomas Harrison Middle Schools.

Police say his intent was to scare his friends. It resulted in an increased police presence at the middle schools after school officials notified police on Monday. This falls into a pattern with threats that have been made to schools across the country after 17 people were killed in a high school shooting in Parkland, Florida last week.

Now, the student is charged with making threats to commit serious bodily harm to persons on school property, a class 6 felony punishable by one to five years in prison or up to 12 months in jail and a fine of $2,500.

Since he is a minor, his identity will not revealed by police.

Though this incident was a hoax, police encourage students, parents, and school staff to always report suspicious activity, including online posts through social media. Our local police departments work closely with the schools and take any type of threat seriously.

A social media post in which someone threatened to harm people at Skyline and Thomas Harrison Middle Schools has been determined to be a hoax.

That's according to Harrisonburg City Public Schools, who sent out an update to parents and staff Monday night, letting them know that the Harrisonburg Police Department "caught the person who posted the threat on Instagram."

They say there was no credible threat to the schools in the end, but thank police for their swift investigation to ensure the safety of students.

Police are investigating after an Instagram post threatened to harm Skyline and Thomas Harrison Middle Schools, according to Dr. Scott Kizner, the superintendent of Harrisonburg City Schools.

Kizner said police will have an increased presence at all of the schools after school officials notified the police department of the social media post on Monday night.

"I do want to thank the students who immediately told their parents and also contacted school personnel," said Kizner in a statement. "Please keep encouraging your children to report to a responsible adult anything that seems disturbing or threatening."

Kizner said students' safety is the top priority and school officials will continue to take every threat seriously.

Stay with WHSV News as this story continues to develop.