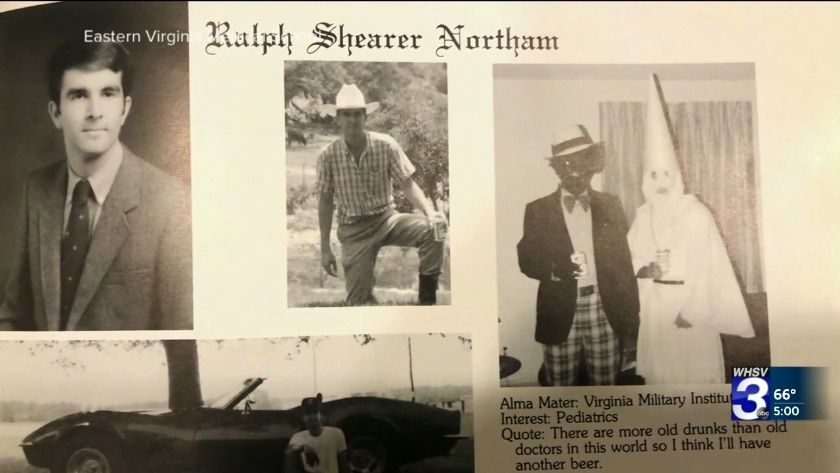 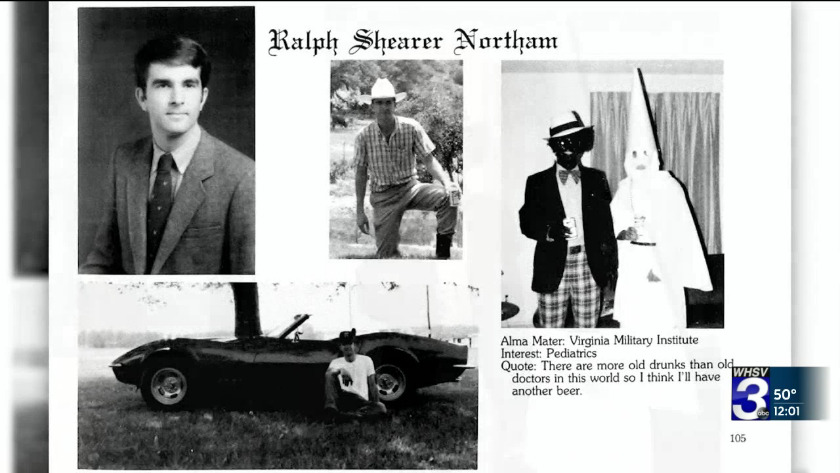 RICHMOND, VA (WWBT) — Dozens of protesters gathered outside the Governor’s Mansion on Monday morning calling on Gov. Ralph Northam to resign after racist photos emerged on his yearbook page from medical college.

Northam held a meeting with cabinet members Monday morning, and national media reported Northam told them he needed more time to decide on his future as governor.

Monday’s protests came the day after Northam called an “urgent meeting” with his staff members.

On Friday, Northam, a Democrat, had admitted to wearing a racist costume in a photo showing someone in blackface and another person in a KKK robe in a 1984 yearbook photo.

“I have spent the past year as your governor fighting for a Virginia that works better for all people. I am committed to continuing that fight through the remainder of my term,” Northam said a statement. "That photo and the racist and offensive attitudes it represents does not reflect that person I am today or the way I have conducted myself as a soldier, a doctor and a public servant. I’m deeply sorry.”

Then on Saturday, Northam said he wasn’t the person in the photo and called a press conference to address the issue.

In that press conference, Northam did admit that he had worn blackface for a Michael Jackson costume in a dance contest, though he reiterated the walked-back claim that he is not in the yearbook photo.

He said that Friday was the first time he saw the yearbook photo and he felt the need to apologize immediately before more carefully reviewing it.

“It hit me like a ton of bricks. Was totally caught off guard when I saw the picture,” Northam said Saturday.

House Speaker Kirk Cox said Monday morning that has he has no interest right now in taking an approach to impeach Northam.

“That’s a very high standard," he said. "And so I think that’s why we’ve called for resignation. We hope that’s what the governor does. I think that would obviously be less pain for everyone.”

On Saturday, Cox and House Republicans issued a statement that said Northam’s “ability to lead and govern is permanently impaired and the interests of the Commonwealth necessitate his resignation.”

There have been many other calls for Northam to resign, ranging from former Virginia governors to the Virginia Democratic Party to Richmond Mayor Levar Stoney.

Virginia Democrats posted to social media Saturday that “we made the decision to let Governor Northam do the correct thing and resign this morning - we have gotten word he will not do so.”

The College of William & Mary has said Northam is no longer welcome to Friday’s Charter Day events.

“It has become clear that the Governor’s presence would fundamentally disrupt the sense of campus unity we aspire to and hope for with this event,” said President Katherine A. Rowe. “We have conferred with the governor’s office, and he will not be part of Friday’s program.”

Rowe says the photos are “a painful reminder of the hate, divisiveness and racism that so many in this country have sought for generations to overcome. That behavior has no place in civil society – not 35 years ago, not today.”

Charter Day celebrates the school’s founding and this year includes the inauguration of Rowe, who joined the school in July.

“My thoughts are with the leaders of our Commonwealth as they seek the best path forward to rebuild trust,” Rowe said. “My focus, however, is on the William & Mary community: on reckoning with our own history with humility and dedication, and on joining you in the continuing work of ensuring our university community is welcoming and respectful of all.”

My statement with Senators @timkaine and @MarkWarner urging Governor Northam to resign. pic.twitter.com/caAx6Im0Ga

The photo that appeared in Northam’s 1984 medical school yearbook shows two people, one wearing blackface and one in a KKK outfit. A sign at this demonstration claims Northam was the man in blackface. Northam has said he is not either person. #RVAnews #VAnews pic.twitter.com/MCf8L8rbCJ

More than 5,000 COVID-19 patients have been discharged from Virginia hospitals

Dept. of Corrections says they've tested more than a 3rd of all inmates

More than 5,000 COVID-19 patients have been discharged from Virginia hospitals

Dept. of Corrections says they've tested more than a 3rd of all inmates