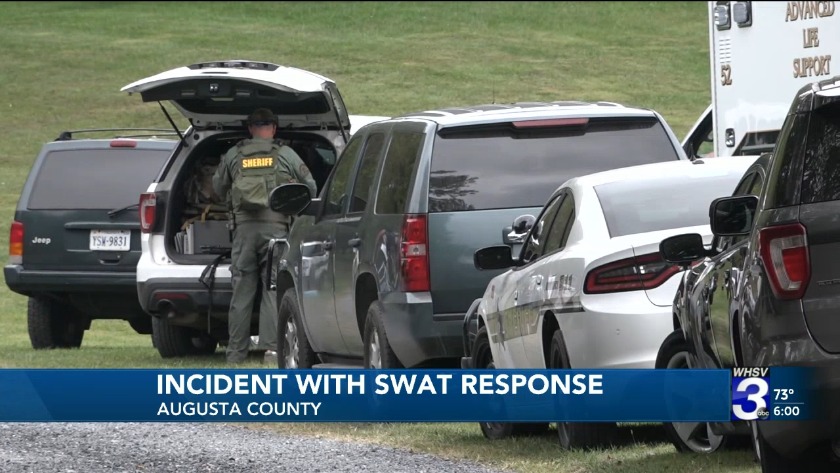 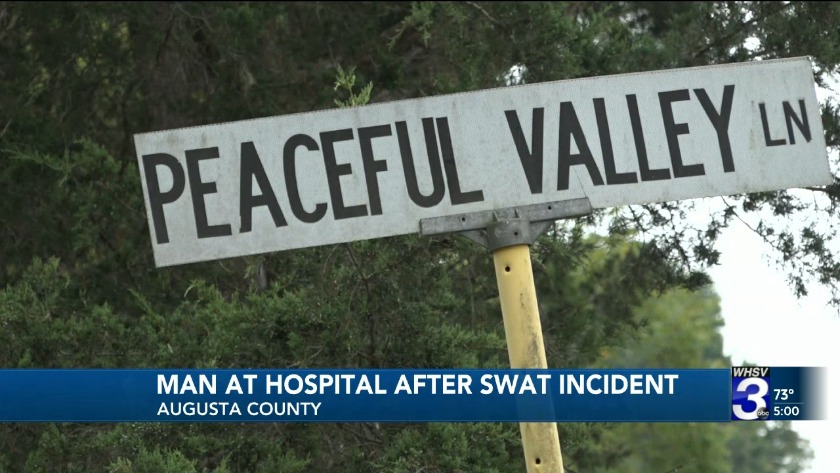 Photo of the scene by WHSV's Hannah Hall

The man who sparked a standoff involving a SWAT team and law enforcement from Augusta County and Staunton on Tuesday afternoon has been hospitalized.

According to the Augusta County Sheriff's Office, the man, who they say was intoxicated, was able to be apprehended without any injuries.

That followed a standoff of about four hours during which a SWAT team was called in and neighbors were told to stay in their homes.

It began at 10:42 a.m. when calls came in about a man yelling for help from a wooded area around Frog Pond Road and Peaceful Valley Lane.

Other callers reported the man making a range of incoherent sentences and some people said he could be armed with a gun.

Augusta County deputies secured a perimeter in the morning and established communication with the man as the 911 center used the Reverse 911 system to alert nearby homeowners of the situation.

A SWAT team, K-9 unit, the Staunton Police Department, and a drone were brought to the scene for backup as the standoff situation continued.

Deputies say due to the thick canopy of the wooded area, the drone proved to be ineffective.

Ultimately, the SWAT team and K-9 unit found the man unresponsive at 1:47 p.m.

Deputies have not identified the man at this point, but said he will be charged with public drunkenness. He was taken to a nearby hospital for treatment.

They said no weapon was recovered at the scene.

A large police presence is ongoing in Augusta County as law enforcement attempt to de-escalate a standoff situation Tuesday afternoon.

According to the Augusta County Sheriff's Office, neighbors in the area of Frog Pond Road and Peaceful Valley Lane, west of Staunton, called 911 after they witnessed a man outside screaming for help.

Deputies say they made contact with the man a little before 11 a.m. and he asked for help, but since then has been largely nonverbal and non-compliant.

They are approaching the situation as one involving mental illness.

According to Sheriff Donald Smith, after the individual threatened law enforcement, the sheriff's office called in a SWAT team and the Staunton Police Department. Deputies also have their drone on scene to monitor the situation from above.

Witnesses in the area said that rescue squads from Staunton and Augusta County, as well as the Swoope Fire Department, are also on scene.

They told WHSV that nearby homeowners have been told to stay indoors.

No other information has been provided by law enforcement. This is a developing story. Stay with WHSV for updates.