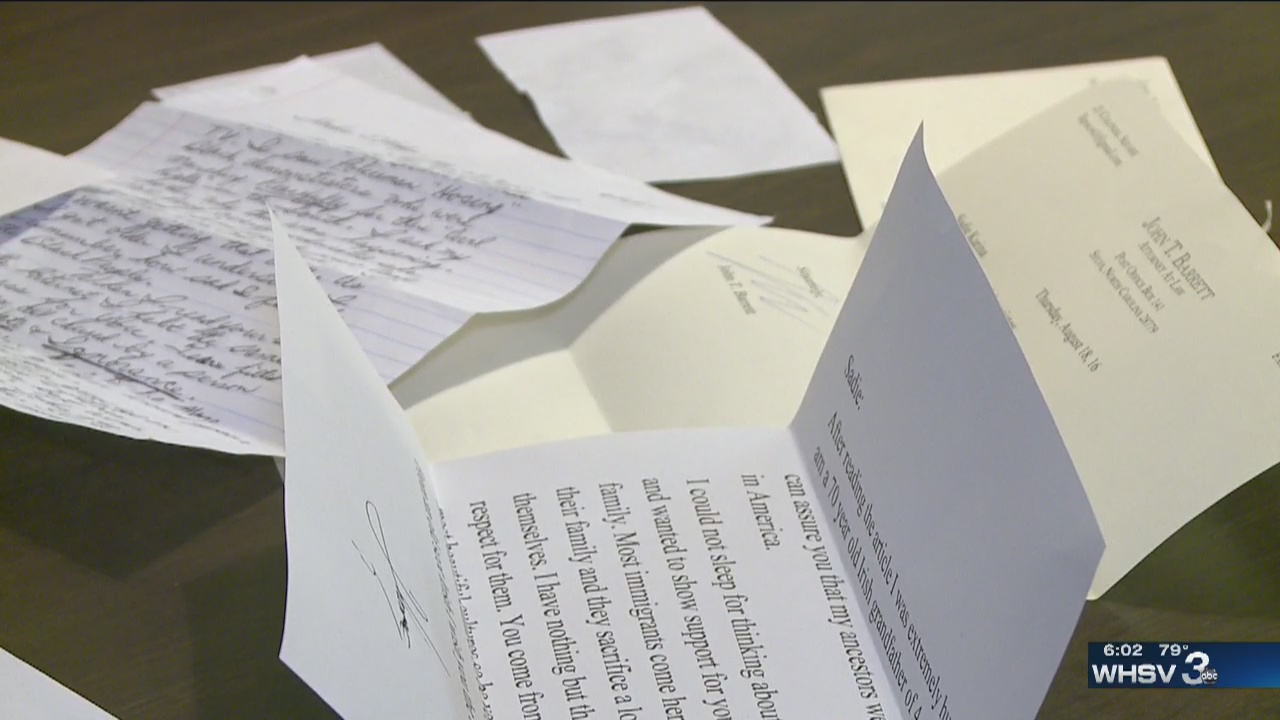 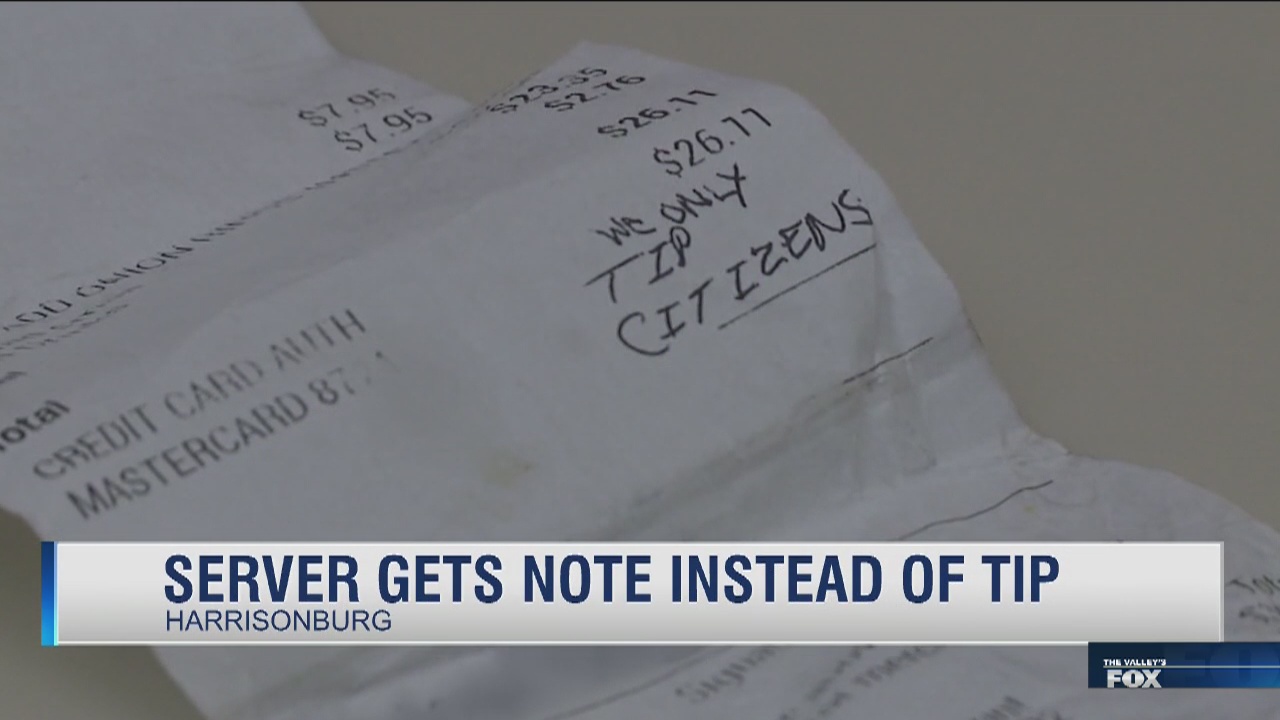 Server Gets Note Instead of Tip 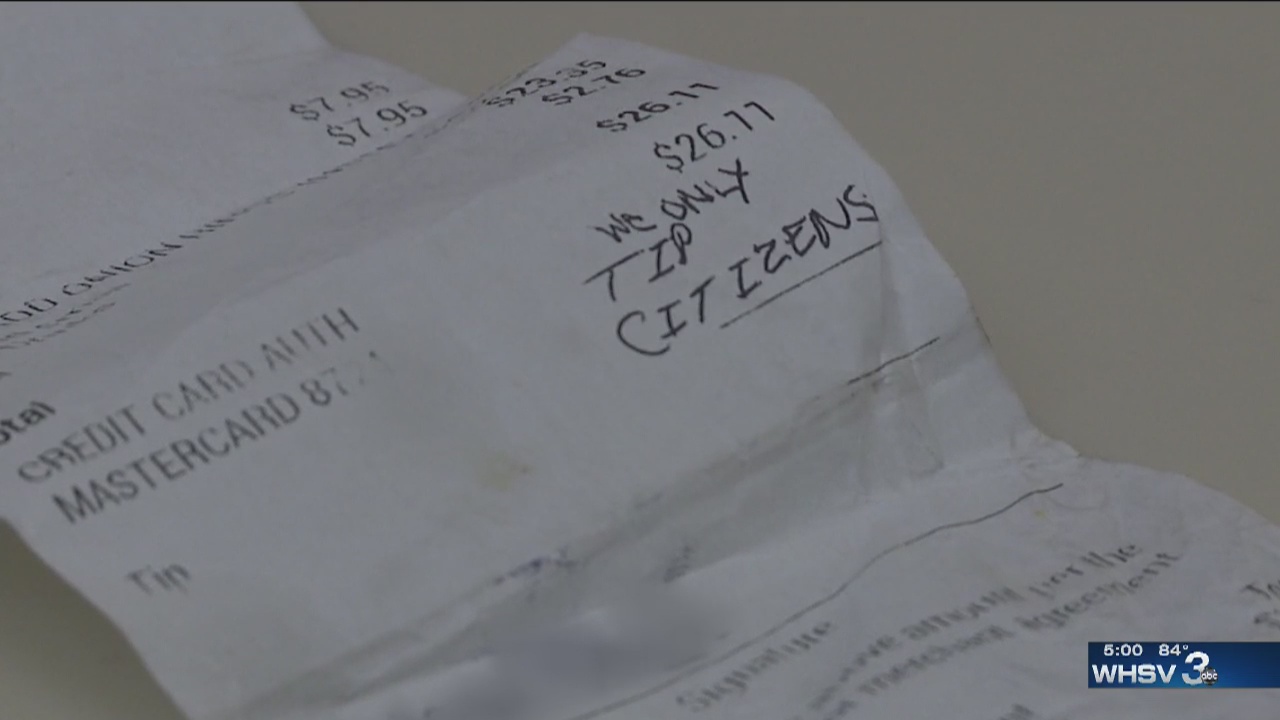 A woman who identifies herself as the woman shown in the above surveillance video has now contacted WHSV. She denies any involvement in the note written on the receipt.

Many people throughout the Valley and nationwide have expressed outrage after a Valley server got what she calls a "nasty and racist" comment on a receipt. And the entire exchange was caught on surveillance camera.

Now, the owner of the restaurant says she doesn't want the person responsible back in her business.

On Monday, August 15, Sadie Elledge served a man and woman two gyros, sodas, and a Greek salad at Jess' Lunch in downtown Harrisonburg. From the start, Elledge says she felt uncomfortable.

"They wouldn't talk to me. They would just nod their heads," said Elledge.

As the blonde woman signed the receipt (which you can see in the video above), she left no tip. That's not unusual for any server, but the reason why she didn't leave the tip was something Elledge says she has never seen.

The receipt reads: "We only tip citizens."

"It shouldn't even matter, I just feel like it's rude and disrespectful. I've never met, I've never done anything to them," Elledge said.

It wasn't just disrespectful, but she says it is just plain wrong.

"I was born here but I'm Mexican and Honduran," said Elledge.

Elledge is an American citizen, as are her family members.

Adding another layer to her disbelief, Elledge says the woman herself had an accent.

Jess' Lunch is an immigrant-created and owned business. Here's what Elledge's boss had to say about the note.

"Coward is the word to describe what they did. I have worse words to use," said Angeliki Floros. "But let's go with coward."

Harrisonburg is called the 'Friendly City' for a reason, as could be seen this morning. Elledge got a letter from some downtown neighbors, who covered the tip and then some

Tapping into the same spirit of being a friendly neighbor, Elledge says she would serve them again.

"It makes me the stronger person to not let these things bother me because I know I'm a good person. I know that," said Elledge.

Meanwhile, the owner of Jess' Lunch is not sold. She wants an apology for Elledge.

"I would like for them to not come here unless they regret what they did," said Floros.

WHSV is aware of the person who allegedly left that note. We have reached out to both the woman and man shown in surveillance video, repeatedly, to provide an opportunity to speak out if they, as some claims have appeared online, did not write the note. However, the couple has declined to go on camera to provide their side of the story.

The name on the receipt has been blurred in the video above, as has the face of the woman in the video. Only if they come forward to speak, will WHSV reveal their identities.

Meals on Wheels preps for heat

Meals on Wheels preps for heat