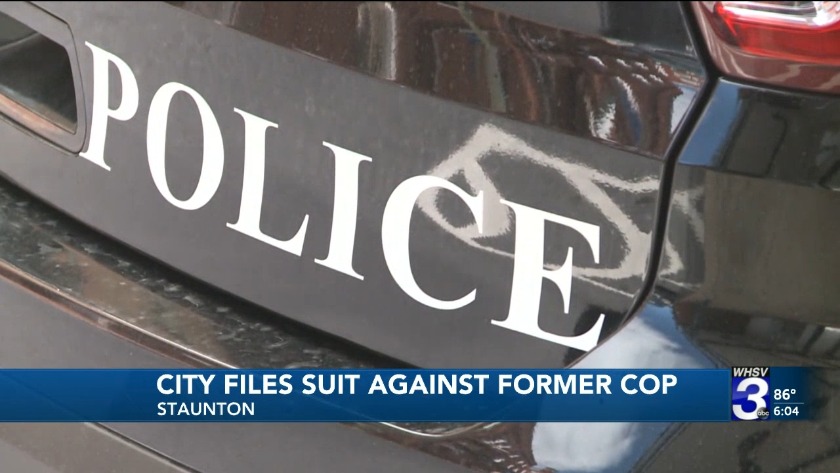 STAUNTON, Va. (WHSV) — The City of Staunton filed a lawsuit against a former cop over a claim she broke a written contract by resigning from the police department early, court documents show.

In the filing, the city argued it is entitled to $4,000 after Carter Thompson left the force in March 2018, around a year after she finished training to become a certified officer. Under the contract signed by Thompson, however, the city estimated the value of the training to be much more — $17,794.08.

Thompson also agreed in the contract to work for the city for three years after her hiring, court documents show.

The city also said in November 2018, less than a year after her resignation, officials learned Thompson planned to take a position with the Staunton Sheriff's Office.

In addition, the filing claimed Thompson "worked on patrol merely 7% of the total time" she was employed.

Staunton argued in the filing it went beyond its obligations in the contract, including allowing Thompson to re-test to become a certified officer after she failed at first, giving her "light-duty assignments yet paying her at the police officer's rate of pay," granting her "generous" paid leave and making "repeated efforts to work with her on her contractual obligations."

The city also provided evidence of several occasions when officials attempted to reach out to Thompson before the suit was filed.

WHSV attempted to reach out to Thomas Weidner IV, PLCC, which is listed as representing Thompson, on Monday and did not hear back by the time this article was published.

Ruth Jones Turner, a Staunton spokesperson, said while the city does not discuss pending litigation, the police instituted contracts about 11 years ago.

In addition, Jones Turner referenced an article by The Northern Virginia Daily regarding a deputy who the publication reported was ordered by a judge to pay training costs because she resigned before the end of her contract.