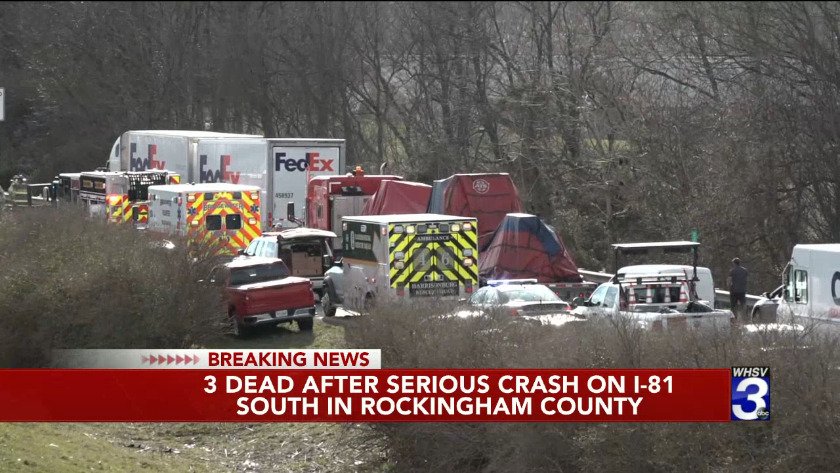 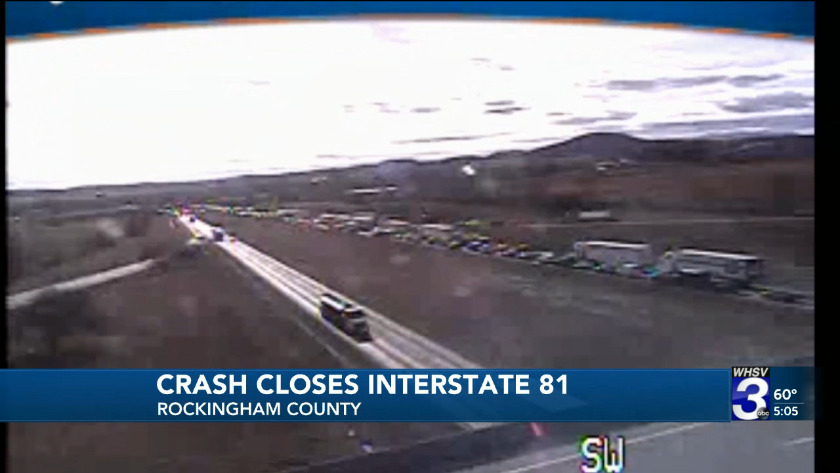 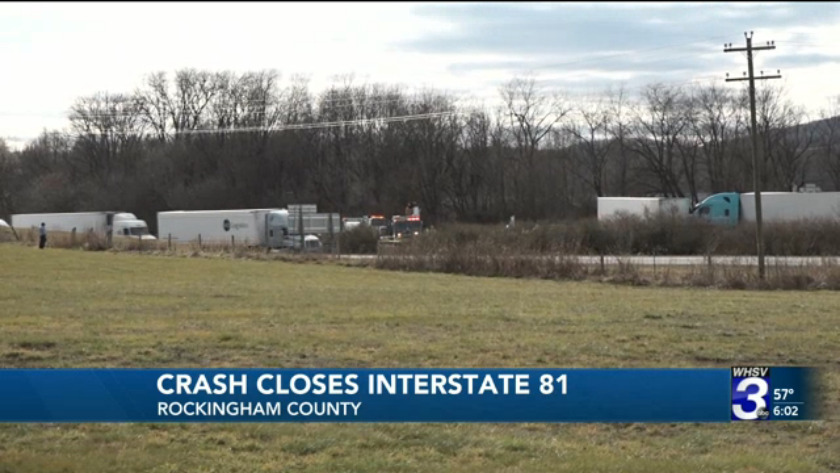 Six people sent to Sentara RMH after I-81 crash

Virginia State Police have identified the three people who were killed in a multi-vehicle crash along Interstate 81 on Wednesday afternoon.

The crash shut down all southbound lanes of I-81 near Mount Crawford for the entire afternoon, resulting in backups and extreme congestion on Route 11.

According to police, a 2016 Volvo tractor trailer driven by 52-year-old William A. Milam, of Jamestown, Tennessee, was heading north on Interstate 81 when it ran off the left side of the roadway, through the interstate median, into southbound lanes, and and crashed head-on into a southbound 2013 Honda Civic and a 2012 Ford E-450.

Police say the impact of the crash caused a southbound 2003 Honda Element to then crash into the Ford and the Volvo's trailer hit a southbound 2016 Freightliner tractor trailer as well.

Milam died at the scene as a result of his injuries.

The driver of the Honda Civic, 33-year-old Dylan P. Snell, of Clemmons, North Carolina, and the driver of the Ford E-450, 41-year-old Robert W. Fitzgerald, of Crimora, Virginia, died at the scene as well.

All of them were wearing their seat belts.

Police say a 32-year-old man who was a passenger in the Ford driven by Fitzgerald was taken to Sentara RMH with serious injuries.

The driver of the Freightliner, a 40-year-old man from Florence, New Jersey, suffered minor injuries as well.

Everyone involved was wearing a seat belt.

Virginia State Police confirmed three people were killed in a crash on Interstate 81 South in Rockingham County on Wednesday.

According to the Virginia Department of Transportation (VDOT), the crash involved two tractor trailers, a cargo van and two passenger vehicles. The crash blocked traffic at mile marker 239.7, just south of Exit 240 for Bridgewater and Mount Crawford. It was first reported around 2:00 p.m on Wednesday. All lanes of the interstate reopened to traffic around 9:00 p.m.

The drivers of the Volvo, Honda Civic and the Ford were killed as a result of the crash.

The passenger of the Ford, a 32-year-old man, suffered serious injuries.

The 21-year-old man driving the Honda Element was from Stephens City. He and his passenger suffered minor injuries.

As of Wednesday night, State Police did not identify the drivers killed in the crash pending family notification.

The southbound lanes of the interstate were closed for several hours on Wednesday. Backups from the scene at one point reached seven miles.

Those injured in the crash were taken to Sentara RHM. The hospital opened a family assistance center, inviting visitors and family members of crash victims to report to the hospital's main lobby for assistance.

VDOT is reporting about 7 miles of back-up on I-81 SB. There is a detour, but it would be best to get off before Harrisonburg, if possible. There are delays on Rt. 11 SB as well. If you’re heading north on 81, there’s about 2.5 miles of delays just ahead of the Mt. Crawford exit pic.twitter.com/5JxxPEG55N

Jan. 15, 5:00 p.m. Update: Sentara RMH is currently treating six patients from today’s crash on I-81. All are in stable condition.

Sentara RMH is responding to a crash on Interstate 81 this afternoon. A family assistance center has been opened. Visitors and family members may report to the main lobby for assistance.