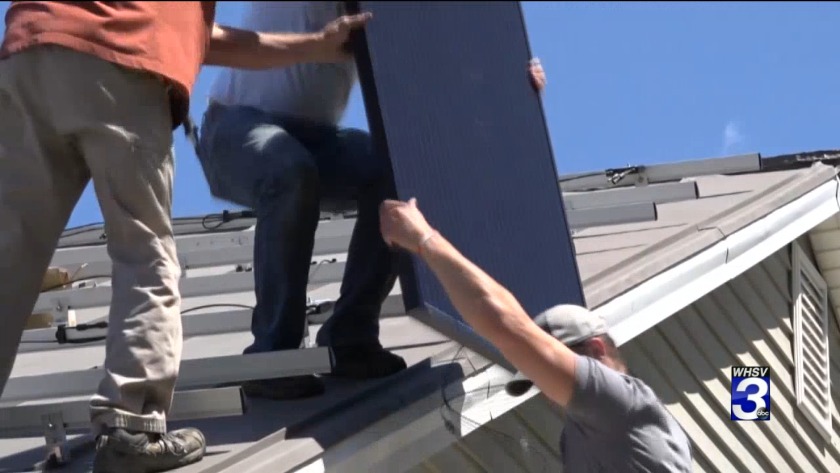 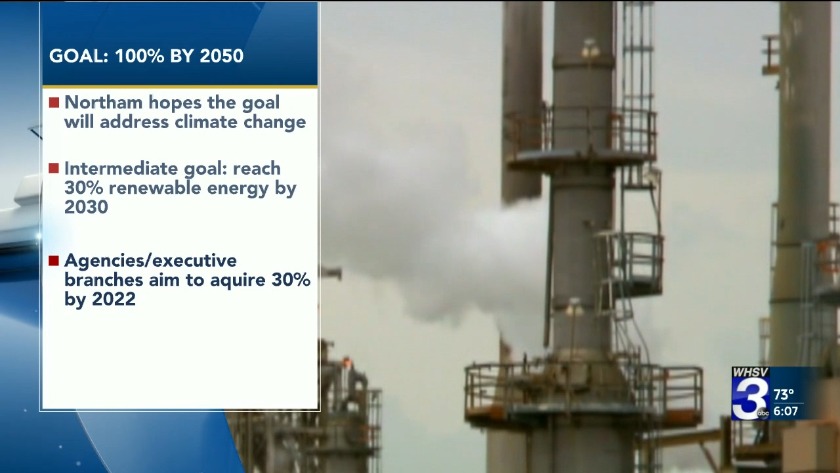 RICHMOND, Va. (AP) — Virginia Gov. Ralph Northam announced Tuesday he signed an executive order setting a goal for the state to produce 100% of its electricity from carbon-free sources by 2050.

Governor Northam visiting workers at Howell Metal, a copper tubing manufacturer in New Market, to announce an expansion in August 2019.

Such a shift will help address climate change, a challenge that "poses potentially devastating risk to Virginia," the order said.

The order from Northam, a Democrat, directs the leaders of several state agencies to develop a plan by next summer for meeting the goal. It sets an intermediate goal of powering 30% of the state's electric system by 2030 and says the Commonwealth's agencies and executive branch will aim to procure at least 30% of their electricity from renewable resources by 2022.

Most U.S. states have either binding renewable portfolio standards or nonbinding goals, according to the federal Energy Information Administration .

Some states' goals are more aggressive than the voluntary goal Virginia enacted in 2007 or what Northam called for Tuesday. For example, New York Gov. Andrew Cuomo signed legislation in July mandating 100% carbon-free electricity by 2040 and requiring greenhouse gas emissions be cut by 85% below 1990 levels by 2050.

Ivy Main, a former Environmental Protection Agency attorney who now works as a writer and consultant on clean energy policy, said that while procuring more electricity from renewables for state offices is doable through executive order, other parts of Northam's order would need legislation to support them.

Virginia's Republican-controlled General Assembly has previously thwarted attempts to limit carbon emissions from power plants. Control of both the House and Senate are up for grabs in November's elections.

The state's largest electric power producers, Dominion Energy and Appalachian Power, said they were willing to work with the administration on the proposal.

"Governor Northam's announcement today shows real leadership on climate change in the face of its absence at the federal level," said Will Cleveland, senior attorney at the Southern Environmental Law Center.

But others said the order didn't go far enough and suggested the state's sign-offs on two major natural gas infrastructure projects currently under development were at odds with the goals of the executive order.

"If we are going to solve the climate crisis, we cannot continue supporting and investing in proposed fracked-gas pipelines like the Atlantic Coast and Mountain Valley pipelines. One place to start would be directing his Department of Environmental Quality to issue stop-work orders for those projects," Harrison Wallace, Virginia Director of the Chesapeake Climate Action Network, said in a statement.

Dominion is the lead developer of the Atlantic Coast Pipeline, an approximately $7 billion project the company says will help its transition away from coal.

"ACP is needed more than ever to ensure electric reliability, home heating, and manufacturing," Cannon said.

Below is the full release from Northam's office:

During the inaugural Virginia Clean Energy Summit this morning, Governor Northam announced Executive Order Forty-Three, an ambitious plan to expand renewable energy in the commonwealth and address the climate crisis. In addition to establishing energy efficiency requirements on state buildings and a goal for 30% of Virginia’s energy to be powered by renewable sources by 2030, EO Forty-Three sets Virginia on the path to zero carbon pollution by 2050. Most important, the executive order ties plans for clean energy to jobs, focused on pathways out of poverty.

While the plan to meet the goals laid out by Governor Northam will not be finalized until July 1, 2020, there will be steps towards the transition that go into effect almost immediately. This includes: DMME initiating a competitive power purchase agreement for distributed solar, state agencies and universities looking at their energy consumption and implementing energy efficiency, and 3000 MW of wind and solar development by 2022.