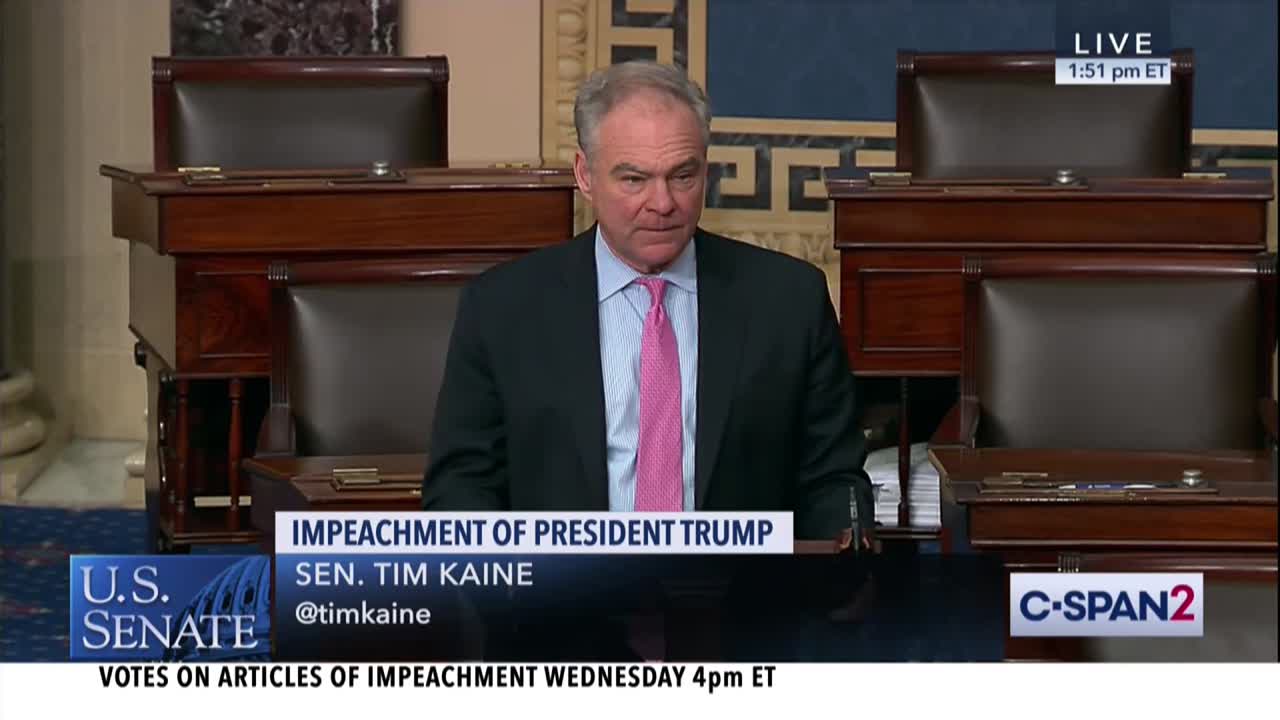 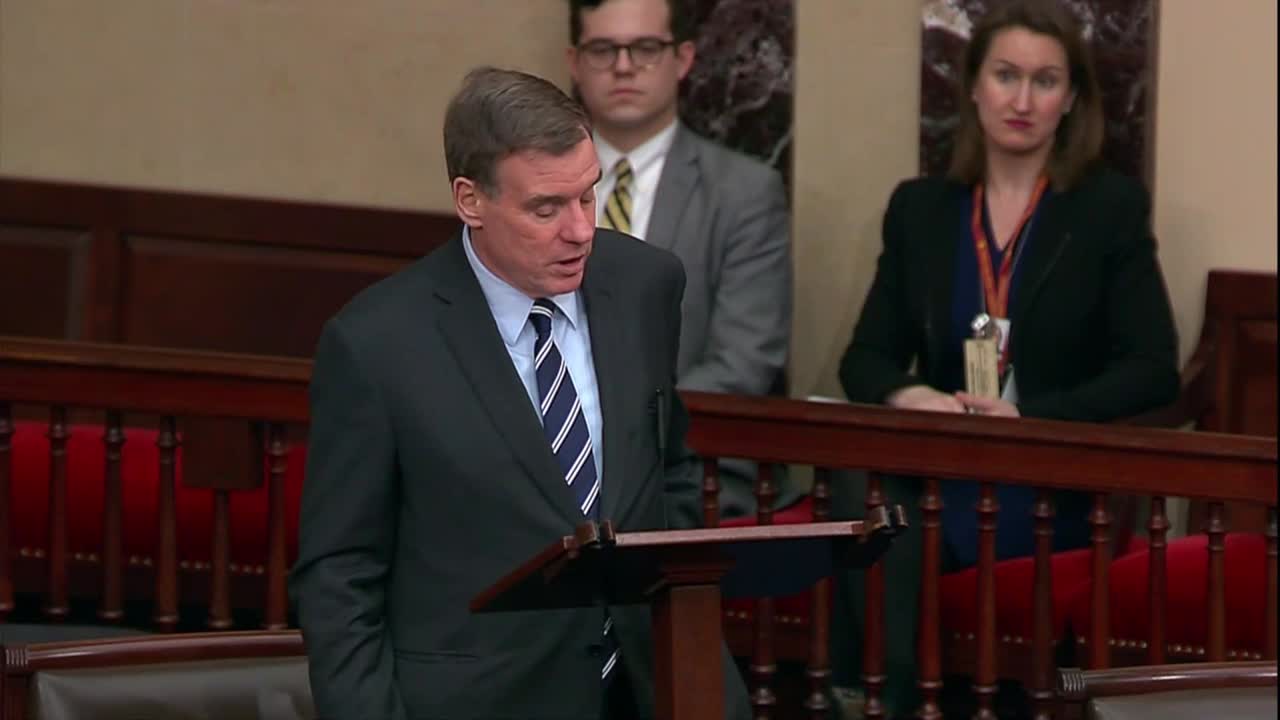 WASHINGTON (WHSV) — Virginia's two U.S. senators, Tim Kaine and Mark Warner, both Democrats, announced on Tuesday that they will vote in favor of the two articles of impeachment against President Trump when votes are cast on Wednesday.

They joined other Democrats in what, so far, have been announcements of votes on strict party lines in the Senate.

“Unchallenged evil spreads like a virus," Kaine said on the Senate floor. "We have allowed a toxic President to infect the Senate and warp its behavior. And now the Senate’s refusal to allow a fair trial threatens to spread a broader public anxiety about whether ‘impartial justice’ is a hollow fiction. An acquittal will lead to worse conduct. I will not be part of this continual degradation of public trust. Thus, I will vote to convict."

“The allegations against the President are grave," Warner said. "The House managers presented a compelling case based on the testimony of more than a dozen witnesses—Trump political appointees and career public servants who had the courage to speak truth to power. Their testimony, and the House managers’ case, present a clear fact pattern that even many of my Republican colleagues acknowledge is true. This evidence reflects a corrupt scheme to solicit foreign interference in support of the President’s re-election.”

President Trump schemed to get Ukraine to help him win the 2020 election by strong-arming its new President to announce a bogus investigation against a political opponent. To carry out his scheme, he smeared, fired and threatened a dedicated career ambassador, thwarted Congress by secretly withholding appropriated military aid over the advice of his national security team, violated two laws in order to hide his actions, outsourced critical foreign policy to a rogue private attorney, hurt an American ally, gratified an adversary and overturned longstanding precedent regarding the relationship between the executive and legislative branches. The scheme was so repellent that numerous members of his own Administration fought against it and then, when they could not stop it themselves, courageously brought it to light.

The House Managers have proven both articles of impeachment. But I have struggled during the Senate process—which cannot be called a trial due to the shocking refusal to allow key witnesses and documents—with a basic question. Is it an abuse of trust for a President to behave exactly as expected? President Trump’s behavior has been appalling. But it has not been a surprise.

The American public knew that Donald Trump would seek foreign help to win an election. He publicly did so in 2016 by appealing to Russia for help at the same time as the Chairman of our Joint Chiefs of Staff said Russia was America’s chief adversary. That he is doing so again is no surprise.

The American public knew that Donald Trump would target political opponents with false attacks. He publicly did so in 2016 by leading crowds in chants of “lock her up.” That he will again target perceived opponents—Democrats or Republicans, Ambassadors or whistleblowers, Representatives or Senators—is no surprise.

The American public knew that Donald Trump would obstruct the release of information. He publicly did so in 2016 when he violated long-standing practice by refusing to release his tax returns. That he will continue to obstruct Congress, the media and the American public is no surprise.

The Senate impeachment process answered my question. In 1974, Senators of both parties were willing to condemn extreme Presidential misconduct. In 1999, Senators of both parties were able to distinguish between unacceptable personal behavior and “high crimes and misdemeanors.” But in 2020, the Senate majority engineered an effort to conceal the truth rather than find the truth. Some described their motives as “let the people decide”—even as they voted to hide critical evidence from the American people.

While the President’s actions have not been surprising, the Senate’s capitulation has surprised me. And last Friday, as the majority repeatedly blocked the effort to consider witnesses and documents, I had a sad epiphany.

Unchallenged evil spreads like a virus. We have allowed a toxic President to infect the Senate and warp its behavior. And now the Senate’s refusal to allow a fair trial threatens to spread a broader public anxiety about whether “impartial justice” is a hollow fiction. An acquittal will lead to worse conduct. I will not be part of this continual degradation of public trust. Thus, I will vote to convict.

An acquittal will, however, underscore a higher principle. The removal of a man will not remove the moral void he exemplifies. Instead, everyday people of good will must engage as never before and show, to ourselves and to the world, that Americans still have the capacity to choose right over wrong, service over self, fact over fiction and decency over malice.

Madam President: I want to begin my remarks the way we began this trial: with the oath we each took to do impartial justice. Now, any other day we walk into this chamber as Republicans and Democrats. But in this trial, we have a much greater responsibility.

The allegations against the President are grave. The House managers presented a compelling case based on the testimony of more than a dozen witnesses—Trump political appointees and career public servants who had the courage to speak truth to power. Their testimony, and the House managers’ case, present a clear fact pattern that even many of my Republican colleagues acknowledge is true. This evidence reflects a corrupt scheme to solicit foreign interference in support of the President’s re-election. The President both unlawfully withheld aid to an ally at war with Russia and he withheld a White House meeting that would have strengthened our relationship with the democratically elected leader of Ukraine—a leader that was trying to prevent further Russian occupation of his country. The President used these powerful tools of American foreign policy as leverage to secure investigations into a political opponent as well as the “Crowdstrike” conspiracy theory— the notion that has been repeatedly debunked by our intelligence agencies that it was Ukraine, not Russia, that attacked our democracy in 2016.

Since this information came to light, the President has attempted to confound the House of Representatives’ constitutional role in the impeachment process. The White House issued a blanket refusal to provide any witnesses or documents, without any historical precedent or sound legal argument to support this position. For this reason, President Trump is also charged with obstruction of Congress.

Frankly, I understand some of the points the President’s defense team has raised concerning this second article of impeachment. There are legitimate questions to consider about executive privilege and separation of powers. But we cannot accept the “absolute immunity” argument this White House has invented. This absolute stance and the evidence we’ve seen about the President’s corrupt actions and intentions do not reflect a principled, good-faith defense of executive privilege. Rather it suggests an effort to deny Congress its Constitutional authority to investigate Presidential wrongdoing and, ultimately, to prevent exposure of the President’s conduct.

In reviewing this evidence, I have stuck to my oath of impartiality. I have tried to keep an open mind about what witnesses like John Bolton and Mick Mulvaney—people who were in the room with the President—could tell us. If anyone can provide new information that further explains the President’s actions, it is them. But I don’t see how the White House’s desperate efforts to block witnesses is anything but an admission that what they'd say under oath would not be good for this President. And I am deeply disappointed that the Senate could not achieve the majority necessary for a full, fair trial.

The defense of the President that we are left with is thin, legalistic, and frankly cynical. Instead of disputing the core facts, which are damning on their own terms, the President’s lawyers have resorted to remarkable legal gymnastics: The notion that even if the President did what he’s accused of, abuse of power is not impeachable. That foreign election interference is not a crime. That even calling witnesses to seek the truth about the President’s actions and motivations might somehow endanger the republic.

When Professor Dershowitz made his bizarre argument that abusing Presidential power to aid your reelection cannot be impeachable if you believe your own election to be in the national interest, I paid close attention—closer attention than I probably paid when I took his class back in 1977. But you don’t need a Harvard Law degree to understand what nonsense that argument is and where it could take us if followed to its logical conclusion. The framers wrote impeachment into the Constitution precisely because they were worried about the abuse of Presidential power. And if an abuse of power is what the framers had in mind when they crafted impeachment, then the two questions remaining in our deliberations are simple: did President Trump abuse his power and should he be removed from office?

The House managers have presented a compelling case that the President did pressure Ukraine to announce politically motivated investigations. A number of my Republican colleagues have acknowledged these facts acknowledged that what the President did was wrong. And frankly, it is clear why he did it. Does anyone here honestly believe Donald Trump wanted an investigation into the Bidens for any other reason than to damage Joe Biden politically and therefore aid in his own reelection? Time and again, the President has shown a willingness to attack anyone who stands in his way—Republicans, Democrats, members of his staff, members of this body. No one is off-limits. There is nothing out of character about this President using every available tool to damage an opponent regardless of their political party. I don’t fault the President for his unorthodox style. That is not an impeachable offense. The long list of things I disagree about with this President are not impeachable offenses, either. But the Constitution draws a line that is much clearer than the President’s lawyers have tried to argue.

The President crossed it. He abused his power. He commandeered America’s foreign policy not to advance America’s interests but to advance Donald Trump’s political interests. And despite his efforts to cover it up, he got caught. Now each one of us must vote: guilty or not guilty.

I will vote to convict the President because I swore an oath to do impartial justice and the evidence proves the charges against him are true. There must be consequences for abusing the power of the Presidency to solicit foreign interference in our election. If the Senate fails to hold him accountable we will be setting a dangerous precedent. We will be giving the green light to foreign adversaries and future presidents that this is okay. I will vote to convict the President because it is the Senate's constitutional responsibility to uphold this bedrock American principle: that no one is above the law, not even the President, and especially not the President.

Largest gathering of conservatives in the U.S. kicks off Wednesday

Bloomberg to speak to Virginia Democrats

Largest gathering of conservatives in the U.S. kicks off Wednesday

Bloomberg to speak to Virginia Democrats