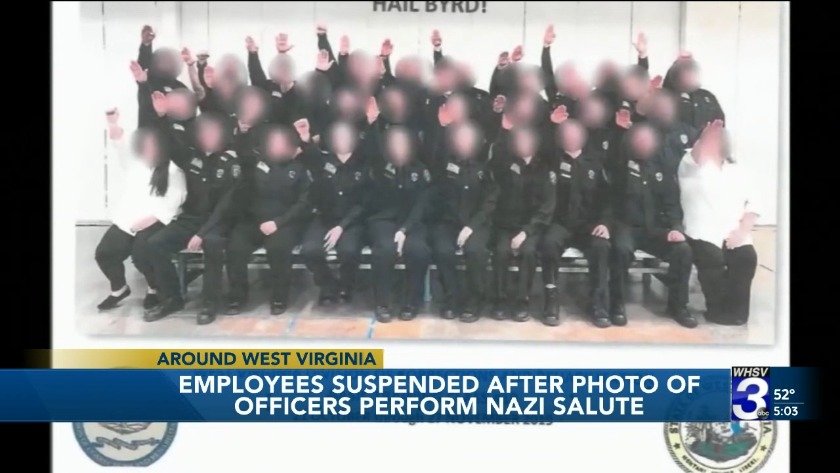 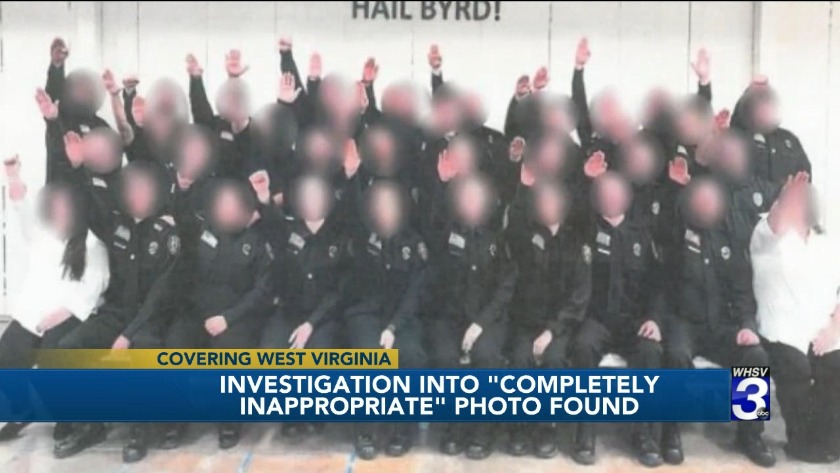 An investigation is underway after a "completely inappropriate" photo was found by members of the Department of Military Affairs and Public Safety. (DMAPS/DCR)

Three people have been fired and 34 remain suspended without pay after a "completely inappropriate" photo was found by members of the West Virginia Department of Military Affairs and Public Safety (DMAPS).

According to Secretary Jeff Sandy, the West Virginia Department of Military Affairs and Public Safety and its Division of Corrections and Rehabilitation are working to complete the investigation into a photo of a training class giving a Nazi salute.

Two correctional academy trainers and one of the Basic Training Class #18 cadets in the photo were terminated, according to DMAPS. The remaining trainees remain suspended without pay.

Investigators have conducted more than 50 interviews at the Glenville academy and other facilities.

Sandy, DCR Commissioner Betsy Jividen and their leadership teams have been reviewing the statements and other evidence throughout the investigation.

Sandy says he estimates the investigation is nearing completion.

Sandy cautioned until the investigation is complete, the release of specifics like names and disciplinary status of individuals in the photo, as well as an unredacted version of it, remains pending. This is due to personnel rules and protections outlined in West Virginia's civil service system.

“We are committed to a full and complete investigation that we will present to Governor Justice and to the public once it is finished,” Sandy said. “As terrible as this incident has been, it is critically important that we go by the book to arrive at the whole truth of what occurred and why.”

Sandy informed all DCR employees on Wednesday of the ongoing investigation and had faith and community leaders briefed as well.

“I remain outraged by this incident, as does Gov. Justice, Commissioner Jividen, and the rest of the DMAPS and DCR team,” Sandy said. “I cannot stress enough how this betrays the high standards and professionalism of the men and women of corrections, who successfully carry out their vital and daunting public safety mission every day and around the clock.”

The memo can be found here.

A photo of West Virginia corrections trainees was so disturbing that some employees have been suspended and the governor has ordered some to be fired.

An investigation is underway after a "completely inappropriate" photo was found by members of the state's Department of Military Affairs and Public Safety.

The photo of Basic Training Class Number 18 has been deemed "hurtful, disturbing, and highly insensitive" by DMAPS Cabinet Secretary Jeff Sandy in a memo that state officials made public Thursday.

The letter, sent by Sandy to the agency's Division of Corrections and Rehabilitation on Wednesday, didn't initially make clear what the image showed, but the photo, with faces blurred, was later released by the department.

It shows corrections officer trainees all doing a Nazi salute.

Sandy described the photo of Basic Training Class Number 18 as “distasteful, hurtful, disturbing, highly insensitive, and completely inappropriate." He wrote that the picture “betrays the professionalism I have seen time and time again displayed and practiced by our brave correctional employees.”

A number of employees have been suspended during the investigation.

Commissioner Jividen directed all copies be destroyed to "keep its harm of spreading" and to "preserve high standards and professionalism of the Division of Corrections and Rehabilitation and the Department of Military Affairs and Public Safety."

Governor Jim Justice has called for the firing of those involved in the picture.

“I condemn the photo of Basic Training Class #18 in the strongest possible terms,” Gov. Justice said. “I have directed Secretary Jeff Sandy of the Dept. of Military Affairs and Public Safety to continue actively investigating this incident and I have ordered the termination of all those that are found to be involved in this conduct. This will not be tolerated on my watch – within the Division of Corrections and Rehabilitation – or within any agency of state government.”