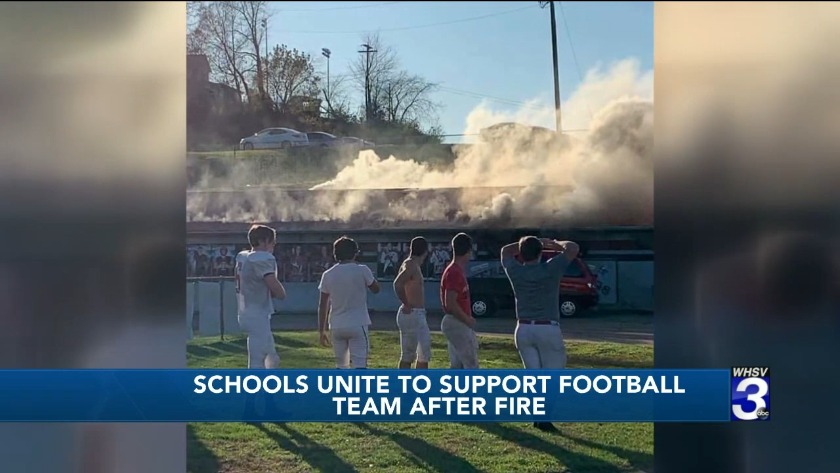 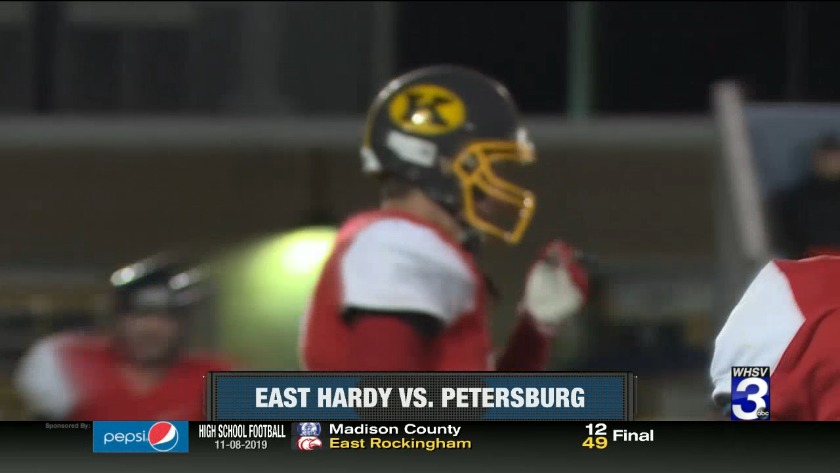 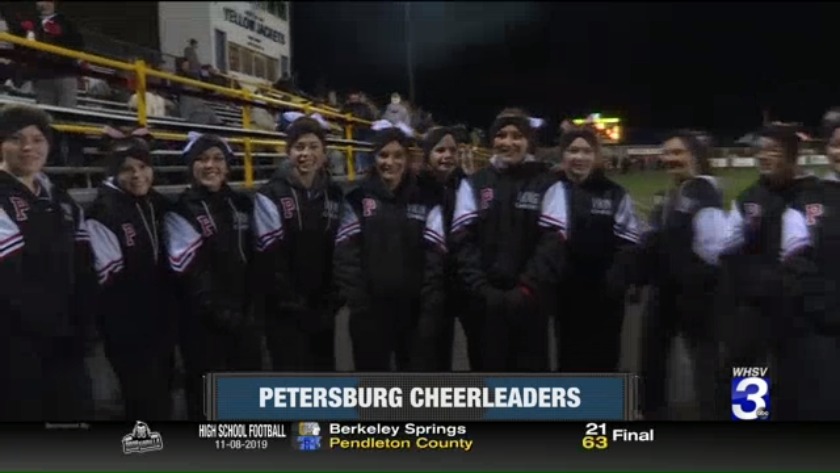 PETERSBURG, W.Va. (WHSV) — After an accidental fire destroyed a West Virginia high school's field house at their football field, other schools and teams from around the area have rallied to their support.

The Petersburg Vikings huddle during Week 8 of the high school football season at a home game against Frankfort | Photo credit: WHSV

On Wednesday, Nov. 7, Petersburg High School officials say the team was in the field house beside their field when a case of spray paint cans tipped over, sending one paint can on a collision course with a gas furnace, igniting its fumes.

From there, the fire spread rapidly, with other paint cans exploding, causing it to continue to accelerate.

The team, which was in the process of getting changed for practice in the locker rooms - which are also part of the building - escaped out onto the field.

Everyone made it out unhurt. But the school's concession stand, locker room, and bathrooms were destroyed in the fire, as was a lot of equipment for the team, including helmets, pads, and more.

The Petersburg and Maysville fire departments quickly extinguished the fire, but it had spread too rapidly to stop those losses.

This coming Friday was scheduled to be the high school's senior night and the final game of high school football in the regular season.

With the school facing the final week of their season without equipment and without facilities for a home game, other schools around the area – including rivals and their scheduled opponents for this Friday – stepped up to provide.

Sean Biser, the head coach for Keyser High School, donated helmets, shoulder pads, and other equipment for the Petersburg team to be able to finish their season strong.

Matt Altabello, the head coach for Moorefield High School, offered up their school's football field for the game to be played. Moorefield has a bye week for their final week, and that's where Petersburg's final game of the season will be played.

But East Hardy High School, who Petersburg is playing this week, offered their field too, saying that they would be "willing to wear white on our own field" to let Petersburg use their facility as their own.

"Anything we can, we are willing," said East Hardy Coach Devon Ordndorff.

"We have received so much support from locals and people and coaches across the state," said Coach Denver Riggleman in a Facebook post. "I've always said if there is ever a disaster or someone in need, the people of this great state are always there to help. We the coaches and players thank you for your concerns and prayers. May God bless you all."

QH Design, a business in the Petersburg community, also posted to social media that they are selling Petersburg Viking decals with "Viking Strong" and giving all proceeds to the Petersburg football program.

In addition, schools from all over West Virginia and even Maryland and Ohio have reached out to offer support to the school.

"We are West Virginians. When tragedy strikes, we are there to support our fellow Mountaineers. We have seen true sportsmanship and compassion from area teams lending a hand to PHS Football after today's field house fire," stated Hardy County Sports on Twitter.

We are West Virginians. When tragedy strikes, we are there to support our fellow Mountaineers. We have seen true sportsmanship and compassion from area teams lending a hand to PHS Football after today's field house fire @PetersburgHS @KeyserHigh @moorefieldhs @NesselrodtEHHS

The game will be played at Moorefield at 7 p.m. with Senior Night recognition starting at 6 p.m.

Grant County Schools offered thanks to everyone who offered their help, including Moorefield High School and East Hardy High School, their respective principals and coaches, and the entire Hardy County community for their support.

Thank you again to @EastHardyHigh and @moorefieldhs for offering your venues for out football game on Friday night. It is senior night and the game will be played at Yellow Jacket field in Moorefield, beginning at 7:00 pm. Thanks again for everyone’s support during this process.

They also thanked Keyser High School Mineral County schools, and their respective officials for the donation of equipment.

Petersburg High School Athletic Director Travis Liller told the Associated Press the cause of the fire is still being investigated.

WHSV plans to head out to Petersburg on Friday and follow up with the school, taking a closer look at the community support. We'll also be at Moorefield Friday night to cover the game.