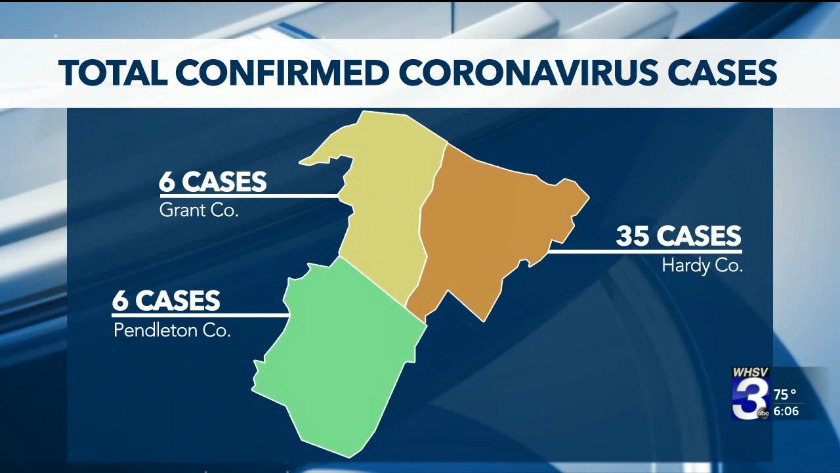 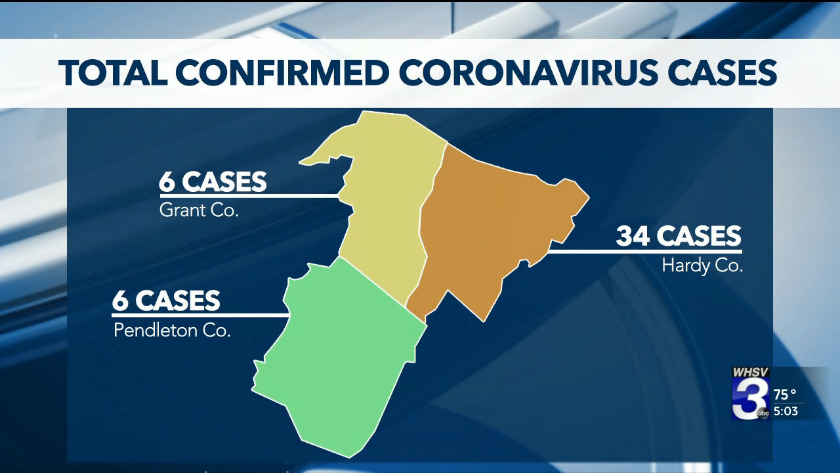 CHARLESTON, W.Va. (WHSV) — As of 5 p.m on May 22, when the West Virginia Department of Health and Human Resources (DHHR) issued their morning update on the COVID-19 case total, there had been 1,705 confirmed cases across the Mountain State — which looks like a sudden increase of nearly 100 cases in the day, but is due to a change in West Virginia's reporting system, because they now include probable cases, like most states have added.

In addition to the new probable cases in the system, two new cases have been identified in Pendleton County, which had remained at just 5 total cases for several weeks.

Along with the latest case updates on Friday evening, the DHHR rolled out new improvements to their state website, including searchable county specific information with demographics on positive cases and individuals tested.

“This information will better inform individuals about what is happening in their own county,” said Bill J. Crouch, DHHR Cabinet Secretary. “It can help guide action, emphasizing the importance of both individual and community prevention efforts. The team at the Bureau for Public Health, led by Dr. Cathy Slemp, her staff and the many partners are to be commended for their hard work, dedication, and research to make this level of detail available.”

The DHHR said the updates also reflect changes in national definitions and evolving technology as more and more is understood about COVID-19 and how to manage it. With shifts in data collection and reporting, they adjusted their site accordingly.

Like in Virginia, West Virginia has begun to see an increase in serology-based (antibody) testing in recent weeks. They say those tests will not be included in their overall dashboard reporting of confirmed lab results for COVID-19, but will be reported separately with the county and lab tests tabs.

Virginia's system includes both a "Total" testing number that includes antibody tests and a "PCR tests only" that excludes it, defaulting to only PCR tests.

According to the DHHR, the new dashboard also reports both active and recovered cases on a county-by-county level.

“Recovery data from case investigations allows us to look at outcomes – following individuals through to their end of illness,” Dr. Cathy Slemp, State Health Officer and Commissioner for DHHR’s Bureau for Public Health.

Virginia does not report that data, because the Virginia Department of Health does not track COVID-19 patients through their illness but only reports identified cases, hospitalizations based on discharge data, and deaths reported by health districts.

Like Virginia's system, West Virginia's new dashboard now also includes "probable" cases, which are people who had symptoms indicating COVID-19 and either an antibody test or a confirmed link to someone else with a lab-confirmed test of the disease, but did not have a lab test themselves.

The CDC recommends those probable numbers be included, though they make up just a small portion of cases to date.

By making those changes to the state system, Friday evening's numbers appeared to jump for the state, and appeared to show an unusual decrease in the number of lab tests, with antibody tests cut out.

But from this day on, updates should continue along the same general path.

For our local counties, here is the latest update:

Hardy County, which at the start of May had six confirmed COVID-19 cases, rose to 34 by Thursday morning, partially due to testing at the Pilgrim's Pride poultry plant in Moorefield and drive-thru testing in the surrounding community last week.

But just over the mountain, in Virginia,counties in the central and northern Shenandoah Valley have confirmed hundreds of cases.

Statewide, a total of 82,747 West Virginia residents have been tested, with 71 confirmed deaths due to the virus.

On Friday morning, that number had appeared as 84,829, but the subtraction of antibody tests from the total testing number makes it look like a decrease.

By Friday evening, testing numbers indicated that West Virginia has tested 4.4% of its population for COVID-19 – significantly higher than the national average of 3.57% and than Virginia, which has tested 2.28%.

Of those that have been tested in West Virginia, 2.06% received positive COVID-19 tests, which indicates about a tenth of a percentage point increase by including probable cases.

Governor Jim Justice's plan for reopening West Virginia calls for that percentage to remain below 3% in order for plans to keep moving forward for phases of reopening the state.

Thursday started Week 4 of that plan, with a large number of businesses able to open back up on May 21, including indoor dining at restaurants, tanning salons, state park campgrounds, and others in time for Memorial Day weekend.

At this point, of the West Virginians who have tested positive for COVID-19, the majority have already recovered.

As of the evening of May 22, 39 patients were hospitalized, 11 were in the ICU, and 1,107 had fully recovered from the virus in West Virginia.

All of that data and more can be found in a slideshow here, updated twice daily.

Medical providers and laboratories electronically report positive test results to DHHR. Once the DHHR has them, they then submit the official numbers to the CDC and update their state website.

As of 5 p.m on May 22, there were 7 confirmed and probable cases in Grant County, 35 cases in Hardy County, and 7 cases in Pendleton County.

Across the state, these are the confirmed cases by county, as of 5 p.m on May 22:

W.Va. attorneys warn that they will charge anyone inciting violence at protests

W.Va. attorneys warn that they will charge anyone inciting violence at protests