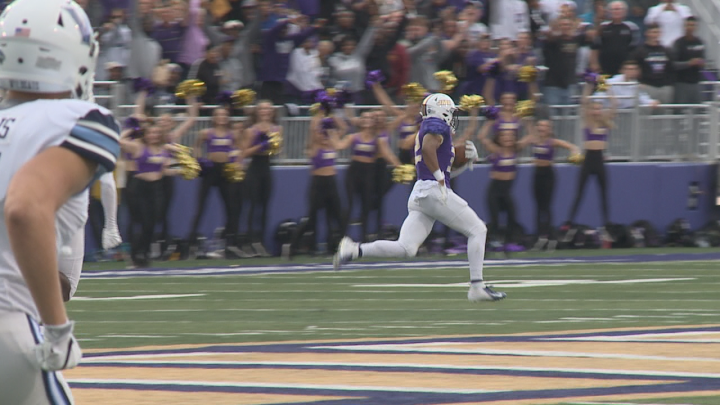 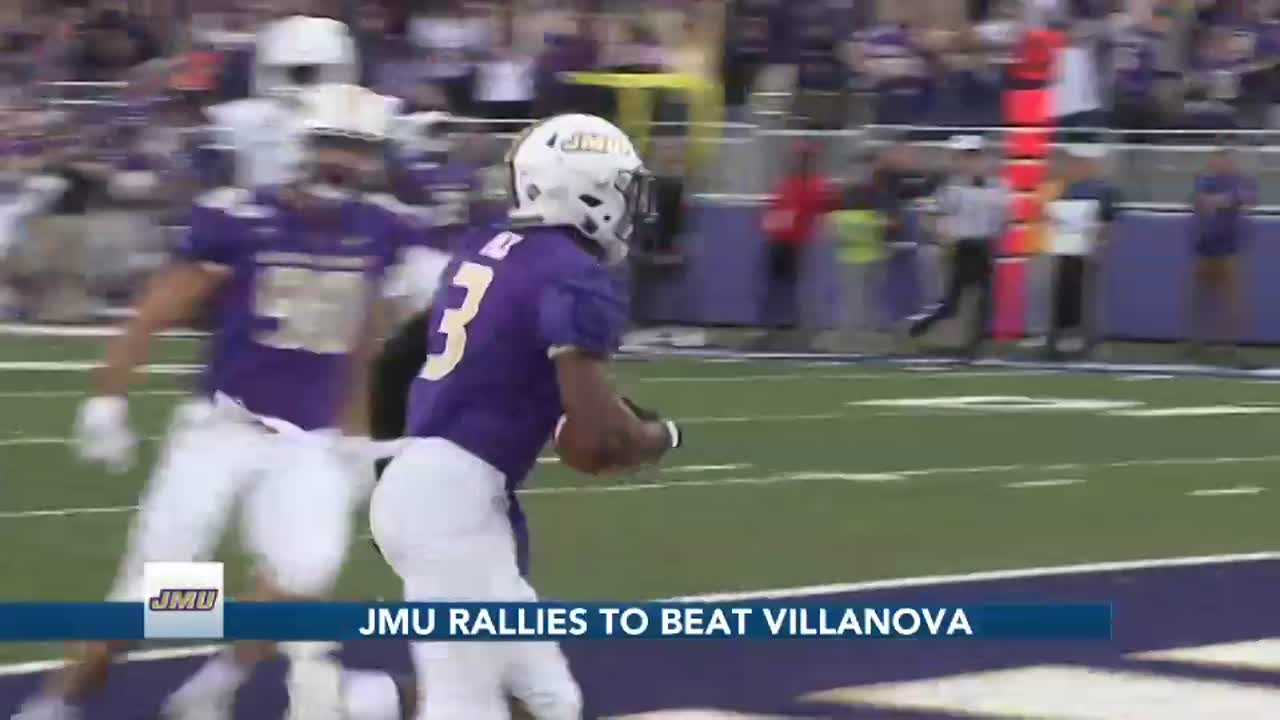 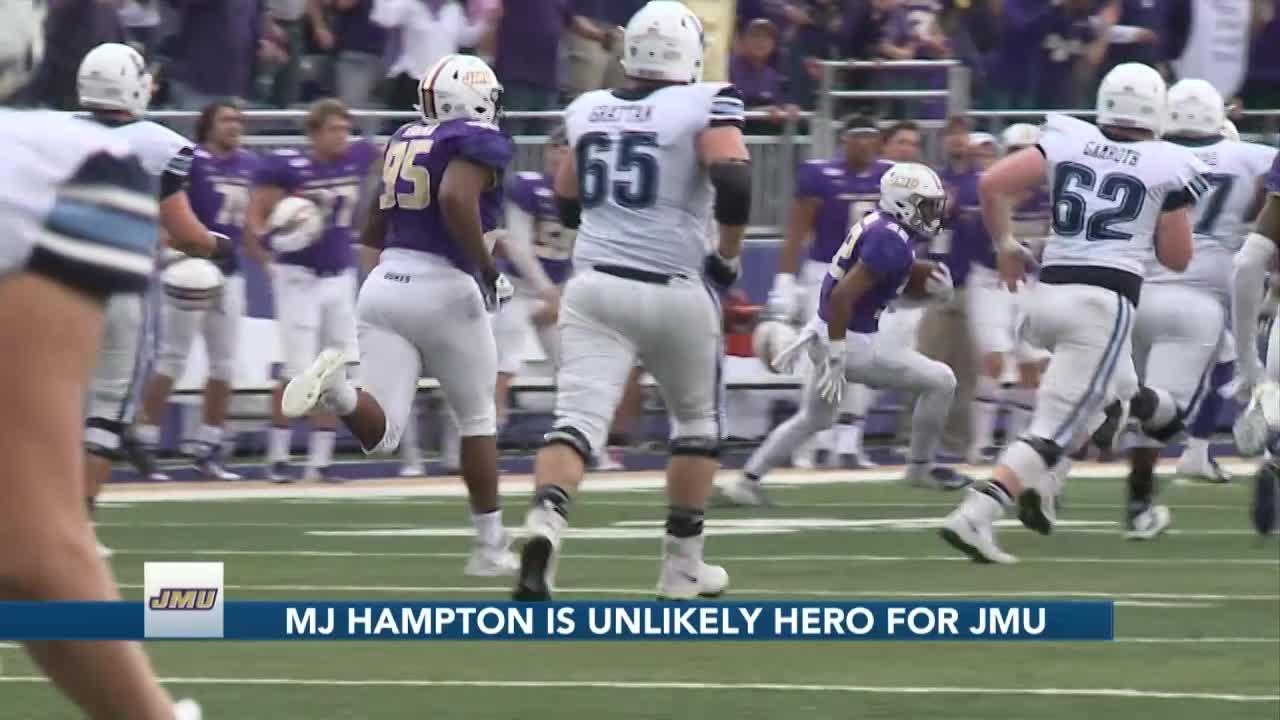 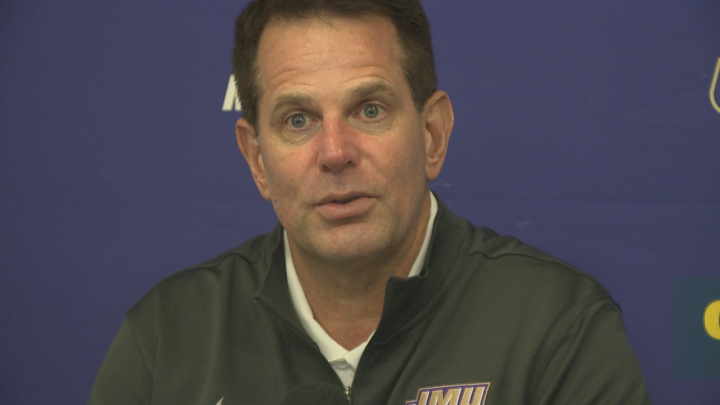 Latrele Palmer rushed 69-yards for a touchdown to help seal win over Villanova.

The Dukes improved to 6-1 on the year and 3-0 in Colonial Athletic Association play, while the Wildcats fell to 6-1 and 3-1. It was JMU’s fifth straight win over Villanova and marked the first time since JMU’s 13-10 win against Stony Brook on Oct. 27, 2018 that the Dukes rallied in the fourth.

Trailing 24-17 heading to the fourth, the Dukes forced a turnover on the opening play of the quarter, leading to a 26-yard touchdown pass from Ben DiNucci to Brandon Polk three plays later to tie the game at 24-24.

On the ensuing drive, Villanova was driving before MJ Hampton picked off his first pass and returned it 83 yards for a pick-six, giving JMU a 31-24 lead with 10:48 to play. After a Villanova missed field goal, Latrele Palmer busted off a 69-yard touchdown rush to put the Dukes up 38-24 with 7:28 left. The Dukes answered with back-to-back interceptions by Rashad Robinson and Adam Smith sealed the win.

Palmer rushed for a game- and career-high 103 yards and a score in the fourth quarter alone, picking up 12.9 yards per carry along the way. Percy Agyei-Obese also tacked on 41 yards on the ground.

DiNucci led JMU's passing attack with 216 yards through the air, tossing three touchdowns without throwing an interception. Riley Stapleton reeled in five catches for 44 yards and two scores, tying his career high, and Polk made four grabs for 44 yards and a score.

John Daka led the JMU defense with career highs of nine tackles, 5.0 for loss and 2.0 sacks, to go with a forced fumble. Smith matched Daka with nine stops, adding his second interception of the season. Hampton tied his career high with six tackles and his day was highlighted by his go-ahead touchdown on his interception. Eight players had at least four tackles in the win.

The Dukes won the turnover battle in Saturday's game, forcing four turnovers (all in the fourth) while avoiding any giveaways. JMU turned those takeaways into 14 points. The JMU offense did a good job extending drives, converting on 56.2 percent of third-down attempts (9-16).

JMU's defense was dominant against the run, limiting Villanova to just 44 yards on the ground. JMU out-rushed Villanova by 114 yards, gaining 158. The Dukes’ defense disrupted the Villanova passing attack late on their way to pulling down three interceptions and breaking up seven Wildcats passes.

Villanova outgained JMU 431-374 in the contest.
JMU won the turnover battle 4-0 after intercepting three passes and recovering one fumble.
JMU had their highest scoring quarter in the fourth, when they put up 21 points.
JMU converted 9 of 16 third downs while Villanova was successful on 6 of 13.
The Dukes totaled nine tackles for loss and added three sacks.
Villanova’s Daniel Smith led the Wildcats’ passing attack, completing 26-of-47 attempts for 387 yards and three touchdowns with three interceptions.
Changa Hodge was Villanova's leading receiver with eight receptions for 134 yards and two touchdowns, and Todd Summers added six catches for 50 yards and a score.
VU’s Forrest Rhyne led all defenders with 13 tackles, adding 3.0 TFLs and 2.0 sacks.

Ethan Ratke also rose to fourth in JMU history in career scoring, as he stands at 228 points and Robinson now stands at tied for sixth with 12 career interceptions.

JMU hits the road for Williamsburg, Va., next Saturday, Oct. 19 to take on William & Mary. Kickoff is set for 3:30 p.m. at Zable Stadium.