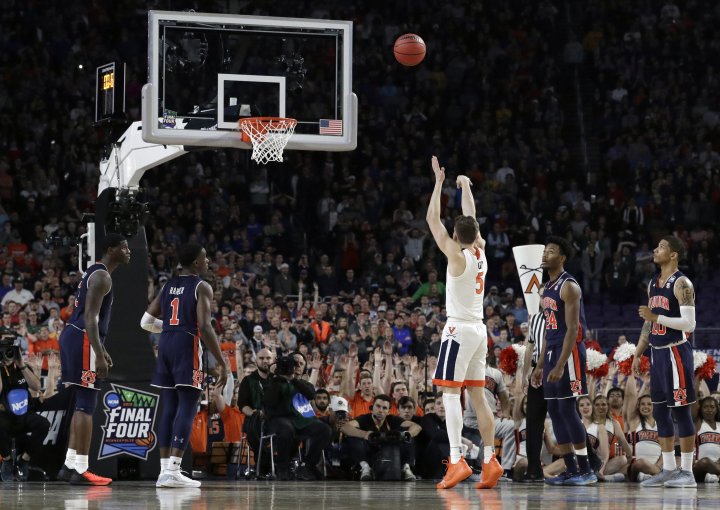 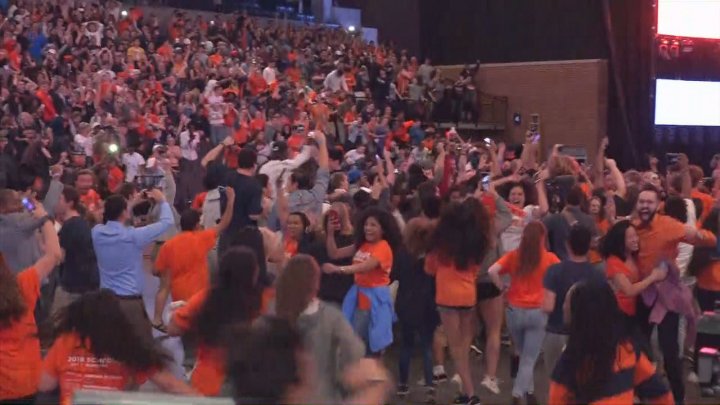 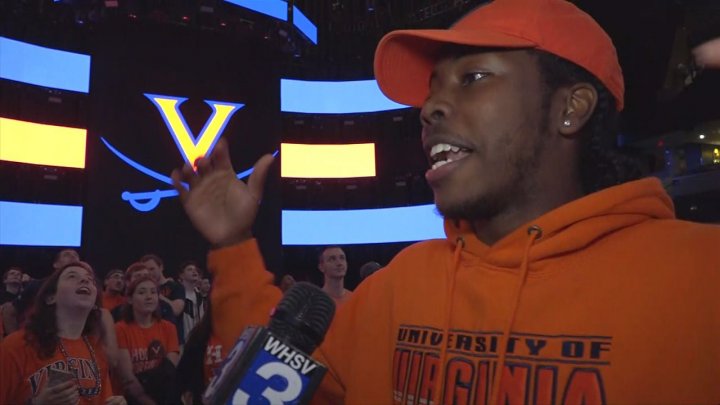 MINNEAPOLIS, Mn. (CBS19 SPORTS) — When talking to the media after Saturday's win over Auburn, Kyle Guy said the loss to UMBC last season was one of the biggest moments of his life and led to Saturday's special moment.

FILE - In this April 6, 2019, file photo, Virginia's Kyle Guy (5) shoots the last free throw to defeat Auburn 63-62 during the second half in the semifinals of the Final Four NCAA college basketball tournament, in Minneapolis. Lost somewhere amid all the agony at Auburn and euphoria at Virginia was the fact that sports are never fair. The tough call that helped push Virginia into the national final was the last of several bang-bang decisions referees had to make without the assistance of slow-motion replay or multiple camera angles. (AP Photo/David J. Phillip, File)

"I feel like all of my life has led to this," Guy said. "Everything that I've been through made it a lot easier to hone in and try and knock down the free throws."

With only three free throws between Virginia and a spot in the national championship game, some say it was only right it was Guy at the line.

"For Kyle to calmly go down there and knock down three free throws after being iced after the second one, it's unreal," junior guard Ty Jerome said. "It's a testament to his mental toughness and his confidence and his focus."

A year ago walking off the court in Charlotte, a moment like Saturday's seemed out of the realm of possibilities, but in the end, it was the loss that made it happen.

"That was one of the best things that ever happened to me because I became a better man, became a better basketball player because of it," Guy said looking back to last year's NCAA Tournament. "So that's why I keep it there. It's much more than just that loss."

Six weeks after losing to UMBC, Guy posted the second of two letters on Facebook, talking about his battle with anxiety, something his roommate Grant Kersey had never noticed.

"He was writing those articles that he put out and I read them before he put them out," Kersey remembered. "That was the first time that I had even noticed anything because he knew he could come to me, but he never talked about it with me. He kind of kept it inside until he felt it was the right moment to bring it out."

Now instead of shying away from the conflict, Guy met it head on, even making his Twitter profile picture a moment after the UMBC game as a reminder.

"After last year, I had to take a lot of time to myself and obviously I wrote the letter," Guy said thinking back to after the loss. "Just tried to do anything that was therapeutic for me, so I could bounce back from it and be stronger as a person. And I think you see the growth in that, not only in myself but the team."

While there are happier moments, adversity has brought Guy and the Wahoos to greatness.

"If you use adversity right, it will buy you a ticket to someplace you couldn't have gone any other way," Guy said, quoting a TED Talk Coach Bennett showed the team. "That's the most powerful thing, we've worn that on our chest all year."

On Monday night, after UVA won their first national championship in history, Guy was voted the Final Four's most outstanding player.

His free throws with 0.6 seconds left to beat Auburn in the semifinals were the main reason, plus his 24 points against Texas Tech to secure the national title.