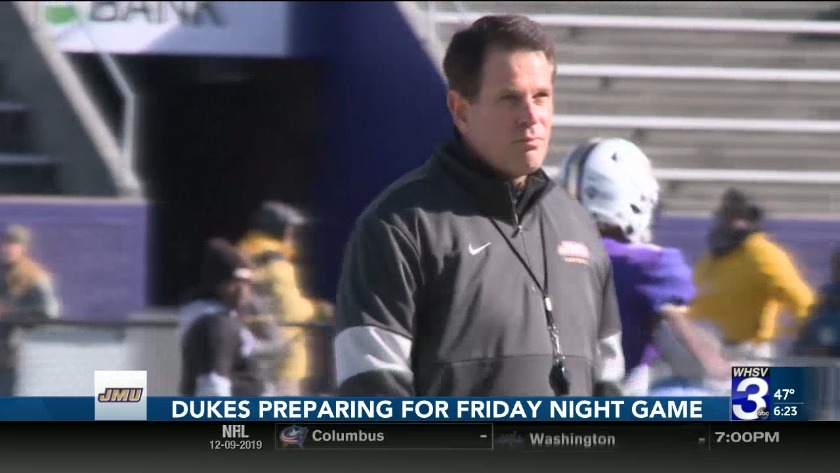 The second-seeded Dukes will host Northern Iowa Friday evening. Kickoff is set for 7 p.m. and the game will be broadcast on ESPN2. It will be JMU's first non-Saturday game this season.

"We will figure out how to make Friday up as much as we can but at this point in the year, we have seen a lot of different looks," said JMU head coach Curt Cignetti. "A lot of different defenses. Sure, every game plan is a little bit different. There will be some new twists and wrinkles but we will be fine."

James Madison advanced to the FCS Quarterfinals with a dominating 66-21 victory over Monmouth this past Saturday in Harrisonburg.

Friday's game between UNI & JMU is one of three FCS playoff games that night. No. 5 Montana St. will host Austin Peay and No. 3 Weber St. will host No. 6 Montana. No. 1 North Dakota State hosts Illinois St. Saturday at 12 p.m. The winners of this week's quarterfinal games advance to the FCS Semifinals on Saturday, December 21.

Dukes add FBS transfer & running back commit
JMU added an FBS transfer Monday morning. Joseph Norwood, a safety from UMass, announced his intent to join the Dukes via Twitter. He started four games for the Minutemen in 2019 and recorded 27 total tackles to go along with an interception. He appeared in 12 games in 2018 and recorded 46 tackles.

The Dukes also added a commitment to their 2020 recruiting class. Kaelon Black, a running back from Salem High School in Virginia Beach, tweeted his decision to commit to JMU.