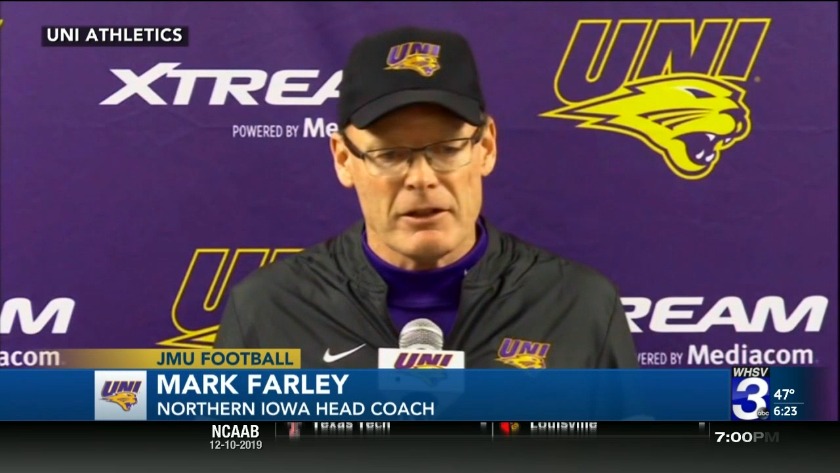 Here is the WHSV First Alert weather team's forecast for Friday:
Cloudy and cold to start with morning temperatures in the 20s. Timing of the rain is key to our day. Earlier arrival means a freezing rain to wintry mix before changing to a cold rain for the rest of the day. Highs only in the mid to upper 30s.

With inclement weather expected, the Dukes are placing even more importance on ball security.

"If it's really coming down and it's cold...you gotta protect the football," said JMU head coach Curt Cignetti. "That's the bottom line."

Both James Madison and Northern Iowa have done a good job protecting the football in 2019. Both teams rank near the top of the FCS in turnover margin. JMU is +12 on the season while UNI is +15.

"With weather like that, it's the little things that are going to make the big difference," said JMU redshirt senior wide receiver Brandon Polk.

Kickoff between the Panthers and Dukes is scheduled for 7 p.m. Friday at Bridgeforth Stadium. The game will be televised on ESPN2.

"We all knew they were good," said Farley. "It was just verifying it when you are watching them on film. The type of talent they have, extremely talented on defense. Just got great speed, great size...offensively they are just so sound and they do what they do and they do it very well."

"It's a top team. It's like playing North Dakota State. It's in that bracket of talent and aggressiveness and discipline within their team so it's a very good football team."

UNI enters Friday's game off back-to-back FCS playoff wins. The Panthers defeated San Diego (17-3) in the first round and No. 7 South Dakota St. (13-10) in the second round.